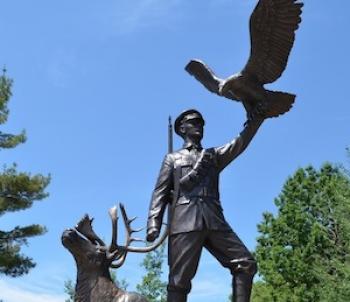 The monument honouring First World War Veteran Frances Pegahmagabow, one of only 39 Canadians awarded the Military Medal three times, was unveiled today in Parry Sound, Ont.  The life-sized bronze monument, created by Sudbury-based sculptor Tyler Fauvelle, is situated on the Georgian Bay waterfront at the Charles W. Stockey Centre for the Performing Arts. It honours Pegahmagabow, who received the most battle awards ever received by an Aboriginal soldier serving Canada.

“Our hope is that this spirit-building public monument will inspire and empower Canadian students of all backgrounds, and resonate strongly with Aboriginal students,” said Roxane Manitowabi, executive director.  “The Great War has passed from living memory,” said Tyler Fauvelle. “A bronze monument is an enduring witness. This one will tell, in its own way, the story of Frances Pegahmagabow, an amazing story that is part of our shared history.” National Chief Perry Bellegarde (Assembly of First Nations), and Lieutenant-General J.M.M. Hainse (Commander, Canadian Army), were among the dignitaries at the unveiling. A 50-soldier Guard of Honour (3rd Battalion, the Royal Canadian Regiment), stood in solemn tribute. Francis Pegahmagabow was born and raised in Shawanaga First Nation.  Enlisting in 1914, he fought overseas for virtually all of the First World War, seeing action at the Second Battle of Ypres, the Somme (where he was wounded), and Passchendaele. A superior scout and sniper, he was one of only 39 Canadians to be awarded a Military Medal and two bars. In Canada’s history, no other Indigenous soldier has ever received as many battle awards. Settling at Wasauksing First Nation, where he was twice elected Chief, he continued to fight – this time, for the traditions, rights and self-government of his people.  He was a founder of the Brotherhood of Canadian Indians, and twice served as Supreme Chief of the National Indian Government.  “We are so grateful for the contributions and assistance we’ve received,” said Roger Chum, president of ONECA. “The generosity and goodwill of the Pegahmagabow family, the communities of Wasauksing and Shawanaga, the Town of Parry Sound, the Department of Canadian Heritage, the Royal Canadian Regiment, the members of ONECA, and of everyone who supported this work of respect and remembrance, is truly heart-warming. It’s the spirit of reconciliation.”

Read more on Frances Pegahmagabow - his life and his achievements. 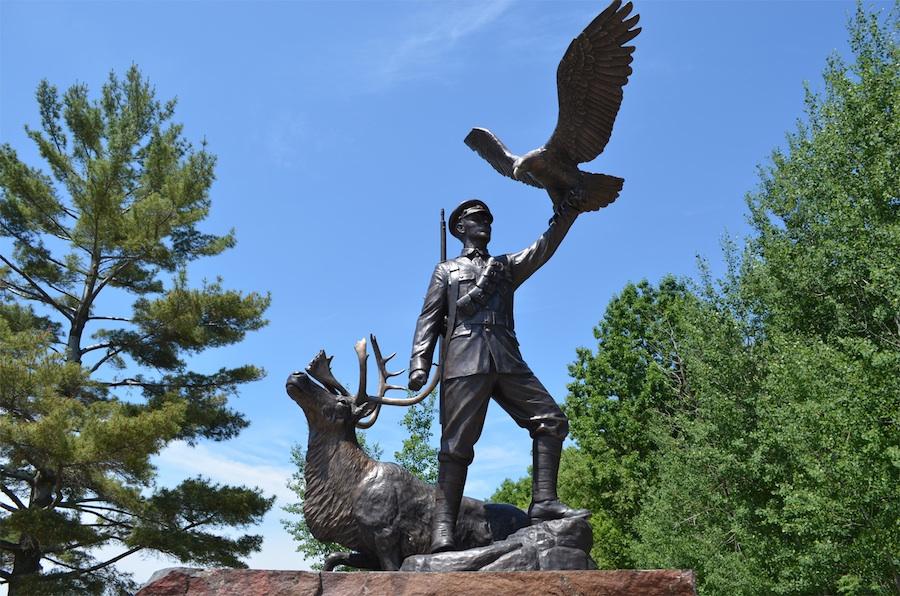