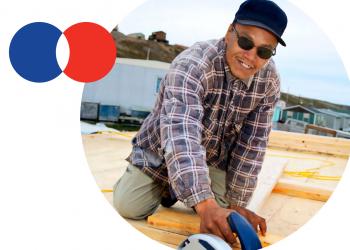 The Conference Board of Canada has released a report on Indigenous entrepreneurship in northern and remote communities across the country.

“The trend is real even though we can’t put a specific number on it.” —Stefan Fournier, the director of Indigenous and Northern Communities for the Conference Board of Canada.
By Sam Laskaris
Local Journalism Initiative Reporter
Windspeaker.com

Indigenous entrepreneurship is on the rise.

Yet many Indigenous people in the northern parts of the country and in remote communities continue to face numerous obstacles to self employment.

These were the findings of a research report released Monday, June 15, by the Conference Board of Canada, the country’s leading evidenced-based applied research organization.

The 25-page report is titled Support for Success: Indigenous Entrepreneurship in Northern and Remote Canada.

Indigenous businesses in the northern portions of seven provinces—British Columbia, Alberta, Saskatchewan, Manitoba, Ontario, Quebec and Prince Edward Island—were studied, as were those in the three territories and the province of Newfoundland and Labrador.

The initial part of the report shows that, according to the 2016 census, there were 54,255 Indigenous people in Canada who reported being self-employed.

This marks an increase of more than 32,000 people compared to 1996 figures. It also represents an annual average growth of 4.9 per cent over those two decades.

But Stefan Fournier, the director of Indigenous and Northern Communities for the Conference Board of Canada, said it is impossible to get a precise accounting of Indigenous entrepreneurship in Canada because collecting on-reserve data has proven difficult.

“The trend is real even though we can’t put a specific number on it,” Fournier said, adding other Conference Board of Canada reports involving Indigenous issues often face similar concerns.

Another key finding from the report is that while Indigenous entrepreneurship is increasing in the research area, Indigenous people remain under-represented in self-employment categories.

According to 2016 stats, Indigenous people represented about 4.0 per cent of Canada’s labour force.

Indigenous people, however, only accounted for about 2.5 per cent of those listed as self-employed.

Yet another key finding was the fact that while some Indigenous people aspire to run their own businesses, they often do not have adequate resources to ensure success and face significant socioeconomic constraints.

“They have to think about how the supply system works,” Fournier said. “It costs a lot to bring goods into a (remote) community.”

In many cases, simply finding a spot to operate a business in a northern location can be challenging.

“There’s often not a lot of available extra space to set up shop in the communities,” Fournier said, adding it is not always possible to run businesses out of already overcrowded houses, community centres or administration offices.

The report finds the lack of infrastructure, including limited or no telecommunications or roads, also hinder Indigenous entrepreneurs in northern and remote communities.

Plus, in many cases, northern entrepreneurs are trying to run businesses that target small or isolated populations.

The report also listed Indigenous people’s motivations to pursue entrepreneurship—finances, personal agency and self-determination, as well as community and culture were noted.

In terms of finances, often one seeks to become an entrepreneur primarily because there are no other regular employment opportunities available in a community.

“It offers up a source of gainful income,” Fournier said. “And it allows one to choose their own path.”

For those that choose to do so, gaining financial independence can enable individuals to remain in their own communities.

As for personal agency, the report states some individuals seek to operate their own business in order to be their own boss and have the ability to set up their own schedules and workloads. They can also utilize the skills they have to do a job they enjoy.

And yet another reason why some pursue entrepreneurship in northern and remote Indigenous communities is because of a desire to fill a community need or to share their culture through business.

In some cases, a business could end up providing jobs for others in the community as well.

Financial obstacles, however, were listed in the report as a key challenge that Indigenous entrepreneurs encounter.

These financial barriers include having insufficient capital, less than ideal credit and unsatisfactory valuations.

The report also stated that the 2016 Aboriginal Business Survey found that more than half of Indigenous entrepreneurs, 51 per cent, had problems finding funding.

This is not uncommon though as the 2018 Canadian Entrepreneurship Census found that 75 per cent of all entrepreneurs in the country had challenges finding funding.

Also 45 per cent of respondents to the 2016 Indigenous survey said they had challenges meeting loan requirements.