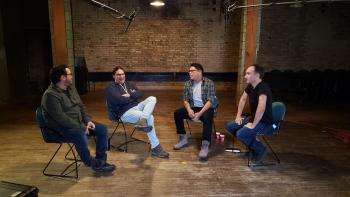 “Our number one goal right now is to break the cycle of abuse and violence that’s plagued my family and previous generations for so long.” — Pete Kytwayhat from the film Indigenous Dads
By Sam Laskaris
Local Journalism Initiative Reporter
Windspeaker.com

There is no shortage of Indigenous content at this year’s Vancouver International Film Festival (VIFF).

Almost 200 feature films and shorts will be shown at the 40th annual edition of the festival and 17 of those are Indigenous made.

This year’s VIFF, which runs from Oct. 1 to Oct. 11, will offer both in-person and online screenings.

One of the short films at the festival is titled Indigenous Dads. This 11-minute film features four Indigenous men, including director Peter Brass, a member of Peepeekisis Cree Nation, simply sitting on chairs in a theatre discussing their lives.

The men not only candidly talk about their own childhoods, but their lives as parents, including their worries, challenges, hopes and goals.

“When I became a dad I was 25 years old and I was going to university and all of a sudden we have a baby,” Brass said. “And I just switched. Every decision I made after that was in service to this baby.”

In his film, Brass also utilizes numerous images of all four fathers, as well as their children, humanizing the work even more.

Teddy Bison, a member of Ocean Man First Nation, is one of the other fathers in the film. His first child was born when he was 15 and now he’s a father of four.
Indigenous Dads also features Pete Kytwayhat, a member of Makwa Sahgaiehcan First Nation in Saskatchewan, and Skyler Anderson, a Cree who was born and raised in Regina and has family ties to Peepeekisis and George Gordon First Nations.

Kytwayhat, who has one son, touches on a priority for his family.

“Our number one goal right now is to break the cycle of abuse and violence that’s plagued my family and previous generations for so long,” he said.

VIFF will also run feature film Ste. Anne. Director Rhayne Vermette brings viewers the story about how she returned to her Métis community in Manitoba that she had once turned her back on.

Instead of being openly welcomed back, however, she is viewed as an outsider.

“Refracting the beauty of Treaty 1, Ste. Anne traces an astral geography between myself and my family, in particular my father,” she said. “Threads of the familial and personal extend themselves deep throughout the project, and these bonds are what supported the film, which was essentially the result of a collective leap of faith into a very slow and fragmented process of filmmaking.”

Besides Vermette and her father, the film includes her mother, brother, godfather, niece, cousins, aunts and uncles.

“Meanwhile, non-actors and crew who rounded out our cinematic family were also heavily immersed into our film’s world through a kinship which evolved over our meditative unraveling of the story,” Vermette said.

Vermette studied architecture at the University of Manitoba. While in university her passions became storytelling and image making. Ste. Anne is her debut feature narrative.

Other Indigenous films at VIFF include Kiri and the Girl, Mary Two-Axe Earley: I Am Indian Again, Returning Home and Portraits from a Fire.

Kiri and the Girl, which will have its world premiere at VIFF, was inspired by the story of Tlingit artist Kiri Green, who tries to come to grips with the loss of her mother and ends up reclaiming her Indigenous heritage.

Mary Two-Axe Earley: I Am Indian is about the woman who spent a huge part of her life fighting Indian Act gender injustices. Earley’s work led to the passing of a bill that amended the Indian Act, Bill C-31.

As for Portraits from a Fire, this film is about a teenage boy from the Tl'etinqox reserve in British Columbia. The teen must deal with his life after a tape surfaces that changes the previously thought truth of the boy’s family history.

More information on this festival, including how to purchase online versions of movies, can be found at www.viff.org