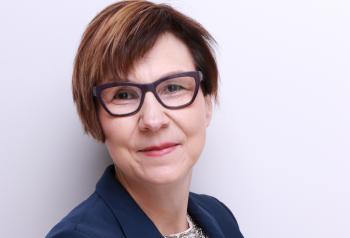 Cindy Blackstock, executive director of the First Nations Child and Family Caring Society, is the recipient of the Spirit of Leadership award bestowed by the B.C. Government and Service Employees' Union.

Kukpi7 Rosanne Casimir “sent an echo through the Canadian consciousness about how grave the injustices have been by the federal government towards First Nations, Métis and Inuit children…” — Cindy Blackstock
By Cara McKenna
Local Journalism Initiative Reporter
Windspeaker.com

Indigenous children’s advocate Cindy Blackstock has been named the recipient of an award for her leadership.

Blackstock was given the 2021 Spirit of Leadership award on June 10 by the B.C. Government and Service Employees' Union during its convention.

She used her acceptance speech to point to what she says is a critical moment in Canadian consciousness.

Blackstock is Gitxsan and the executive director of the First Nations Child and Family Caring Society, which has been advocating for the rights of First Nation children and their families for about two decades.

The award comes just before Blackstock prepares to face the federal government in court over First Nations child welfare on Monday, and as the country is still reeling from the discovery of 215 unmarked graves at the former residential school in Kamloops, B.C.

“I feel a sacred obligation to those 215 children, and all the children who are yet to be found, and the survivors, to make sure that their wish that this does not happen to their grandchildren is realized,” said Blackstock after accepting the award via live video.

“That we together marshal all our resources to ensure this is the first generation of First Nations, Inuit and Métis children who don’t have to recover from their childhoods.”

The Spirit of Leadership award is given every three years by the union to an individual or organization to recognize their contributions to social issues.

Blackstock spoke about what an important time it is for Indigenous children’s rights. She pointed to leadership by Tk’emlúps te Secwépemc to uncover the mass burial site at Kamloops Indian Residential School.

“The past couple of weeks we heard the news of the hard work of the Tk’emlúps te Secwépemc to find their children,” she says.

Kukpi7 (Chief) Rosanne Casimir “sent an echo through the Canadian consciousness about how grave the injustices have been by the federal government towards First Nations, Métis and Inuit children, and compelled people to think about what they might do, in this moment, to change things.”

Blackstock spoke about how injustices from the federal government continue, and invited the public to follow along as she and her organization prepare to face Canada in Federal Court next week.

Canada is attempting to overturn two Canadian Human Rights Tribunal orders, one around Jordan’s Principle eligibility, and another around compensating First Nations children who were discriminated against in the child welfare system.

The hearings will be webcast and are open to public viewing via registration on the Federal Court website.

“This past week, the House of Commons passed a ... motion that Canada ought to stop its litigation against First Nations children,” Blackstock said.

“Despite this going forward, we’re getting ready to go to court again on Monday. We will have a week of hearings to respond to Canada’s two court applications.”

Blackstock said she is not backing down. She said First Nations children are overrepresented in the foster care system because of effects stemming from intergenerational trauma.

“We’ve already made a lot of progress. Hundreds of thousands of kids are now getting help that they wouldn’t have got before,” she said.