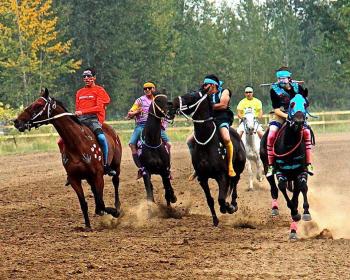 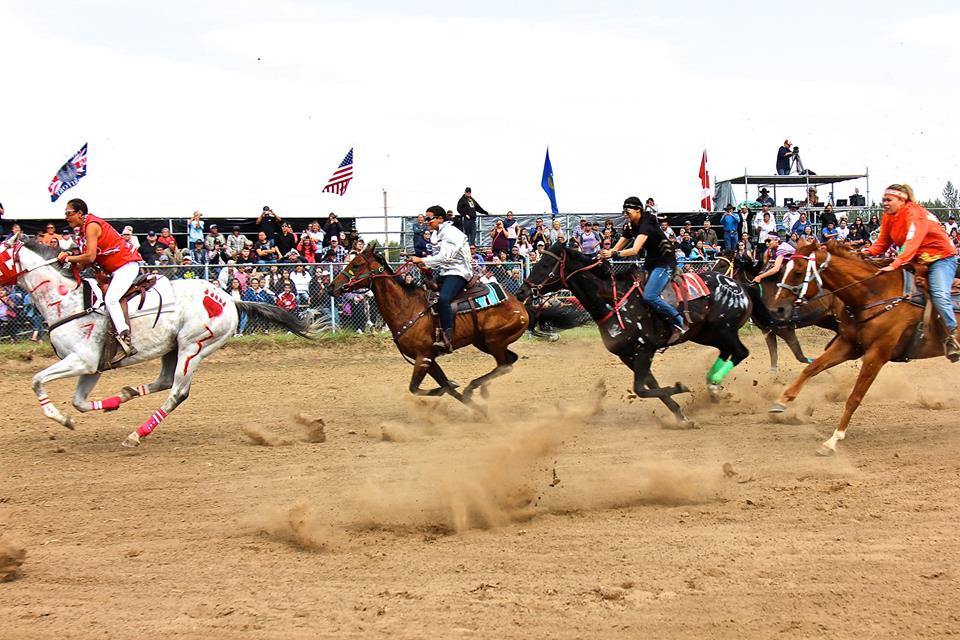 Canada will be well represented at the North American championships for a sport that is booming in a couple of western provinces.

Nine Canadian squads – six from Alberta and three from Saskatchewan – will compete at the Championship of Champions event for Indian relay racing.

This competition, which begins Friday and continues until Sunday, will be staged in Walla Walla, a city in the state of Washington.

This event is considered the North American championship for the horse racing sport, which currently only features competitions in Canada and the United States.

Though the Canadian Indian Relay Race Association (CIRRA) is only two years old, board member Winston Bruised Head said the sport has been around for generations.

“These races are not new,” he said. “We’ve had these types of races since Natives first started using horses.”

As its name implies, Indian relay racing is a team activity. Each squad has three jockeys and three horses.

One horse with its jockey on board per team sprints one lap around a race track and then a relay exchange with another horse and jockey is completed. Two relay exchanges per team occur in every race.

Each team, however, consists of four members. For starters, there is a jockey, which is also known as a warrior. Then there is a mugger, whose job it is to catch the horse as it completes its lap.

There is a holder, also called a setter, whose responsibility it is to prepare the next horse which will run a lap. And there is also a backholder, who is in charge of preventing the team’s third horse from interfering with the frantic activity.

All team members that have competed at CIRRA events have been Indigenous. For the most part they are all-male squads, except for some clubs that have a female backholder.

The track action is most obviously more furious with an increased number of teams competing. Some CIRRA events have featured five or six squads per race.

“During the exchange you have horses coming in and horses going out,” Bruised Head said. “They are big strong horses. They’re thoroughbred horses that are bred to run.”

The winning team for each race is the club that crosses the finish line first.

“They like the excitement because it is anybody’s race,” Bruised Head said of the increasing number of fans who are attracted to the sport. “Once they come into the exchange, anything can happen.”

What has been happening is that the sport has been growing by leaps and bounds in western Canada in recent years.

In order to have Canadian representation at the annual North American championships, a rule stated participants must have previously competed in a sanctioned event in their own country.

As a result, a sanctioned competition was held five years ago in Strathmore, Alta., allowing for Canadian representation at the Championship of Champions.

Officials from the sport then formed the CIRRA in 2017. Seven tour events were held in Alberta and Saskatchewan a year ago.

The association then staged 10 events in 2018, including the Canadian championships held earlier this month on Alberta’s Enoch Cree Nation.

CIRRA President Dexter Bruised Head (Winston’s cousin) said his association will in all likelihood be adding more events in the coming year, possibly expanding to British Columbia and Manitoba as well.

“We have some big plans for 2019 now that we know we have a global audience,” he said.

Dexter Bruised Head said he discovered the sport’s popularity when he uploaded some footage of races to YouTube in the middle of the night.

Within minutes he noticed plenty of views and comments for his videos started coming in from people as far away as Australia and New Zealand.

Since those countries have large Indigenous populations, Dexter Bruised Head believes it might not be long before Indian relay races start being held there.

CIRRA officials, however, are most focused on growing the sport in Canada.

CIRRA tour events all currently have a prize purse of a minimum of $10,000. Since they realize how costly it is for squads to travel to events, all entered teams do end up getting a share of the prize money.

But with an increased number of competing clubs at CIRRA events – sometimes more than 20 teams are entered in a race – winnings are reduced.

“Now that we’re getting into the 20s (with the number of squads participating), those payments get stretched out,” said Dexter Bruised Head, who is hoping to possibly even double the minimum prize purse at CIRRA events in 2019.

He believes that is feasible considering the large crowds being attracted to CIRRA events. This year’s two-day Canadian championships attracted about 2,500 spectators per day.