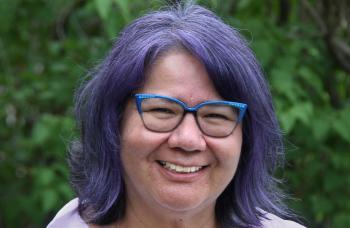 RoseAnne Archibald is one of seven candidates running for the position of national chief of the Assembly of First Nations.

“The Ontario region is the largest region in Canada, the most populous region, and it's very complex, very diverse and has many facets that are mirrored in the national picture.” — RoseAnne Archibald
By Shari Narine
Local Journalism Initiative Reporter
Windspeaker.com

“A lot of my work in leadership is really based upon the spiritual calling to do the work,” said RoseAnne Archibald about how she came to the decision to run for the position of national chief of the Assembly of First Nations.

“I always enter into ceremony and do different ceremonies, not just one, in order to be clear that the decision is an actual spiritual calling for me to do the work. I rarely make decisions like this by anything other than ceremony.”

Archibald has served as a chief since 1990, including the past three years as Ontario regional chief. She believes this experience will be valuable in the new position.

“The Ontario region is the largest region in Canada, the most populous region, and it's very complex, very diverse and has many facets that are mirrored in the national picture,” she said.

Despite the infighting and alleged data breaches, financial concerns, and bullying and harassment claims that have plagued the AFN executive this past year, Archibald said chiefs have spoken to her about the need for stability instead of wholesale change.

“At the same time we need someone who has a unique and fresh perspective... There's never been a woman national chief and to me that fresh perspective comes from that space. It really is a combination of somebody who can embody stability and strength, who is known to have a steady hand,” said Archibald.

A national chief needs to know how to “lead from different spaces” which means from behind, from beside and from the front. However, Archibald feels there’s less of a need to lead from the front at the national level and more of a need to support First Nations in reaching their goals and aspirations.

“This is the kind of leadership we need at the national level, somebody who can create a consensus-based agenda while at the same time respecting regions and respecting the autonomy of First Nations,” she said.

Archibald would like to see the AFN divided into distinct arms, one administrative and the other political, and this restructuring is what she sets as her first priority.  Right now, she says, the administrative and political arms are “too enmeshed.” Changes would see the political body doing outreach with the regions and bringing issues forward to determine where the national organization can work together. If no consensus can be built, says Archibald, the national organization does not proceed.

As for interacting with the federal government, Archibald says it’s about setting “healthy boundaries” between Ottawa and the AFN “and that is based on building good relationships while at the same time holding the government to account when they are undertaking activities that negatively impact our people.”

She says one of her first discussions with the federal government will be to hold them accountable for implementing the 94 Calls to Action from the Truth and Reconciliation Commission.

Her second priority is ensuring recognition of inherent and treaty rights by both the federal and provincial governments.

“Not everybody has a treaty but we do all have inherent rights that were given to us by the Creator.  These are natural laws, Great Spirit laws; these are the foundation of who we are as a people,” she said.

Her third priority is respecting each nation.

“What we need to do is the reverse and I know we can do it because I've seen us do it in Ontario with a big diverse region like ours,” she said.

Archibald believes it is time for the “right woman” to be national chief. She said a calling to leadership is a “sacred duty.”

“Every time we've seen women move into these positions everyone will agree that positive change has happened because of the unique heart-centred approach. But at the same time, women are able to hold two spaces. Women can be strong and the other is to be loving and kind and to be heart-centred. And those values and those traits are what are needed now today,” said Archibald.

“There’s a saying: The end is inherent to the means, so how you get to a place in life matters. How you walk that road matters. To me that’s what I would like to communicate more.”