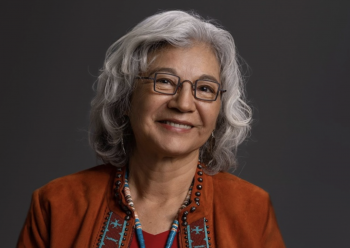 “The fame and the accolades are really wonderful and great, but I don’t want them to ruin me. To me it’s really important that I remain grounded and reachable.” — Louise Bernice Halfe
By Sam Laskaris
Local Journalism Initiative Reporter
Windspeaker.com

Louise Bernice Halfe serves as the Canadian Parliamentary Poet Laureate. The Cree poet/author/storyteller, who grew up on Saddle Lake Cree Nation in Alberta, continues her daily journaling, a process which launched her literary career.

“Writing a journal every day teaches you self-discipline,” Halfe said during an online REDTalk, organized this past Friday, Jan. 14 by Red Sky Performance, a Toronto-based contemporary Indigenous performance company.

Those journal entries are private.

“Nobody in my house has ever looked at my journals,” Halfe said. “And that’s called respect. That’s called safety. And you must have that.”

Halfe was appointed the Canadian Parliamentary Poet Laureate in January of last year. She is the ninth Canadian to hold the title.

The position was created in 2001. Responsibilities of the role include encouraging and promoting the importance of literature, culture and language in Canadian society.

Halfe, who lives in Saskatoon, is also the Elder in Residence at the University of Saskatchewan.

“We have morning circles on Monday, usually about two hours long,” she said, adding sessions are on Zoom. “What I prefer to do is share my story and my examples and show where I’m at and how I’m dealing with.”

Halfe has dealt with her share of challenges in life. Her grandmother raised her for some time while her mother was in a sanatorium.

When she was seven, Halfe was forced to attend a residential school in St. Paul, Alta. She battled addictions later on in life and has gone on to become an award-winning poet for several of her published books.

“I come from small beginnings of a shack, family violence, my own self-destruction and my own recovery and going into residential school,” she said. “I keep most things close to my heart. That’s what keeps me grounded.”

Halfe, who read several of her poems during her REDTalk, added she does not let praise get to her.

“The fame and the accolades are really wonderful and great, but I don’t want them to ruin me,” she said. “To me it’s really important that I remain grounded and reachable.”

Halfe’s first book, Bear Bones & Feathers, came out in 1984 and earned her some praise for feminist exposure.

She’s evolved as a poet since then.

“I was just finding my voice,” Halfe said of her initial book. “I’m not an adolescent voice anymore. I’m a mature voice. And so, with that mature voice comes a little bit of sophistication on how to address a subject.”

“With the position I’m in as parliamentary poet, I can’t become political and say things I would like to say,” she said. “But I do it a little bit in my writing.”

Halfe said there are plenty of issues in Canada now that she is concerned with.

“There’s all kinds of concerns in this country,” she said. “All of us have a hand in the destruction of this planet. Nobody is exempt because we’ve been dragged into it.”

Some of these concerns include climate change, racism and the economic situation.

“We all need to address those things,” she said. “We’re all responsible.”

With her latest book, however, Halfe also took on a less serious tone.

“In our community there’s a lot to write about,” she said. “We have dozens and dozens of topics we can come up with.

“I was looking for something much more lighthearted. I wanted to demonstrate that Native people are passionate and funny. We’re not as stoic as we appear to be. They just don’t know that. But amongst ourselves we are full of laughter.”