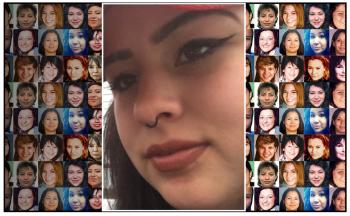 Willow died May 1 in a flophouse, the day after Edmonton closed the downtown Convention Centre on April 30 where she was staying. It was being operated as a temporary winter shelter.

“The counselling didn’t work because it was not consistent. There was always someone different coming.” — Donna Badger
By Shari Narine
Local Journalism Initiative Reporter
Windspeaker.com

Donna Badger remembers well the day the Edmonton Police Service (EPS) knocked on her door to tell her that her 16-year-old granddaughter had been found deceased. It was May 4, 2021, one day before the National Day of Awareness for Missing and Murdered Indigenous Women and Girls and Two-Spirit people.

“They had her body for days,” said Donna.

EPS says at the time of Willow’s death on May 1 they were unable to find identification on her.

“As a result, identification through fingerprinting was requested by investigators. This process can only be undertaken at the Medical Examiner’s (ME) office. When Ms. Badger’s identity was confirmed by the ME’s office, her next of kin was notified,” said Carolin Maran, communications advisor with the EPS.

Donna says her granddaughter always had a backpack with her in which she carried a sketchbook and clothes. She says police told her they couldn’t find it.

Donna says EPS told her that her granddaughter was found in a “flophouse,” a vacant home used by drug addicts and the homeless.

Up until that point, Willow had been staying in the Edmonton Convention Centre downtown, which had been set up by the city as a temporary shelter. In October 2020, the city re-purposed the centre, which had been closed due to pandemic-safety measures, as a temporary accommodation site for the homeless during the winter months. The centre slept 300 people and served 400 people during the day.  The city closed the centre as a shelter on April 30.

“My granddaughter was pretty smart. She would always try to find a safe place to stay,” said Donna. “Maybe she ended up (at the flophouse) with other kids.”

The cause of Willow’s death is still under investigation, said Maran.

“I can confirm that investigators are waiting for a toxicology report, which often takes several months. At this time, Ms. Badger’s death has been deemed non-criminal in nature... Should this change, investigators will advise Ms. Badger’s next of kin, and the EPS will keep the media apprised,” said Maran in an email to Windspeaker.com.

Donna says she was informed by the police that Willow had two suicide notes on her. She says her granddaughter had a boyfriend she was living with for six months and they had recently split up. However, she has a hard time believing Willow would take her own life.

“Not that I’m refusing to believe any of this stuff. I’m willing to listen to everything, but I don’t want to buy suicide. That’s not an option for us. She loved life and people. She loved to be free. Something bad happened to her,” insists Donna.

The past three or four years for Willow had been difficult.

At around 12 or 13 years of age she started “taking off from home.” Her mother and grandmother would drive around looking for her and bring her back home. However, she continued to stray, hanging around with kids, learning where to stay, how to get food and “whatever they do to get money.”

This behaviour started in Edmonton and continued when Willow and her mother relocated to Calgary and Red Deer. Donna spent much of her time travelling from her home in Calgary to help her daughter with Willow in the other two cities. Donna says they would phone the police and report Willow as missing and the various police forces would respond and help to find her. At different times, Willow’s name was included on missing persons websites.

Donna stresses that Willow “was never homeless. She always had good things because we’d always buy her stuff.”

However, Willow’s parents splitting, her father an alcoholic, and her much-loved uncle dying tragically, all contributed to the lifestyle that Willow adopted. Both Willow and her mother “had a hard time” dealing with the uncle’s death, Donna said.

“The counselling didn’t work because it was not consistent. There was always someone different coming,” said Donna.

In Red Deer, Willow ended up on the streets again, seeking safety at a youth shelter, which Donna says resulted in even more problems. Eventually, Willow ran into trouble with the law and also received counselling from child welfare.

Because Willow’s mother had medical issues, they ended up returning to Edmonton where Willow’s decision to stay away from home led up to her death.

“My problem is I want to ask for a police inquest. I don’t want to leave it alone,” she said.

The investigation that Donna is most likely to get may be one carried out by the Office of the Child and Youth Advocate (OCYA).

“We would receive notifications of all serious injuries and deaths of young people receiving a designated service, including counselling,” said Tim Chander, communications manager with the OCYA.

Under the Child and Youth Advocate Act, the OCYA has the authority to conduct “systemic and mandatory investigative reviews … when a young person is seriously injured or passes away while receiving designated services at the time of the serious injury or death, or had received child intervention services within two years of their death, if in the opinion of the Advocate, the investigation is warranted or in the public interest,” according to the OCYA website.

Willow was laid to rest at her family’s plot on Sturgeon Lake First Nation.