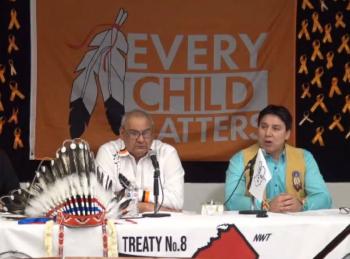 “This work is really hard but really important to me as a relative but also as someone who is very committed to using the best possible scientific methods, being very true to the data we can collect in this process, and I just feel humbled to be able to bring both of those things to this work.” — Dr. Kisha Supernant, director of the Institute of Prairie Archaeology at the University of Alberta
By Shari Narine
Local Journalism Initiative Reporter
Windspeaker.com

An almost one-acre search in an area identified by survivors, Elders and archival records has resulted in the location of 169 possible unmarked graves around the site of the Catholic Church-operated St. Bernard’s Indian Residential School at Grouard northeast of Edmonton.

The emotional announcement came this afternoon from Chief Sydney Halcrow of the Kapawe’no First Nation, which initiated and funded the search. Alongside Halcrow were Treaty 8 Grand Chief Arthur Noskey and Dr. Kisha Supernant, director of the Institute of Prairie Archaeology at the University of Alberta, which led the ground-penetrating radar and drone work at the site.

“The work completed is just a tip of the iceberg and the beginning of uncovering our truth,” said Halcrow.

The one-acre search, which was conducted with GPR in four general areas over six days in October 2021, marks only the first of three phases to be undertaken. The remaining two phases will include searches of a second residential school site, the Anglican Church-operated St. Peter’s, along with the Northwest Mounted Police barracks and Indian agent structures.

Supernant explained that the parish records indicated that many children who had died while attending St. Bernard’s had been buried in the community cemetery.  Areas without grave markers were searched. Based loosely on the organization of the cemetery, 107 probable graves were identified.

“We do not need ground-penetrating radar results to know that children didn’t come home from this school. The knowledge of survivors and the extensive archival records already contain clear information about children dying while in residence here,” said Supernant.

For Supernant, who has been involved in searches for unmarked graves at other residential school sites, this particular search has been personal

Supernant is Métis and her family has “long connections” to the area. Many of the names on the parish record she recognizes as family surnames, including a version of “Supernant.”

“This work is really hard but really important to me as a relative but also as someone who is very committed to using the best possible scientific methods, being very true to the data we can collect in this process, and I just feel humbled to be able to bring both of those things to this work,” said Supernant.

Noskey said at this point there were no plans to exhume any of the graves. He said it was “not in our culture.” However, he said if that was what the public needed the Elders may consider taking that action.

However, Supernant said there are other non-evasive measures that can be taken to support the interpretation that these are graves.

“It should definitely be in the hands of the nations to make that decision about what they actually do,” she said.

Indigenous children from around the area attended both the St. Bernard and St. Peter’s residential schools.

“As survivors of the residential school system we are aware of the abuse and crime children endured at these institutions. Now with ground-penetrating radar technology, the rest of the world can see the truth we’ve always known. These are not schools. These were not schools. They were institutions established to kill the Indian in the child. And as the number of children found in graves continues to climb, we see it was never about erasing who we are, but eradicating us all together. Genocide,” said Noskey.

There are 10 other residential schools in the Treaty 8 area, some on reserves and some not. Halcrow said he anticipated the work undertaken by Kapawe’no First Nation could be used as a blueprint moving forward.

Noskey said that he hoped for ongoing cooperation not only from the churches, but also the municipalities and private landowners for wherever searches needed to happen.

“We ask for your assistance that this would be an unhindered process for us to bring closure to this horrific history of our people,” he said.