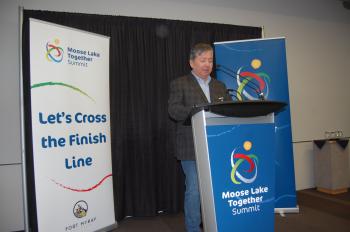 “The ultimate goal is to have the Moose Lake Plan approved so that Prosper and anybody else after that has a window, has a guideline of what (it’s) going to take to come work in that area…” — Chief Mel Grandjamb
By Shari Narine
Windspeaker.com Contributor

In four months’ time, Fort McKay First Nation Chief Mel Grandjamb expects the plan that sets the guidelines for development in the Moose Lake area to be in place.

Following the Jan. 31 meeting dubbed the Moose Lake Together Summit, hosted by the First Nation, and which included Alberta ministers Jason Dixon (environment and parks) and Rick Wilson (Indigenous relations) and representatives from the oil and gas industry area leaseholders, Grandjamb announced that a “three-month roadmap” had been put in place to finalize the Moose Lake plan. The government had asked for an additional one month to get Cabinet approval.

The three months will be spent reviewing 43 recommendations that came out of negotiations between Fort McKay First Nation and the government.

Among those recommendations is a 10-km buffer zone. Grandjamb said the community had begun with a 20-km buffer zone and have now halved that area and have agreed to development within that area.

“What it proves and shows is that our community has given me direction to allow concessions to that plan,” said Grandjamb.

He also pointed out that Fort McKay First Nation is not opposed to development, having built much of its economy through the oil and gas industry. To that end, the Nation undertook an advertising campaign to educate Alberta and Canada on the First Nation’s support for responsible development.

The buffer zone has been an ongoing point of contention. In fact, last October, Fort McKay First Nation appealed a 2018 decision by the Alberta Energy Regulator, which gave the go-ahead to the Prosper Petroleum Ltd.-owned Rigel oil sands development.

At this point, the Prosper Rigel development puts a central processing facility within that 10-kilometre buffer zone. Fort McKay First Nation was granted the appeal on the basis that AER may have erred in approving the development as negotiations on the Moose Lake area management plan had not concluded. Discussions for the management plan have been ongoing for 20 years with various provincial governments.

Grandjamb said the Moose Lake plan represents 2.5 per cent of Fort McKay First Nation traditional land and the protected area is only one per cent.

“Prosper had shown good faith by coming to the table and discussing their needs along with ours, so, they’ve addressed concerns. We’ve responded. However, we’re confident this three-month roadmap is going to iron out any of those little technical details we had to address prior to that,” he said.

Prosper Petroleum had a representative at the Moose Lake Summit.

“The ultimate goal is to have the Moose Lake Plan approved so that Prosper and anybody else after that has a window, has a guideline of what (it’s) going to take to come work in that area, and having that plan sets the roadmap for development where you have industry, government, and Fort McKay, our nation, all at the table talking and addressing our most important impacts for our community,” said Grandjamb.

The three months will progress with the Alberta government and Fort McKay having monthly meetings and weekly working sessions. Grandjamb said he has asked for senior government representatives to be involved to ensure the timeline for reviewing the plan remains on track. He says he’s also asked for Premier Jason Kenney and Nixon to meet with him on a monthly basis.

“At that four-month window I’m hoping we walk away with a plan that’s approved so that our friends, like Prosper … can get (their) project going so we can get back to the table and discuss the impacts, discuss what’s right for the community, and ensure that we can practise our treaty rights, because at the end of the day, it goes back to our treaty rights and our ability to work and survive off the land,” said Grandjamb.

“Like Fort McKay First Nation, we also want a responsible approach to development in the area. Government continues to work with the community on a path forward that respects Indigenous people’s rights while supporting critical economic opportunities for the area First Nations and the province,” said Nixon in a news release.

Neither Nixon nor Wilson were at the news conference following the summit. Kenney did not attend the summit.