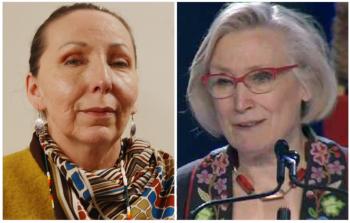 Canada is “starting to devolve a lot of services to tribal councils and trying to devolve those services to political organizations, which I think is a big mistake…” — Zagime Anishinabek Nation Chief Lynn Acoose
By Shari Narine
Windspeaker.com Contributor

“I don’t think it matters who’s in that positon.

“What I see is that Carolyn Bennett knows what self-determination should look like, but I think she’s really stymied by the fact that the government of Canada is really controlled by interest that would see our right to self-determination as a threat to their continued profitability. So I don’t think it really matters who’s in there as Cabinet minister. It’s the same agenda that’s been driven since Confederation,” said Acoose.

She also holds that same view of Dan Vandal’s appointment in the new ministry of Northern Affairs. Vandal, a Metis from the riding of Saint Boniface-Saint Vital in Manitoba, is one of five Indigenous Liberals MPs and the only one to make the inner circle.

“From where I’m coming from in terms of our work to become self-determining in Zagime, having Indigenous people in Cabinet doesn’t necessarily advance our aspirations for self-determination. They work within a system that is designed to extinguish our self-determination,” Acoose said.

“I think other interests like the extractive industries, large employers like SNC Lavalin, I think those interests—shareholder interests—always come before our interests.”

The Metis National Council (MNC), however, singled out Vandal’s appointment in its praise of Trudeau’s “good balance of new faces and experienced Cabinet members who will provide a forward-looking and stable government.”

The Saskatoon Tribal Council expressed disappointment that there was only one Indigenous member included in Cabinet.

“I am hopeful innovative and inclusive processes will be set up to hear First Nation voices across the country and implement legislation and policy that is reflective of communities and not colonial in nature,” said STC Chief Mark Arcand.

Trudeau announced his newly-expanded Cabinet, which included seven new faces and six new department iterations. He also named Chrystia Freeland as Deputy Prime Minister, a position that did not exist during Trudeau’s first term. The new role is an attempt to work with the West, which saw the Liberals shut out of Alberta and Saskatchewan. Freeland was born in Peace River, Alta.

Marc Miller, also new to Cabinet, took over the Indigenous Services portfolio from Seamus O’Regan, who was moved to Natural Resources. Miller, who previously served as parliamentary secretary in the Crown-Indigenous relations department, is the third minister for Indigenous Services since it was formed in 2017.

Bellegarde also joined the Inuit Tapiriit Kanatami and Metis Nation-Saskatchewan in welcoming the return of Bennett to her position.

"Our ongoing work with Minister Bennett will help advance our agenda given her experience and understanding of our shared priorities,” said Bellegarde.

“With Minister Bennett’s continued support of our efforts to be recognized as (an) independent government, through our MN-S core governance agreement, which has been negotiated with the federal government, great strides have been made…,” said MN-S President Glen McCallum.

Acoose says that making Northern Affairs its own department puts a “greater focus” on the north.

“The landscape of the north is changing and I think that is part of the reason why Northern Affairs is split. The resources of the north are really important to Canadian sovereignty,” she said.

However, Acoose is concerned that the new department may indicate more downloading of services.

“Strategically the split between Indigenous Services and northern development signals to me there’s going to be a pre-determined agenda and we’ve seen signals from Canada that the Indigenous Services Canada …. (is) starting to devolve a lot of services to tribal councils and trying to devolve those services to political organizations, which I think is a big mistake … because political organizations should remain advocacy organizations,” she said.

Acoose adds that “jockeying for funding” has seen advocacy groups like the Federation of Sovereign Indigenous Nations and the Assembly of First Nations delivering services.

Both the ITK and the Assembly of First Nations Quebec-Labrador (AFNQL) said they were eager to continue work that had already begun with the Trudeau government.

Natan Obed, ITK president, said work would continue with key members of Cabinet in a whole-of-government approach through the Inuit Crown Partnership Committee, which was formed in 2017 “to (bring) Inuit Nunangat into Canada as a process of nation-building.”

AFNQL Chief Ghislain Picard said it was time for Trudeau to deliver on his promises and his organization would continue to bring the pressure.

"No need to start from scratch and doing what has already been done. Now it is time to act. For a minority government, which is facing a particularly retrograde Conservative opposition on the environment and the recognition of Aboriginal rights, the challenge is considerable, and the AFNQL recognizes it," he said.