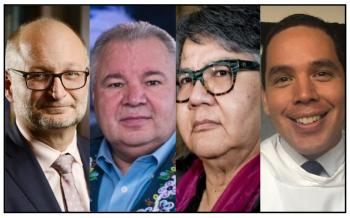 “…the special interlocutor’s mandate may evolve as discussions with Indigenous communities and leaders take place. The role will be developed collaboratively to ensure that it meets the needs of Indigenous peoples.” — Justice Minister David Lametti
By Shari Narine
Local Journalism Initiative Reporter
Windspeaker.com

“It's a long overdue step in acknowledging the devastating harm that these institutions have had and continue to have on many generations of our people and how intergenerational trauma continues today,” said Assembly of First Nations National Chief RoseAnne Archibald.

“Now is the time for accountability, action and healing. I welcome the government's commitment to funding these Indigenous-led, survivor-centric and culturally-safe efforts.”

“We recognize … that no budgetary element could have predicted a situation such as this. We recognize that there are a number of immediate and urgent growing needs for supports, especially as more confirmations of unmarked burials at former residential institutions are made across the country,” said Indigenous Services Minister Marc Miller.

Crown-Indigenous Relations Minister Carolyn Bennett committed $83 million from her department on top of the previously announced $27 million to support communities “in this extremely difficult and necessary work” of searching for unmarked burials.

She also announced that a national advisory committee would be established to provide expert advice to communities and governments on searching for and excavation of burial sites. The expertise would include archeologists, forensic scientists, pathologists and mental health experts.

Miller announced that his department would be investing $107.3 million this year to support healing from intergenerational trauma. The 24-hour residential school crisis line will also be maintained, he said.

Miller also committed $100.1 million over two years to support the work communities choose to undertake with their formal residential school buildings. That work could include demolition, rehabilitation, or construction of completely new facilities to house the activities that are currently occurring in existing former residential schools.

Heritage Minister Steven Guilbeault announced $20 million to fund a national monument in Ottawa on the unceded territory of the Algonquin to “honour (residential school) survivors and all the children who were lost and never returned to their families and communities.”

“We will continue to work with survivors and other Indigenous partners to ensure that the approach taken in developing this monument are Indigenous-led, survivor-centric and culturally sensitive,” he said.

Guilbeault’s department also committed $1.6 million over three years on top of the 2021 budget figure of $13.4 million to support initiatives to commemorate the history and ongoing legacy of residential schools, including events and activities marking the National Day for Truth and Reconciliation on Sept. 30. This will be the first year the day will be marked.

Justice Minister David Lametti announced his “intention to appoint a special interlocutor to support Indigenous peoples and communities who are working to identify and address unmarked and undocumented graves and burial sites.”

He credited Archibald, Tk’emlúps te Secwépemc Kukpi7 Rosanne Casimer, and Mary Ellen Turpel-Lafond, director of the Indian Residential School History and Dialogue Centre at the University of British Columbia, for providing the “constructive solution” of a special interlocutor.

Lametti said he took this step because Canada’s laws, at this point, did not reflect Indigenous values, traditions and practices.

“It is clear therefore that we must work differently to support First Nations, Inuit and Métis people as they grieve, and respond appropriately and respectfully to their needs,” he said.

The special interlocutor, who will be selected following discussions with Indigenous leadership and communities, will work with the Indigenous communities to recommend a new legal framework that will respect the dignity of burial sites and Indigenous children in keeping with the traditions of communities and families; evaluate federal laws, policies and practices surrounding unmarked and undocumented graves and burial sites and establish responsibilities for their protection; facilitate dialogue with provinces and territories for matters within their jurisdiction and with other relevant institutions, such as churches.

“And perhaps most critically the special interlocutor will focus on establishing a relationship between Indigenous peoples and their governance institutions and Canada that will help us move forward together in healing and in partnership. This means establishing and strengthening trust; trust that must be built from the ground up,” said Lametti.

“It's also important to note that the special interlocutor’s mandate may evolve as discussions with Indigenous communities and leaders take place. The role will be developed collaboratively to ensure that it meets the needs of Indigenous peoples,” he said.

Obed called the announcements a necessary next step in recognizing the human rights of Indigenous people and the children lost who were “Canadians in Canada when this all happened.”

He said that both the special interlocutor and the national advisory committee had “meaningful” roles to play.

Obed committed the ITK to work in partnership with the federal government and the AFN and MNC to see the announcements implemented.

Chartrand said the announcements made by the four ministers underscored the priority this issue held with the Trudeau government.

He also said the special interlocutor would play an important role in seeking justice and “address(ing) the crimes of the past.”

“But in order for it to work you’ve got to give Indigenous governments the right to make these decisions in the communities, to have their say and I look forward to these consultations, discussions and moving forward on these actions,” said Chartrand.

Today’s federal commitments were sparked by announcements made in May and June when the findings of probable burials of children were made public. In May Tk’emlúps te Secwépemc Nation announced it had located 215 unmarked graves at the former Kamloops Indian Residential School.

A few weeks later, Cowessess First Nation in Saskatchewan said it had located 751 probable burials at the Marieval Indian Residential school. The burials were identified by using ground penetrating radar in both locations. Since then, other unmarked graves of children have been located at other sites.