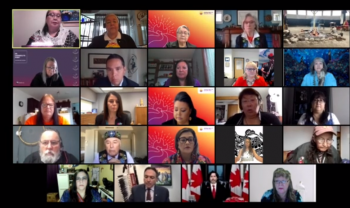 “I know I am not alone in my frustration that we have not seen swifter implementation of the Calls for Justice. This is a national tragedy, genocide, and ongoing violation of our human rights as Indigenous people.” — Louisa Housty-Jones, AFN Women’s Council
By Shari Narine
Local Journalism Initiative Reporter
Windspeaker.com

The National Action Plan to end violence and systemic racism against Indigenous women and girls and gender-diverse people comes in a variety of parts and a 12-month wait for developing an implementation plan.

According to the main document, which was virtually launched today marking the second anniversary of the final report from the National Inquiry on Missing and Murdered Indigenous Women and Girls, including 2SLGBTQQIA+, the plan is “meant to be an overarching framework” with a “comprehensive and complementary implementation plan … (to) be developed with expected outcomes, activities and timelines.”

Despite the lack of detailed action, and the bulk of the plan being a re-statement of the national inquiry’s findings, Crown-Indigenous Relations Minister Carolyn Bennett assured Indigenous women and girls and gender-diverse people that the government is “taking concrete action to end the violence.”

The National Action Plan, said Prime Minister Justin Trudeau, will lead to the “transformative change necessary to end this tragedy.”

The plan connects the work undertaken by the federally-appointed Core Working Group in collaboration with the Family and Survivors Circle, with plans by all levels of government (federal, provincial, municipal, and Indigenous), and Indigenous organizations, partners and communities. Yet some have to be developed.

As the national plan was unveiled so, too, were the complete or interim plans from the Assembly of First Nations, Congress of Aboriginal Peoples, the joint effort of the Inuit Tapiriit Kanatami and Pauktuutit Inuit Women of Canada, the 2SLGBTQQIA+ group, and the urban working group. Yet to come is the action plan from the Métis Nation, although the National Action Plan is also in response to a report by Les Femmes Michif Otipemisiwak.

The federal government outlined its commitments through its accompanying Federal Pathway document.

“Our pathway is a holistic approach to ending this national tragedy, and to implement it we will invest an additional $2.2 billion starting this year,” said Trudeau.

The $2.2 billion will be meted out over five years and is part of the $18 billion in Budget 2021 allocated to improving the lives of Indigenous peoples and advance reconciliation. There will also be $160.9 million ongoing after that.

However, the Federal Pathway offers no line costs nor specific financial commitments to any of the individual MMIWG plans developed by the Indigenous organizations.

The federal government committed to implementing a disaggregated data action plan and pledged funding “for improved collection and use of disaggregated data as part of ongoing efforts to address the overrepresentation of Indigenous Peoples and racialized groups in the justice system, and funding for academic research into systemic barriers facing diverse groups.”

The federal National Action Plan sets out long-term goals broken down into short-term priorities, but does not indicate who is responsible for carrying them out or offer timeframes by which the work is to be concluded.

Louisa Housty-Jones with the AFN Women’s Council expressed frustration with the time it has taken to develop an action plan.

“I know I am not alone in my frustration that we have not seen swifter implementation of the Calls for Justice. This is a national tragedy, genocide, and ongoing violation of our human rights as Indigenous people,” she said.

Both Inuit Tapiriit Kanatami President Natan Obed and Women of the Métis Nation President Melanie Omeniho said they remained committed to working with all levels of government.

Jeanie McLean, minister responsible for the Women's Directorate in the Yukon and representing the territories and provinces also said that her level of government was committed to working in partnership to ensure that Indigenous women and girls and gender-diverse people have “a right to live free from violence” and would also “commit to collaborating and encouraging all Canadians to be a part of (that) future.”

The National Action Plan sets as immediate next steps the creation of a “flexible and distinctions-based” implementation plan with “measurable goals and necessary resources dedicated to capacity building, sustainability and long-term solutions” to be developed over the next 12 months.

The National Action Plan has been met with criticism.

A panel of Indigenous women, including chiefs, leaders of women’s organizations and activists, immediately responded to the plan saying it failed to be proactive or offer any concrete actions.

“Canada’s failure to provide a proper plan … lies at the responsibility of federal and provincial governments. It is not the responsibility of the groups who have provided input into the current plan or those who have been advocating for all of those years,” said Pamela Palmeter, chair in Indigenous Governance at Ryerson University.

“Systemic change at all levels is necessary and the real concern, when we talk about a national action plan, (is if it) does not have a primary focus on prevention we are never going to break the cycle,” said Dr. Dawn Lavell-Harvard, president of Ontario Native Women’s Association (OWNA).