“Everyday bread and butter issues” will be addressed, says candidate for national chief 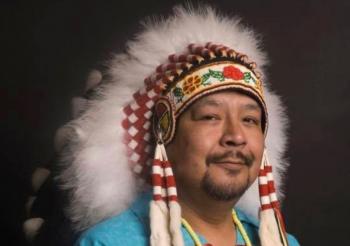 Kevin Hart is one of seven candidates running for the position of national chief of the Assembly of First Nations.

“I think I've been a great advocate and champion for women and children during the various portfolios I've been honoured to hold.” — Kevin Hart
By Shari Narine
Local Journalism Initiative Reporter
Windspeaker.com

After being approached by leadership across his region and the country to run for national chief of the Assembly of First Nations and after consulting with his wife and family, Kevin Hart decided to accept.

“I've had a wealth of people that I've worked with that I've been mentored by along the way. I've been blessed in that capacity…. It's humbling. It's been… an adventure and … here I am trying to be the next national chief. I think to myself, ‘Wow’,” said Hart.

Hart served six years as Manitoba regional chief for the AFN. In that time, he has held some of the “most critical” portfolios, including most recently serving as co-chair of the COVID-19 task force, as well as the women’s council portfolio “during the most critical times of the national inquiry (into missing and murdered Indigenous women and girls) …. I was so honoured to support those families, to pray with them, to sit with them.”

Hart believes his experience and continuity on the AFN executive far outweighs the infighting and alleged data breaches, financial concerns and bullying and harassment claims that have plagued the executive this past year.

“I know for myself and my colleagues (that) we’re all honourable people,” he said. “If there’s changes that need to be made at the executive level, like any national chief I would take my direction from the chiefs. If they say, ‘Yes, we have to make these necessary changes,’ then yes, of course, that's the direction that I get.”

Hart envisions the national chief as being “a helper to the people. They have to be the servant to the people that goes above and beyond.”

Hart said he’s aware of criticism about the disconnect between the national chief and the grassroots and pledges to “listen to everyone (because) everyone's voice is important.”

He says this is something he’s become even more aware of as regional chief because he’s overseen chiefs’ committees, as well as technical committees, and learned that technicians at the grassroots have a “wealth of knowledge and input.”

“It will be the role of the national chief to meet with all of the leadership initially to get that direction from them how they would work.” That also means going back to what the original mandate of the assembly was, as well as the precursor to the AFN, the National Indian Brotherhood. That was “to fight and protect our treaty and inherit rights and to get back to those core grassroots issues. We have a lot of everyday bread and butter issues that we have to fight for,” he said.

As for the national chief interacting with the federal government, Hart says it’s important that some “bottom line benchmarks” be established.

Hart sets as his highest priority the protection of inherent and treaty rights, inclusion and advancement.

“I believe for us, when we look at what's occurring with governments right now, our sovereignty, our treaty rights … they've been breached (and) violated each day,” he said, pointing to the violence experienced by Mi’kmaq people on the east coast in the lobster industry last year.

“We can call this economic terrorism, because that’s very much what it is…. Our people can't participate in the economies.”

His second priority would be “securing a future for our women and children.”

“When we talk about re-establishing our laws under child welfare, that sacred bond that has been broken between our grandmothers and our women, we have to go back and get that reconnection done.  We have to reconcile those broken circles because there's been cycle upon cycle of women that have been impacted, which has resulted in further trauma to the children and the nations,” said Hart.

He also draws attention to the national action plan for missing and murdered Indigenous women and girls, saying that two years after the national inquiry’s final report the federal government has done little. He says First Nations leadership and women’s advocate groups must address this glaring lack of progress.

“I think I've been a great advocate and champion for women and children during the various portfolios I've been honoured to hold. I've worked with great women leadership from across the country from coast to coast to coast in my past six years as well as my previous experience,” said Hart.

His third priority is what he calls the “everyday issues that are facing our people.” He lists housing, water, and other infrastructure and points to work that has been done in Manitoba while he was regional chief and where most boil water advisories have been done away with. He also notes the work he did as a national Indigenous advisor to Habitat for Humanity which resulted in homes being built on First Nations.

Hart believes that much of his work has resulted in dollars being included in successive federal budgets. He points to $2.5 billion announced for emergency measures, $6 billion for infrastructure and $18 billion going toward Indigenous people.

“With all the various national portfolios I held, we brought significant investments to all the First Nations across the country,” said Hart.