Election 2019: Trudeau’s need for the ‘standing ovation’ has led to disappointment, broken promises 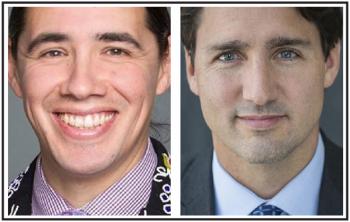 “I think when you’re trying to fix 150 years of colonization, I think there’s a lot of pent up anger, need that’s been ignored for far too long, and I think when people start responding and say, ‘We’re here; we want to work together,’ but you’re so used to having to be resistant, to have to be angry, that it’s very difficult to move into a new mode of thinking sometimes.” — Liberal incumbent candidate Robert-Falcon Ouellette
By Shari Narine
Windspeaker.com Contributor

The decision late last week by the Trudeau Liberals to force a judicial review on the Canadian Human Rights Tribunal’s ruling to compensate children wronged through the on-reserve child welfare system has been slammed by chiefs across the country.

Leaders are not buying the government’s claim that more time is needed to "address important questions and considerations such as who is to be compensated and the role of the Tribunal,” as stated by Indigenous Services Canada.

“The government could have addressed the broken system and the funding inequalities before, but they didn’t,” said Assembly of First Nations National Chief Perry Bellegarde. “To appeal this CHRT ruling, which was meant to provide a measure of justice for First Nations children in care, is hurtful and unjust.”

“After all the good words, I did not expect former Prime Minister (Justin) Trudeau to take this path. I either totally misread him or his true colours are now coming out as he is losing ground to the Conservatives,” said Littlechild.

The announcement came one day after Conservative leader Andrew Scheer led the way with the same decision. Both NPD leader Jagmeet Singh and Green Party leader Elizabeth May have said they would implement the CHRT’s ruling, which would see $40,000 paid to each child taken from their homes from Jan. 1, 2006 to a date yet to be determined by the tribunal.

“The government under Stephen Harper would have continued to appeal decision after decision and it would have gone to the court system. We said we’re going to accept (the CHRT) finding; now we’re asking what does it look like. What level of service is required… and these are important questions,” said Ouellette.

Ouellette is focused on moving forward. He says that’s what the First Nations, Inuit and Metis Children, Youth and Families legislation passed by his government is all about. It gives control of children back to Indigenous communities.

First Nations laws would supersede provincial and federal legislation, he points out. The Liberals’ 2019 election platform commits the government to providing “long-term, predictable and sufficient funding” for those services.

“I fully intend, when I get back to Ottawa with my colleagues in the Indigenous caucus, if we form government, to continue to advance child welfare legislation and to ensure Indigenous communities will be successful,” he said.

Ouellette says the Indigenous caucus plays a vital role in informing decisions made by the Trudeau government.

A new National Treaty Commissioner’s Office is a recommendation that comes from the Indigenous caucus and which has been included in the Liberal Party’s 2019 election platform. The Liberals say the office is a means to “ensure that Canada implements the spirit and intent of Treaties, agreements, and other constructive arrangements” with Indigenous peoples.

The Indigenous caucus also provided direction to the government to introduce co-developed legislation to implement the United Nations Declaration on the Rights of Indigenous Peoples, (UNDRIP), said Ouellette. That government legislation is another platform promise to be introduced by the end of 2020.

That timeline – a little over one year for consultations with Indigenous peoples – doesn’t concern Ouellette, who points out that about a year’s worth of “significant consultation” took place for the child welfare legislation and 18 months for the Indigenous languages legislation.

However, First Nations charged there was insufficient consultation done on the Recognition and Implementation of Indigenous Rights Framework legislation, and that, in part, was what brought that initiative down. And the Federal Court of Appeal ruled that the federal government failed to properly consult with First Nations over the Trans Mountain pipeline extension and forced the Liberals to do it again.

“I think you can get a lot done (in one year). I think there’s already probably a good amount of work that has already been advanced in (the UNDRIP) file,” said Ouellette.

UNDRIP implementation was promised by the Trudeau Liberals, however, it was the NDP, through a private member’s bill, that called for Canadian laws to be brought in line with the declaration. Ultimately, the Conservatives killed that bill in the Senate.

Ouellette says the Liberals moved forward on “much more concrete examples of what you can do to implement UNDRIP” by hosting more than 80 rights tables with rights holders to work towards self-government and self-determination.

Other accomplishments he lists for his government include passage of the Indigenous Languages Act; infrastructure improvements on reserves including lifting more than 80 long-term boil water advisories, building schools and community centres; reaching negotiated settlements with Sixties Scoop survivors; the implementation of Jordan’s Principle; and budgeting billions of dollars to fund Indigenous Services.

Trudeau re-organized the Indigenous Affairs department, following a recommendation made by the Royal Commission on Aboriginal Peoples in 1996.

Although embroiled in controversy, Trudeau also delivered on the commitment for a national inquiry into the issues leading to the high numbers of murdered and missing Indigenous women and girls in Canada.

What began as an accomplishment for Trudeau when he appointed Jody Wilson-Raybould as Justice minister and Attorney General—the first Indigenous person to hold that position—ended in deep disappointment and resentment when Trudeau first removed her from the role, then kicked her out of the Liberal caucus.

Wilson-Raybould claimed the falling-out occurred when she wouldn’t cave to inappropriate pressure from the Prime Minister’s Office, and others, to interfere in the criminal prosecution of industry giant SNC-Lavalin. She finished her term as an independent member of Parliament. She is working to retain her Vancouver Granville seat in this election.

“If you were to take the major policy platforms in the past four years, Indigenous people have got to be second or third,” said Niigaan Sinclair, professor in political science at the University of Manitoba. “Let’s note that this is the first time in Canadian history you have a Prime Minister who is actively engaged on issues involving Indigenous peoples.”

While the Liberals have made some “significant” changes and movement, said Sinclair, it has all been overshadowed by what wasn’t accomplished on promises made by Trudeau during his 2015 election campaign and his early days in office.

Trudeau’s inability to deliver is the result of not understanding the complexities of the Indigenous agenda, Sinclair said.

He points to Trudeau’s commitment to adopt all 94 sweeping Calls to Action made by the Truth and Reconciliation Commission, and wonders if Trudeau understood at that point he was agreeing to do away with the Indian Act.

The TRC called for the federal, provincial and territorial governments to “fully adopt and implement” UNDRIP, which is “diametrically opposed” to the Indian Act, which keeps control and domination over Indigenous peoples, Sinclair explained.

“That tells me (Trudeau) didn’t read, he didn’t think and consider the impact of making that statement on Canadian law. That’s probably the most disappointing of all. He didn’t think and over-promised. That’s not thinking long term,” said Sinclair.

“I realize that politicians aren’t in the business of being real and specific, but on the issue of Indigenous peoples you have to be, because if you’re not, what you do is you come across as naïve and confused and also neglectful.”

Conservative leader Stephen Harper, whose party the Liberals defeated in 2015, criticized Trudeau for being inexperienced and erratic, recalled Sinclair.

“When it came to Indigenous issues those are the two things (Trudeau has) displayed probably the most,” said Sinclair.

He also accuses Trudeau of being more interested in the “standing ovation than (doing) the real work.”

The irony in that is that Trudeau would still have got the standing ovation had he been realistic with his promises. Indigenous people were pushing hard for the MMIWG national inquiry and wanting conditions on First Nations, like safe drinking water and other infrastructure, addressed right away, Sinclair said.

“I think the Liberals should have been realistic in what they could have accomplished in four years. Probably if they had committed to what they actually did…I think that would have tempered expectations, it would have made things realistic and it wouldn’t have created all the confusion later,” said Sinclair.  “Instead (Trudeau) decided, ‘We’re going to fix it all in one term of government.’ That’s just disrespectful.”

Ouellette doesn’t agree with Sinclair’s assessment. He says his party understood that making changes wasn’t about “snap(ping) fingers. (Otherwise) people would have already done that.”

“At the end of the day, we have to have high expectations. Maybe we should have had no expectations and then we could have delivered on that. But I’m actually much happier having gone as far as we possibly could. We have run the speed of 100 metres for an entire marathon for four years,” said Ouellette.

Whether First Nations voters on reserve are as happy as Ouellette and will turn out in the record numbers they did in 2015 to support the Liberals, he’s not sure. He says 2015 numbers were due to a “confluence of a number of factors,” including wanting to get rid of Harper.

“My fear is that people become complacent in some way. Part of the way the Conservatives also work is they demobilize people through very negative campaigns. What this does is it turns people off politics. The issue people are going to face is what government do you want in Ottawa?” said Ouellette.

Not the Trudeau Liberals, says Tania Cameron, who spearheaded Rock the Indigenous Vote, a non-partisan movement, in 2015. Disappointed in what she sees as broken promises, Cameron has put her efforts behind the NDP, the party she ran unsuccessfully for in two federal elections in the riding of Kenora.

“Maybe in 2023 she can do a campaign called Get Rid of Andrew Scheer,” said Ouellette.

“Can anyone do a perfect job? I think when you’re trying to fix 150 years of colonization, I think there’s a lot of pent up anger, need that’s been ignored for far too long, and I think when people start responding and say, ‘We’re here; we want to work together,’ but you’re so used to having to be resistant, to have to be angry, that it’s very difficult to move into a new mode of thinking sometimes,” he said.

Sinclair says for the Indigenous voter there may not be much choice.