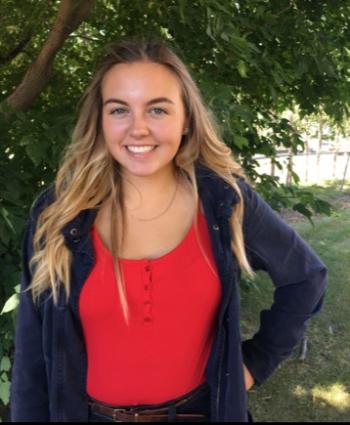 A highly-touted Indigenous female hockey player has decided that she will be continuing her post-secondary career in Canada.

Kaila Powell, a 17-year-old with roots in Norway House Cree Nation, has accepted an offer to join the University of Regina women’s hockey squad, starting with the 2019-20 season.

Powell, who plays defence, also plans to study sciences at the university.

Powell is currently a Grade 12 student at Morden Collegiate in Manitoba. And she’s also the captain of the Pembina Valley Hawks, a Midget AAA squad that competes in the Manitoba Female Midget Hockey League.

Powell had received some interest from American universities that participate in the NCAA’s Division 3 ranks. And she believes she could also have caught the eye of talent seekers in the higher calibre Division 1 level.

“I never really put myself out there to look at them and contact them,” Powell said of American schools.

“The way I see it education comes first.”

Powell believes she can get better schooling in Canada than south of the border.

“I believe it has changed over the years,” said Powell, who had an 85 per cent average in her Grade 11 studies. “Canadian schools are better.”

Powell visited a handful of universities in her home country, but following a visit this past June she decided Regina is where she wants to be.

“Regina is very close to home,” she said. “And as soon as I went there I loved everything about it. I loved the school and the program and the coaches there.”

Powell is actually from the Manitoba town of Swan River. Since her region does not have a Midget AAA girls’ team, she decided to move away from home three years ago to pursue her hockey career.

Though the club is located five hours from her home she decided to try out for the Pembina Valley squad in 2016 as it was hosting the national midget tournament, the Esso Cup, that season. Powell and her teammates placed fourth at that event, staged in the spring of 2017.

Powell has stayed with different billets each year she has been away from home.

The fact she has already been living away from her family should make for an easy transition once she enters university.

Plus, she’ll probably end up seeing even more of her family members.

“My parents will be able to come to a lot more of my games,” said Powell, who is also currently on her high school’s soccer and cross-country teams and also plans to suit up for its badminton and track and field clubs.

Powell’s parents, Tanya and Dave, usually make the five-hour, one-way trek to see their daughter play hockey every other weekend. Cutting that commute by 90 minutes each way could potentially translate into catching their daughter more often when she plays in Regina.

Besides suiting up for the Hawks this season, Powell is also hoping to crack the lineup of the Manitoba squad that will participate at the 2019 Canada Winter Games, set for Feb. 15 through March 3 in Red Deer, Alta.

Manitoba’s final roster for this tournament is expected to be chosen in December, following some exhibition matches that month and also in November. Powell is one of nine defence players vying for the six spots on the under-18 squad.

Powell is also expected to represent Manitoba at the 2019 National Aboriginal Hockey Championships (NAHC), which will be held in Whitehorse in May.

Powell has been a member of the gold-medal winning Manitoba team in each of the past two years at the NAHC.

“Kaila’s strength as a player is definitely her vision of the ice and how the play is going to develop,” said Dale Bear, who as head coach guided Manitoba to those triumphs at the 2017 and ’18 NAHC.

Though she plays defence for her club team, Bear prefers to move Powell up at the national Aboriginal tournament.

“When she plays for my NAHC team she plays forward where I can utilize all her offensive skills,” said Bear adding it is a coach’s dream to have a player like Powell on his squad as she’s also be cognizant of her defensive responsibilities.

Bear is confident Powell will star in the university ranks when she gets there. And he believes she has the potential to also play the sport at a higher level after that.

“I know Kaila's main focus is education but she is such a gifted hockey player that the next step at the (university) level will allow her to excel and learn even more which can in my opinion take her to the Canadian Women’s Hockey League (CWHL) or the National Women’s Hockey League (NWHL) once she is finished university,” he said.

The CWHL and the American-based NWHL are considered the top two women’s leagues in the world.