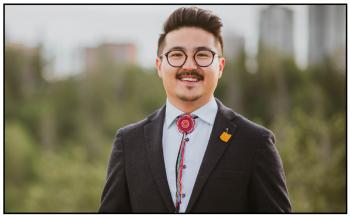 Blake Desjarlais is the newly-elected MP for the Alberta riding of Edmonton-Griesbach.

Blake Desjarlais has achieved victory, having been elected as the New Democratic Party Member of Parliament for the riding of Edmonton-Griesbach in September.

“It feels as though I've been lifted up in the ways that our ancestors speak of,” said Desjarlais, a member of the Fishing Lake Métis Settlement in northern Alberta.

He is hopeful that his election to Ottawa will have a trickle-down effect.

“The best thing we can do is show (people) that at least our House of Commons can, in fact, stand testimony to inclusion … and particularly to two-spirited people and people of colour. If our society at the highest level can accept that, then surely your local coffee shop can. Surely, the business you work at can. And surely the community church or organization you’re part of can,” he said.

Desjarlais won in a tight race against Conservative incumbent Kerry Diotte, taking 40.5 per cent of the vote (17,437) to Diotte’s 37 per cent (15,969). There were eight candidates competing in the riding.

Desjarlais said his winning strategy included pounding the pavement, knocking on doors and asking people what they needed from him. He says the ground game was even more important for the NDP who don’t have the advertising dollars that the Liberals or Conservatives do.

However, he also points out that Indigenous candidates—a record 77 ran in this election and 10 were elected—need support in developing that ground game.

“I would challenge every political party, including the New Democratic Party, to go further and continue to support Indigenous people, but to go that extra step and find ways to actually bring in community members to build capacity within their own district.

“Indigenous people don’t have that kind of capacity. We only got the right to vote in the 1960s, so we don’t have this long history or generational transition of what political organization looks like in a Westminster democracy,” he said.

He recounts one incident with five white men in a backyard adorned with an upside-down Canadian flag, a Confederate flag and a Blue Lives Matter (a pro-police countermovement to Black Lives Matter) flag. Instead of turning away, Desjarlais approached them and then listened to their racist comments, including being mistaken for Chinese and being verbally attacked for the coronavirus.

“I quit (campaigning for) that day. I stopped right there. I had to recharge. I took the day off after that. It was an evening shift … I came home and I smudged. I talked to my Elders and they said, ‘Pray for them, Blake. They’re in more pain than you think. Don’t let it get down deep into your bones on this one.’ So I didn’t. I prayed for them,” he said.

“But they are connected. For example, the federal health transfer. The only reason we have public health in Canada is because of the federal government… something the New Democrats fought for… and what Jason Kenney has done with that sacred promise to Canadians (is) he stopped so many federal benefits that could have helped our health care system,” he said.

Desjarlais was impacted personally when his uncle passed away due to the coronavirus.

“I want to make sure Indigenous families, particularly, know I understand what that feels like. I know the isolation of not being with all your loved ones who want to celebrate the remarkable lives of our people,” he said. He continues to encourage people to get vaccinated and follow health precautions.

Desjarlais was one of four MPs in Alberta – two from the NDP and two from the Liberals – to break the Conservative stronghold on the province. In the 2019 election, only NDP Heather McPherson, who was re-elected Sept. 20, held that distinction.

Desjarlais is the second Indigenous MP from Alberta. From 1988 to 1993, Chief Wilton Littlechild represented the Wetaskiwin riding as a Progressive Conservative MP.

Despite their political differences, Desjarlais said Littlechild has been a “remarkable teacher for me.” The two have met in Ottawa, where Desjarlais, who has a degree in political science, has spent time the past five years in his position as national director for the Métis Settlements.

“We stand collective and we stand firm that Indigenous issues, especially from our shared support of each other making sure they’re heard, will go a long way in making sure better policy is created,” he said.

As for his preferred portfolio assignments, Desjarlais said he can “speak well to” anti-poverty and human rights or human dignity.

Anti-poverty is a priority issue for the Edmonton-Griesbach riding, he added, with a focus on housing, including social housing and Indigenous housing; providing the necessary resources to help the homeless and less privileged; and readjusting social safety nets, such as employment insurance, to make them more effective.

“Anything we can to make sure we can reduce the poverty rate are policies I support,” he said.

Tackling the youth portfolio is something Desjarlais is willing to take on, even if it means going head-to-head with Prime Minister Justin Trudeau, who is the Liberal minister of youth.

“Actually, being a young person I know first hand the disproportionate kind of experience we’re having compared to generations in the past,” said Desjarlais, who is 27. This includes larger debt, like student loans; less home ownership; and higher unemployment rates for educated youth.

Reconciliation is also one of Desjarlais’ focuses.

The NDP picked up only one more seat over its 2019 numbers, but Desjarlais is confident the NDP will continue to play the role of “being the party of accountability” in this second consecutive Liberal minority government.

“It's easy to spread oneself out too thin and so my hope is that (the NDP caucus) can stay united on a few major goals and push them in this minority parliament with fervour and strength that is required to make sure the Liberals actually do it and, if not, we should have the strength to consider votes the other way,” he said.

This week, Desjarlais is heading to Ottawa for orientation on parliamentary procedure and his first meeting with the NDP caucus.

“I am pretty excited. I’m eager to get to work,” he said.

Trudeau has announced that parliament will sit this fall.