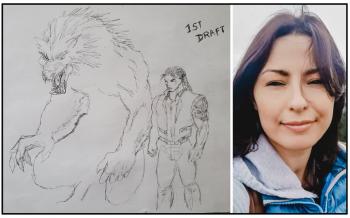 “We need to first get to the truth of the matter before we can get anywhere else. And in order to get the truth, we have to talk about it and bring it to light,” —Katłįà Catherine Lafferty
By Odette Auger
Local Journalism Initiative Reporter
Windspeaker.com

For Katłįà, Catherine Lafferty, writing is about connection to self, healing, community and culture.

Her novel Land-Water-Sky / Ndè-Tı-Yat’a was born from a real-life experience the author had at her grandmother’s birthplace, Nishi Island on Great Slave Lake.

She wrote it as a short story initially, partly based on Dene legends and stories. It grew into a novel for young adults, published by Fernwood Press in 2020, and it’s now being translated visually into a graphic novel by artist Neal Shannacappo.

Shapeshifters, folklore and spiritual experiences are woven through six characters who give the work its structure of six parts instead of chapters.

The novel covers themes of domestic violence and climate change, because these are issues her readers are impacted by, said Katłįà.

“When I was writing Ndè-Tı-Yat’a, I thought, this has to have my language in it,” said Katłįà. Her language is Wılıı̀deh Yati. Katłįà is a member of the Yellowknife Dene First Nation in the Northwest territories.

“I always want to try to incorporate my language as much as I can.”

Shannacappo is of Nakawe descent from Ditibineya-ziibiing (Rolling River First Nations) in Manitoba.

“The French called us Saulteaux,” he said. “My mom always says, `we are part of the Ojibwe nation but we are not Ojibwe.’”

Shannacappo is a graphic novelist and a poet.

“My own comic books have a mix of traditional anti-heroes and heroes, and all are Indigenous,” he said. This is the first time he will be working to turn someone else’s novel into a graphic novel.

“I think it's going to be visually stunning,” he said, especially around characters’ interactions with supernatural beasts.

Shannacappo’s looking forward to depicting the worldview of Ndè-Tı-Yat’a , when the world was young.

“I like to show off Indigenous culture, so I'm always trying to incorporate the culture into the art,” he said, bringing Indigenous themes or elements in a natural, flowing way.

“One thing I don't do about cultural stuff is I don't explain it,” said Shannacappo. He gives an example in one of his stories when a character smudges.

It’s shown, “but he doesn't give like a big, massive monologue on why he smudges, the purpose of smudging. He just does it,” Shannacappo said.

Through his work, Shannacappo highlights the importance of Indigenous languages when he chooses to not include translations.

“If a dialogue is in Anishinaabemowin, I don't translate it. I just leave it. I think the reader is intelligent enough and they have access to the internet. They can find out the translations if they want.”

“That's what I want to bring out when kids see our languages in the book. They’ll think ‘that's awesome’ and they love it, but it's not explained.”

Shannacappo pushes back against the expectation put on Indigenous makers to explain their work, when non-Indigenous books are filled with their culture with no explanation required.

She says she wrote without concrete descriptions, leaving the characters to the readers’ own imaginations.

Shannacappo was given some descriptions, but it was open ended for his own interpretation.

“I didn't put a lot of details at all into the characters and what they look like, so he can run with it,” said Katłįà. “I'm going to just trust the process and trust that he knows what he's doing. I'm excited to see what they look like.”

To Shannacappo, the writing does have strong visuals to work from. “To me, it's like reading a movie. It's just the way she does it. It has a cinematic feel.”

It’s a style Shannacappo uses for his own graphic novels, and he appreciates how “you’ve got a really strong sense of what the author is trying to get you to use your imagination.”

Katłįà says she makes an effort to write as clearly as possible.

“Writing can get very complicated very quickly,” she said. “What really takes a lot of skill is to write something that everyone can understand.”

The novel moves through time in a non-linear way. Shannacappo looks forward to figuring out how to communicate that.

Katłįà says the novel ends in an open-ended way, so she’s curious how Shannacappo will express that.

“The ending has a lot of the big players in it,” so she’s excited to see how they appear on the page together.

Exposing injustice is a strong theme in Katłįà’s life, whether it’s in her reporting—she's been a columnist since she was 16 for Northern News Services Ltd., and has written for IndigiNews, The Briarpatch and other media—or in her studies in law through the Indigenous Juris Doctor program at University of Victoria.

“We need to first get to the truth of the matter before we can get anywhere else. And in order to get the truth, we have to talk about it and bring it to light,” Katłįà said.

“And then together we can heal.”

Katłįà believes in the importance of writing from lived experience and thinks it can help in healing, for the writer and the reader.

Katłįà knows about loss and trauma. “I couldn't write about those really hard truths if I hadn't gone through them,” she said.

“I was tossed around in foster families for quite some time and almost lost in the system before my grandparents were able to take me in.

“Our family went through quite a lot of trauma by colonialism in general, being displaced from our home lands and being brought up in poverty,” she said. “For a long time, I didn't have a bed. I slept on the floor on a pile of blankets.”

“I carry that with me everywhere I go. So many Indigenous children know what that feels like and it can really break a person.”

“I wrote my life story and it was a way for me to heal,” she said.

Katłįà has been a writer since childhood. It was always there, she said, although she didn’t always recognize it. Her first published writing, Northern Wildflower, was the writing of her own story. She received feedback from others that it helped them; readers who had experiences in common.

The people of the North, Indigenous youth, especially young women, and her own children are always on her mind when she’s writing.

“I keep them in mind and how important they are, the youth of today. We have to give them a good message, an empowering message.”