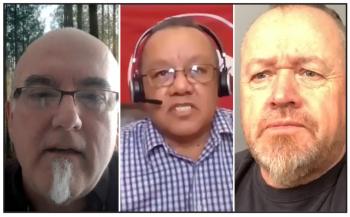 “The further that we get away from the treaties … the less value it has over time. I think we need to get back to that and force the hand of that original agreement before we go any further down the road.” — Regional Chief‒Lake Huron Scott McLeod
By Shari Narine
Local Journalism Initiative Reporter
Windspeaker.com

The United Nations Declaration on the Rights of Indigenous Peoples (UNDRIP) “is primarily a defensive piece of legislation or policy, whatever you want to call it, and we have to think about our offensive game,” said legal counsel Fred Bellefeuille during the Anishinabek Nation’s 5th Annual Lands, Resources and Economic Development forum.

“Could it include occupation of the land? Perhaps, if that’s a strategy, too. Really, we’re limited by our own imagination of how we want to pursue the offensive game,” said Bellefeuille in response to a question on the virtual forum.

“We have to articulate what we envision from it,” he said.

Bellefeuille focused on a number of articles that impacted lands and resources. He said such terms as “right to self-determination” or “traditionally owned” or “land tenure” had to be defined by First Nations and not left up to the government.

“We have to talk amongst each other like leaders and technicians to really flesh this out,” he said.

Chiefs noted that government’s interpretation of UNDRIP has been unfavourable.

“We have governments at other tables, once something comes out, whether it be this or in the courts or anything in favour of us, (government) comes back to us, ‘We interpret that paper this way,’ and then they begin. It’s just such a waste of time and resources of everyone,” said Grand Council Chief Glen Hare. “That’s always very discouraging. They just can’t live when someone tries to help us.”

“All that stuff still happens. It don’t matter if UNDRIP is around. We’ve seen even the Prime Minister bringing in the carbon tax without consultation,” said Regional Deputy Grand Council Chief‒Southeast James Marsden.

Bellefeuille stressed the importance of informed consent, which he said has “a higher threshold than simply a legal obligation…When you’re dealing with unequal bargaining power, which is definitely the case between First Nations and other governments, ethics is extremely important.”

Free, prior and informed consent is a principle protected by international human rights standards.

“These are the kind of things, I think, we have to come to understanding on and conversant with in order to avoid problems in the future,” Bellefeuille said.

Affirming UNDRIP is the subject of the federal Bill C-15. That bill, Bellefeuille pointed out, only impacts federal legislation.

Bellefeuille emphasized that UNDRIP does not contain treaty or Aboriginal rights nor is it protected by the Canadian Constitution. Bill C-15 doesn’t make UNDRIP law nor is any article in UNDRIP proposed to be federally legislated. However, UNDRIP will be “required to be considered” so that laws are consistent with it.

The strength in the federal legislation, said Bellefeuille, is that it refers to UNDRIP as a “universal international human rights instrument.”

“In Canada, human rights are taken pretty seriously,” he said.  Human rights legislation is considered quasi-constitutional, which makes it “higher than legislation but lower than the Constitution.”

That position is important, he said.

“If UNDRIP is similar to human rights legislation, one thing that always strikes me about human rights is that the window into what is a human right is evolving. It keeps changing …. So what I’m saying is that UNDRIP, even though it seems clear about certain things, that elaboration of those certain things can change over time to our benefit,” said Bellefeuille.

UNDRIP is a valuable tool right now for First Nations, he added, but it is only a tool like the education act or land management act.

“These are just tools to shape our reality and we have to maximize them … because they’re going to diminish over time to pursue our hopes and dreams for ourselves and our children,” said Bellefeuille.

“We push for UNDRIP and then we’ll be debating what that actually means for decades to come,” said McLeod.

“That’s what colonialism thrives on is that misinterpretation. Getting groups to agree then arguing about what it means, while they move on and prosper and groups like the First Nations are left trying to figure this stuff out and looking for more pieces of their legislations or declarations so that we can fight them. We keep falling in that trap and it doesn’t seem to work for us.”

McLeod said First Nations should put their energy into treaty.

“The further that we get away from the treaties … the less value it has over time. I think we need to get back to that and force the hand of that original agreement before we go any further down the road. I think it’s time we take a stand on the very basics of the treaty,” he said.