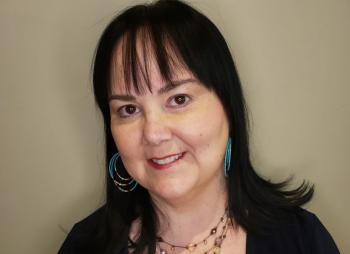 Dr. Cathy Martin is seeking to be the next national chief of the Assembly of First Nation

“I call myself a dark horse. I'm not as well known politically, but I do have political experience, I do have leadership experience, and I do have the knowledge and the strategy to be the leader for the Assembly of First Nations.” — Dr. Cathy Martin
By Shari Narine
Local Journalism Initiative Reporter
Windspeaker.com

Dr. Cathy Martin admits it was “a long decision to make” to put her name forward as one of seven candidates for the position of national chief of the Assembly of First Nations.

Martin has spent most of her life in the Listuguj First Nation, where she served three terms as an elected member for the Listuguj Mi'gmaq Government, including two terms as chief councillor. She left her community to pursue work in 2018.

“I noticed my mentality had changed, my vision had changed. I started to think of things more globally, more internationally, more holistically. I've seen a lot of difficulties in the way government structures were being run,” she said.

As a result, Martin, who holds a doctorate degree in educational leadership in curriculum instruction, wrote the book Strengthening Canadian-Indigenous Relationships and Decision-making Processes, which sets out “the structure of taking any issue or any problem and bringing it to a resolution in a step-by-step process.”

She says the role of the national chief is that of a facilitator, who takes direction from the chiefs, which is not always an easy task when differing opinions are expressed.

“You need to respect the diversity and the rights holders of each individual nation, so there has to be a mechanism in place to safeguard that the individual First Nations are not losing any of their inherent rights to their lands or resources,” said Martin.

The national chief must also build a relationship with the federal government, she said.

“To start off fighting with the government, we're not going to get anywhere. We have to start off at a baseline, and that baseline has already been established, (which is) to build upon the good attempts that are being made by the federal government and the government parties. That being said, they are good attempts. They are insufficient,” said Martin.

Leadership is something Martin would like to address, as the AFN is an “advocacy group of chiefs.” She wants that group expanded to include hereditary and traditional leadership.

“I look at it almost in terms of sweetgrass … When you braid it, when people come together, our people, it not only creates strength physically, but also spiritually.

“Both elected and traditional governments hold legal status so they hold power. Combining them will only make a united front of our First Nations and it will become much more powerful,” she said.

Martin sets tackling systemic racism as her top priority “because it’s an umbrella … (and) because it would trickle down to other priorities.”

She says systemic racism is evident not only with the federal and provincial governments through underfunded education and healthcare, and poor and unfair treatment within the justice system, but also with non-profit organizations and the service and private sectors.

“Everything, almost everything that we suffer in deficit of service delivery, falls under the systems that have been imposed upon us,” said Martin.

Nation building is her second priority. Building capacity within communities with own-source revenues means relying less on federal government funding, she says, and leads to sovereignty.

Her third priority is the wellness of a people who continue to suffer from intergenerational trauma. Healing, she says, comes from within “so we need to be part of that healing journey and healing process.”

The national chief has never been a woman and Martin, one of three women seeking the position, is adamant that her gender will have nothing to do with whether or not she is successful, regardless of studies that show women are underrepresented “in all levels of hierarchical governance or as CEOs.”

“I think that as a person, as a candidate, that's what I will be judged upon and I have the utmost respect for the 638 chiefs in this country, whether they are male or female, that they’re looking at the candidates not in terms of gender but in terms of what ideas they have put forward, how presentable they are, how much of a good communicator they are.”

“I do have respect for all the candidates… they all bring a lot to the table. I see a lot of similarities in the objectives, which is good. I think what sets me apart from the rest is that I have a strategy to move forward,” said Martin.