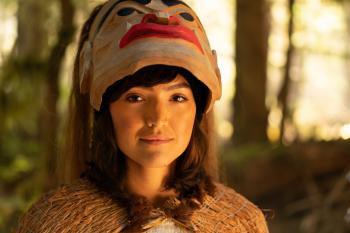 Monkey Beach is a completely Indigenous story being told by an Indigenous director. I think that’s a huge step when it comes to where I want to go with proper representation and sharing our stories with the world.” — Secwépemc actor Grace Dove
By Michael Bramadat-Willcock
Local Journalism Initiative Reporter
Windspeaker.com

The film premiered at the imagineNATIVE Film + Media Arts Festival on Wednesday, is in theatres in British Columbia and will be available across the country starting Oct. 30.

Filmed in the breathtaking landscape of Kitamaat Village in northern British Columbia, the work is based on Haisla/Heiltsuk author Eden Robinson's 2000 novel.

“I always knew, and it's the same in the book, that the land was so integral to the story,” Todd said.

“Just being there on the land and being around the place stays with you. It has its own sound, it has its own light, everything is so specific to there... The bones of the ancestors are there… There’s this deep connection that was really important for me to portray and to capture.”

Secwépemc actor Grace Dove brings life to the protagonist Lisa, who has the power to commune with the dead and save the souls of the living.

“She is bringing peace to those around her and she’s helping heal…. She has a lot of strengths so she knows that she can heal her family if she does it in a good way,” Dove said.

“I think she starts stepping into those shoes and that power throughout the film.”

In the film, Lisa moves back to her traditional territory from Vancouver and comes into her role as a medicine woman. She can speak with ghosts and can communicate with spirits.

Both Todd and Dove describe it as more a “coming to power” than a “coming of age” film.

“I think that as a young person and struggling with her identity and living in two worlds, between her traditional territory and going to the city, a lot of the troubles that she faces I connected with right away,” Dove said.

Monkey Beach covers a lot of ground, both in our own world and the next.

“This film isn’t made from a western perspective. It uses western filmmaking techniques, but it’s coming from an Indigenous place. It’s coming from how an Indigenous story is told. It doesn't tell you what’s going to happen. It sort of welcomes you in and you have to find your own way into that journey. I’d like to see more of that in our filmmaking.”

Born in Edmonton, Todd is Métis/Cree and was credited by author Robinson for inspiring characters in the original book through her film Forgotten Warriors, a story about Indigenous veterans who fought in the Second World War.

Todd said a lot of great change is going on in Indigenous film today.

“I like to think that Monkey Beach is taking us into a place where we don’t just have to be doing social realism... I think we need to be able to go into these places… into those places where our Indigenous storytelling message is what is driving the storytelling,” Todd said.

Monkey Beach is an example of Indigenous storytelling and, if audience reception is anything to go by, Todd said it shows that there’s a real thirst for that.

“People really want to see that. They want to go on a new journey… I like to think that Monkey Beach, like my other work, is bringing another way, taking those risks and being willing to take those risks,” Todd said.

“I’ll also suffer for it because some people will say that’s too slow or whatever, but what matters is when people go see it they seem to really feel a lot of healing. That’s what I’ve heard from people both Indigenous and non-Indigenous, so there seems to be lots of love for it.”

Dove is known for her role as Hugh Glass' wife in the 2015 film The Revenant.  She said her leading role in Monkey Beach feels like a breakthrough in terms of how Indigenous people are represented in narrative.

“I think leading in the movie is a huge step for me in the right direction. I’ve done movies in Hollywood on an international level, but it was never about Indigenous people. We were just kind of part of the story.

“Whereas Monkey Beach is a completely Indigenous story being told by an Indigenous director. I think that’s a huge step when it comes to where I want to go with proper representation and sharing our stories with the world,” Dove said.

Monkey Beach was one of the most watched films at VIFF and has been nominated for awards in six categories at the American Indian Film Festival in San Francisco. It is screening across the U.S. in festivals this month.

Theatre show times across Canada can be found at Cineplex.com