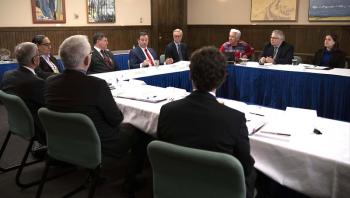 “This corporation may be a game changer in getting market access for our natural resources which is existential for our economy.” — Alberta Premier Jason Kenney
By Shari Narine
Windspeaker.com Contributor

If the three competing Indigenous consortiums come together in a single bid for partial ownership in the Trans Mountain pipeline expansion, Alberta Premier Jason Kenney says they will be “given serious consideration” for financial support through the province’s new Indigenous Opportunities Corporation.

Today, Jan. 27, Kenney and Indigenous Relations Minister Rick Wilson announced the eight-member board that will give the nod to Indigenous participation in major natural resource projects, including the federally-owned TMX.

“This is another very important step for Alberta to work to ensure that Indigenous people in this province benefit from the resources that lie below the ground that their ancestors first inhabited,” said Kenney.

The AIOC, created through Bill 14, was one of the campaign promises made by the United Conservative Party in 2017.

“We certainly will be focused on things that create low risk profile for the government, but substantial meaningful economic benefits for each of the Indigenous groups,” said Cody Church, who was announced as the chair of the AIOC board.

To that end, said Church, AIOC will initially consider currently operating projects in which “big industry” is looking for Indigenous partnership.

“I … bring a level of urgency that ultimately gets us moving quickly, gets us doing things in a fashion that can make a real difference and that in a year’s time we’re not sitting here wondering why the AIOC was established,” said Church.

Stephen Buffalo is vice-chair of the board. Buffalo, who is a member of the Samson Cree Nation, is also CEO and president of the Indian Resource Council of Canada. The IRC has officially endorsed Calgary-based Project Reconciliation in its move for a stake in TMX. Also presenting proposals for TMX are the Iron Coalition led by chiefs in the Edmonton area, and the Western Indigenous Pipeline Group based out of B.C.

Other First Nation board members are Strater Crowfoot, former chief of the Siksika First Nation and CEO and executive director of Indian Oil and Gas Canada; and Gary Boesgoed, member of the Peepeekisis First Nation, in Saskatchewan, and founding director of the Canadian Aboriginal Science and Engineering Association.

The “remarkable calibre” of the board members, said Kenney, will ensure they don’t simply write cheques for under-developed ideas, but that the projects accepted will be successful.

“This corporation may be a game changer in getting market access for our natural resources which is existential for our economy,” he said.

“The primary goal is to increase Aboriginal opportunity to own and be financial partners in big resource projects,” he said. “The more deeply vested First Nations are in the resource industry the more overall Aboriginal support there will be.”

Kenney called out the Wet’suwet’en hereditary chiefs for standing in the way of the Coastal GasLink pipeline when all elected First Nations councils in the region were in support of the development. Kenney also called out the media for focusing on the dissention and not the support for the project.

Kenney pointed out that the AIOC would fund more than pipelines and oil and gas projects and also noted that Indigenous groups outside of Alberta could apply.

Kenney said that both Prime Minister Justin Trudeau and some premiers have expressed interest in seeing how the AIOC takes off. He said in a few years, if the model has been successful, Alberta would be prepared to expand its commitment, as well as have Ottawa and other like-minded provinces come on board.

“First Nations leaders … typically realize that their primary obligation is to move their people from poverty to opportunity. We want to work with such leaders,” said Kenney.