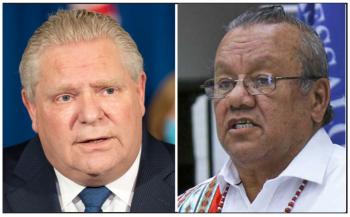 “All our bilateral meetings we’ve had with different departments in the ministries, no matter how much we talk either on water, lands, nuclear issues, we’re always behind the eighth ball.” — Regional Deputy Grand Council Chief‒Southeast James Marsden
By Shari Narine
Local Journalism Initiative Reporter
Windspeaker.com

“The government is still doing a lot of work behind the scenes without us during COVID. There are major bills being passed that affect our lives and our communities, and I just feel more so now than before COVID,” Hare said on Feb. 16 during a forum on lands, resources and economic development. “At least there was somewhat of a communication before then, but none now. Things happening too fast, so fast and we’re not part of it.”

Hare singled out Bill 156, Security from Trespass and Protecting Food Safety Act, which was enacted in June 2020.

The Act designates farmlands as “Animal Protection Zones” protecting farmlands, livestock and farm equipment from mischief related to activities that support the objectives of environmental and animal rights protest groups. It provides farm owners and operators with the ability to use “reasonable force” to conduct a citizen’s arrest on any trespassers. These Animal Protection Zones may overlap with First Nation territories where First Nation people have traditionally hunted for thousands of years.

“I will never resort, under Bill 156, if I should straddle onto somebody’s property and not knowing I am, and to be confronted by a farmer, and I have to prove who I am and show them all my identification. I will never go that low,” said Hare.

Another bill that has come under fire was the omnibus Bill 197, the COVID-19 Economic Recovery Act, 2020, which came into effect in July 2020. First Nation leaders accused Ford of hiding the amendments to the Environmental Assessment Act (EAA) in that omnibus bill. Amendments to the EAA left a wide range of decision-making to ministerial discretion.

Also of concern is proposed changes to allocating registered traplines.

“Proposed changes to the trapline succession and some of the changes, if they go through… some of our First Nations will never get a trapline. We’re outnumbered in the trapping industry right now. There’s something like 2,500 traplines in Ontario and less than 300 are occupied by First Nations. We have a lot of work to do on the trapping side of it,” said Regional Deputy Grand Council Chief‒Northern Superior Edward Wawia.

However, Regional Chief‒Lake Huron Scott McLeod went a step further calling out the Ontario government for “not having a political appetite to honour treaties” even before COVID-19 hit.

“That’s very obvious when you look at the annuities case and their desire to get into an appeal of the decisions that were made on annuities based on the Robinson-Huron Treaty. So it really shows that the appetite to recognize Indigenous rights that were protected by treaties is not there,” he said.

Almost six years ago action was brought against both Canada and Ontario for their failure to increase the annual annuities paid to Robinson-Huron Treaty beneficiaries. The annuity has remained at the 1874 rate of $4. In 2018, the court ruled in favour of the beneficiaries for increased annuities. Ontario appealed the decision. The federal government did not.  A second court decision in June 2020 upheld the finding. Ontario appealed again. Now, in part due to COVID measures, appeals won’t be heard until April and June 2021.

“All our bilateral meetings we’ve had with different departments in the ministries, no matter how much we talk either on water, lands, nuclear issues, we’re always behind the eighth ball. People say they’re going to do this, they’re going to do that. We hear the premier opening up the green space and the wetlands more and going against all our advice we’ve given over the years,” said Marsden.

But it’s not only the Ontario government’s approach to bills and advice that have chiefs concerned.

Funding is also a concern.

Marsden pointed out that on-reserve businesses did not qualify for COVID funding through the province.

Wawia said First Nations were losing out at industry management tables, because their representatives were not qualified. Capacity and training were needed, he said, to allow First Nations to be full participants at decision-making tables.

“First Nation communities are not going anywhere and we’re not going to stay silent on this. We need to figure out ways of how we can be positive, productive partners in this … and not just recipients of any financial resources. Just giving us money is not the answer either. We need to be building our capacity, being part of the entire economic structure in the province when it comes to sharing natural resources,” said McLeod.

However, he wasn’t confident that the province would deliver in resource revenue and help to build capacity in First Nations.

“I don’t see them doing this willingly. It’s going to, in my opinion, it’s going to be the next phase of court challenges that we have with the Robinson-Huron Treaty, and also the other treaties we’ll be watching of course. But I think we have to force the hand in their own legal system in order to get them to actually cooperate. And I guess ‘cooperate’ is a very loose term for something we have to force them to do,” said McLeod.