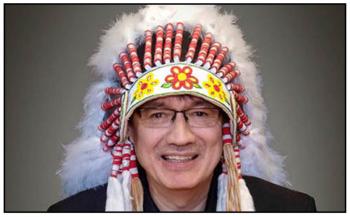 “Asserting sovereignty in practical ways is essential to develop a strong and healthy nation. We just can’t continue waiting for the other levels of government to come to the table. We need to get on with this task...” — Chief Marcel Moody
By Sam Laskaris
Local Journalism Initiative Reporter
Windspeaker.com

Chief Marcel Moody believes positive changes are being made at Nisichawayasihk Cree Nation in northern Manitoba, but also thinks there’s more to be done to bring his community up to speed—digitally speaking, specifically.

Moody, who has been involved in positions of leadership, administration and economic development for his First Nation for close to four decades, was one of the featured speakers June 2 at the National Indigenous Virtual Tech Conference.

The two-day event, which began Wednesday and concludes today, was organized by Clear Sky Connections, the largest Indigenous-owned telecommunications network in Canada.

Moody primarily spoke about life in his First Nation, which has a membership of about 5,300.

He said the COVID-19 pandemic has proven just how important digital technology is.

“This past 15 months has demonstrated how critical connectiveness is and how essential technology has become in our lives to help keep our communities functioning and our people safe,” he said. “Even though our Internet and cell service has been poor, it has proven to be a critical tool in our successful fight, at least so far, of limiting COVID-19 spread in our community.”

Moody said Nisichawayasihk officials aren’t always able to get their messages out in a timely fashion.

“Our ongoing challenge with poor technology infrastructure remains getting information about rapidly changing conditions to our citizens very quickly,” he said.

The majority of Nisichawayasihk’s members live in Nelson House, located about 75 kilometres northwest of the Manitoba city of Thompson.

Moody said the goal is to have his entire community connected to high-speed internet by this fall.

“From the pandemic we have learned how challenging the isolation is for people,” he said. “And we know the negative impacts will be with us for some time to come.”

Moody said it is not good enough to simply have all community residents online.

“We need a strategic plan that ensures we are building our digital infrastructure for the future, not simply catching up to where other communities were 10 or 20 years ago.”

Moody also said his community members must be able to put their eventual connectivity to good use.

“It is not enough to simply get the basic infrastructure installed as has been recently begun in our community,” he said. “We need to think strategically about how being connected to high-speed Internet can help train our citizens, develop new businesses that might have previously been beyond our reach because of our remote locations, and how we can provide a much better level of health and social services for our citizens.”

Without that connectivity Moody realizes his First Nation, or others in similar situations, would simply be left behind.

“Denial of access or poor access to Internet is a major barrier in the ability of a nation to actively participate in the economy,” he said.

Moody said Nisichawayasihk officials are doing their best to steer the First Nation in the right direction.

“We have taken some major steps to reclaim and reform our governance systems and build an economically diverse investment portfolio,” he said. “We are trying to build a stable economic future for our nation. While we are not there yet, this pandemic has really demonstrated how important it is to continue asserting our sovereignty.”

Moody said his First Nation began to re-assert its sovereignty in the late 1980s when it took control of its school system.

“This has not been an easy task given chronic underfunding of Indigenous education systems for decades,” he said. “But we are making progress, particularly in areas of land-based curriculum taught by our … Elders.”

The following decade the First Nation entered into negotiations to resolve most of its claims related to hydro development, furthering the Nation’s foundation to rebuild.

“By 1998 we further asserted our sovereignty by removing ourselves from the Indian Act and developing our own electoral processes which we have used successfully since that time,” Moody said.

Then in 2017 Nisichawayasihk ratified its own Constitution.

“Since that Constitution came into effect in April of 2018, we have approved and are considering more laws than we did in over 150 years of operating under the Indian Act,” Moody said. “These laws have been crucial for helping manage the challenges that have arisen during the pandemic.”

Moody believes the steps that have been taken are necessary to keep moving his community forward.

“Asserting sovereignty in practical ways is essential to develop a strong and healthy nation,” he said. “We just can’t continue waiting for the other levels of government to come to the table. We need to get on with this task and defend our actions if that becomes necessary.”

Though Nisichawayasihk is not quite where it wants to be, Moody remains positive.

“I am pragmatic enough to know that our community has not yet fully restored our sovereignty or worked out all the finer details of how we will ensure our sovereignty is protected and respected,” he said. “But I am confident we will continue to take steps to move our nation forward.”