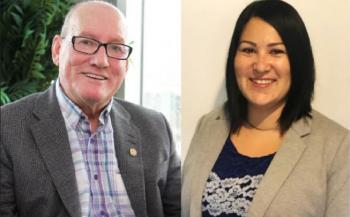 “This year’s recipients demonstrate that when we connect hard work, passion, and determination with our values, we can transform our families and our communities,” said CCAB’s JP Gladu, president & CEO.

CCAB is a national association which provides knowledge, resources and programs to both Aboriginal and non-Aboriginal owned companies that foster economic opportunities for Indigenous peoples and businesses across Canada.

Both awards are founded and sponsored by Compass Group Canada and will be presented at the 2020 Gala Awards Dinner on Jan. 28 at the Westin Harbour Castle in Toronto. The lead sponsor of the event is Bruce Power and tickets can be purchased online.

Since 2005, the Aboriginal Business Lifetime Achievement Award has been presented to a First Nations, Inuit or Métis person whose business leadership has made a substantive contribution to the economic and social well-being of Aboriginal people over a lifetime.

"I am humbled to receive the Lifetime Achievement Award from the Canadian Council for Aboriginal Business,” said Paul. “As chief of Membertou for 35 years, it has been my greatest honour to serve our community and work to create economic success for our people."

Since becoming chief of Membertou in 1984, Terrance Paul has tripled the community’s land base, increased the employment rate to 80 per cent, and increased graduation rates from 30 per cent to an astounding 90 per cent. In 2017, Chief Paul received the Order of Canada, one of the highest civilian honours in the country.

The recipient of the 2020 Young Aboriginal Entrepreneur Award is Shelley Stewart, a Syilx businesswoman from the Upper Nicola Band. She is the owner of the logging company, Bar S Ventures.

“I am pleased, honoured and humbled to be receiving the prestigious Young Entrepreneur Award,” said Stewart. “I commend CCAB for championing young Indigenous entrepreneurs and recognizing the significant contributions of Indigenous people and business. Kukukstxw (thank you).”

As a child of eight years old, Stewart told her father she would buy a logging truck when she got older and would be able to work with him every day in the forest. At age 19, she acquired her very first logging truck and became an entrepreneur. Today, revenues have grown to over $7 million annually.