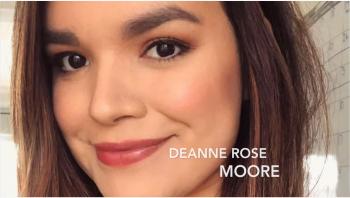 It was a little over two weeks ago when Deanne Rose Moore was contacted by the Darren Ross Agency as a follow-up to a video she’d sent in for the “Canada’s Next Top Indigenous Superstar” search.

Asked a set of follow-up questions about her musical influences, ability to travel, song writing experience, and preferred genres, Moore assumed she was selected as one of the finalists.

“But I still had my doubts,” she said about her chances.

The agency’s search was looking for a vocal artist to travel to Toronto later this summer to record a single at Jukasa Studios for radio and online streaming distribution. Jukasa has seen other artists such as Three Days Grace, The Sheepdogs and July Talk record there.

A couple of days after that initial call, Moore was told she’d won the contest.

“I started to get emotional. It took a while to kind of sink in,” Moore said on hearing the news, which she received while sitting in her living room with her husband.

“I think it was just overall shock and surprise.”

Jace Martin, the president of the agency, said he wanted to be creative in ways to recruit talent during the COVID-19 pandemic.

While some competitions have rounds of voting, Martin, who is a singer himself, said he felt it was a better fit for just a short clip to try to isolate raw talent.

“That initial audition, it’s all about your first impression,” he said. “You only get about 30 seconds to show off for the judges.”

For her audition, Moore went with the 1968 single “I’d Rather Go Blind” by Etta James, who Moore cites as one of her biggest influences. Recording her clip from her kitchen, she said she only sent in the application a day before the deadline after many people had pressured her to apply.

“It was last minute. It took me a while to consider it,” Moore said.

Moore was one of hundreds to apply, according to Martin.

The winner was officially announced on social media on June 23.

Moore’s first forays into music began at the age of four, where she said she was often heard around her house singing along to Whitney Houston. Music was very much a family affair in her childhood, as she’d learn songs from her grandmother and cousins.

First picking up the guitar at the age of 12, Moore began performing in a local church band in her hometown of Moosonee, Ont. at age 14.

“It was very self taught,” she said.

In the band, Moore expanded her instrumental reach, also playing the bass and drums in the band around local festivals and shows while also singing lead vocals.

That band involvement dissolved, however, when she moved away from home to attend Laurentian University.

Now living in Wemindji, Que. for the past four years, Moore works as a social worker for the Cree Board of Health and Social Services of James Bay.

While the solo single will be what Moore considers her first step into the music industry, she did collaborate on “Flow”, a song with James Bay Cree artists Shibastik and Bradley A.J., that was released this past weekend.

Martin suggested that his agency could create a longer relationship with Moore if all goes well.

“Once we get that first single out there, we can start building up a repertoire,” he said.

Discussions have begun between Moore and producers from the agency about what the single will look like.

“I’m submitting a bit of my original songs,” she said, with soul, R&B, and Top-40 pop music, which she figures will be a combination of styles the end product. However, she’s still working out the details of what the recording process will look like.

Long-term, Moore has big dreams for her future in the music industry.

“I want to do songwriting and music workshops for youth,” she said.

Moore admits she’s been occasionally shy in pursuing a more serious career and promoting her talent. She has posted a few YouTube videos over the past several years of both covers and original work, but wasn’t always open about it to her friends and colleagues.

“I’ve started to get more out of my shell,” she said, adding that she’s returned to performing live shows. She said winning the contest “confirms my dream to be a singer-songwriter.”

In the short-term though, Moore has got a simpler goal in mind.

“I’m just excited to jam and be part of the whole process.”