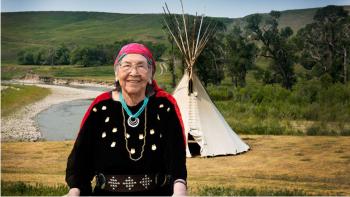 Lena Heavy Shields-Russell is one of eight recipients of the 2021 Alberta Order of Excellence.

“On one hand (Lena) was teaching the Elders English and they were teaching her the deeper Blackfoot, more of the language. There was kind of like a balance of learning, the non-Blackfoot ways (and) learning the Blackfoot ways.” — Tom Russell
By Shari Narine
Local Journalism Initiative Reporter
Windspeaker.com

Love and respect are heard clearly in the words of Tom Russell and Maria Russell when they speak about their mother Lena Heavy Shields-Russell, one of eight recipients of the 2021 Alberta Order of Excellence.

Heavy Shields-Russell, a member of the Blood Tribe, was recognized for being a “trailblazing translator… (and) safeguarding the (Blackfoot) language and culture to pass on to future generations,” reads a news release issued by the province Oct. 7.

She was among the first of her Nation to begin writing her Blackfoot language, which at the time was mostly oral. She also taught Blackfoot and general literacy skills for more than 50 years, the majority of which was spent on the Blood Reserve where she became vice-principal at St. Mary’s residential school, and also taught at Red Crow Community College. She taught junior and senior high school in Cardston, as well as at the University of Lethbridge.

“She was very honoured (to be named to the order),” said Tom, the second eldest of seven biological children.

“We’re so honoured that she’s receiving this award,” said Maria, the third oldest. “Our mother has worked very hard all her life.”

Maria calls her mother’s recognition “very timely” in light of a new awakening amongst Albertans and Canadians about the impact that Indian residential schools have had on the language, culture and mental health of Indigenous populations.

Heavy Shields-Russell started school at St. Mary’s Residential School on the Blood Reserve. She went on to attend an all-girls school in Legal in central Alberta before returning to southern Alberta and graduating from high school in Pincher Creek.

“At residential school you’re forbidden to speak your language. I remember when my great grandmother, not only her but others, would come in, her stories were all in Blackfoot,” said Maria.

“On one hand (Lena) was teaching the Elders English and they were teaching her the deeper Blackfoot, more of the language. There was kind of like a balance of learning, the non-Blackfoot ways (and) learning the Blackfoot ways,” said Tom.

While they spoke Blackfoot at home, both Tom and Maria said their mother wanted them to succeed in the contemporary world so ensured they also spoke English.

“She really promoted all of us to seek an education and we’ve all kind of fulfilled that,” said Tom.

“I used to tease her, if she wasn’t teaching she was either back in school (or) working on projects,” said Maria.

Heavy Shields-Russell has an impressive formal education, which includes the universities of Alberta (in Edmonton) and Lethbridge. She received an honorary doctorate from the University of Lethbridge in 2006.

The work Heavy Shields-Russell did with the Blackfoot language, including partnering with Alberta Education to develop a Blackfoot curriculum for grades 7 through 12, is one reason she was inducted into the order.

“I remember her. Teachers usually have their summers to themselves, but for us, Lena was always busy,” said Maria. “During those years she was really working with the curriculum, especially. She was working in her summers in her spare time and she would have her papers all over (and) … one day she told my father, ‘I wish I could just throw these papers in the wind.’ And he encouraged her … that in the future that what she was working on would be fruitful and will help a lot of people down the road.”

Heavy Shields-Russell married James Russell in 1955. They co-managed their cattle and ranch operation in the “Where Bald Eagles Nest” valley on the Blood Reserve. James Sr. passed away in 1993.

Both Tom and Maria use terms like “very hard worker” and “driven” to describe Heavy Shields-Russell. But she was also generous, positive, encouraging and respectful, they say.

And she was a perfectionist, “getting something done to the end and doing it right,” said Maria.

“Our culture, our language, our history, all of that is important in our upbringing and she brought those kinds of things out, too,” she added.

Tom said the community views Lena “with deep respect. She taught many people during her lifetime. Even today, everyone we meet, they all say, ‘How’s your mom? How’s your mom doing?’ They have so much respect for Lena, being the person who helped them along. Many people, too, she helped individually to achieve their goals.”

Heavy Shields-Russell, who recently turned 88, now resides in the Kainai Continuing Care Centre on the Blood Reserve. It was supposed to be an opportunity for her to speak her language and exchange stories with other Elders, says Maria, but restrictions brought on by the coronavirus have made that difficult.

Heavy Shields-Russell is only the eighth Indigenous person to be recognized with an Alberta Order of Excellence since the award began in 1979. There have been 197 people named to the order.

“They say that language is the one thing, the main thing, that binds a people together. That undertaking that she took on to preserve our language is leading toward preserving our culture as Blackfoot people. Her work was very vital.”