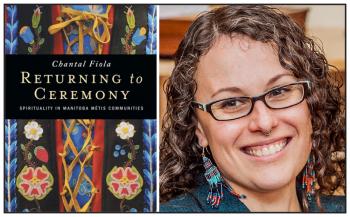 Photo is the cover of 'Returning to Ceremony: Spirituality in Manitoba Métis Communities' and of author Chantal Fiola (Photo by Madix Photography).

“It breaks my heart when I have come across Métis leaders…in our community that I have personally participated in ceremony with, but I know they’re quiet about it … (because) they don’t want other Métis to find out.” — Chantal Fiola
By Shari Narine
Local Journalism Initiative Reporter
Windspeaker.com

University of Winnipeg associate professor Chantal Fiola hopes her new book, which examines the community connection Métis have to ceremony and spirituality, will “give folks the courage to live their faith out loud.”

Returning to Ceremony: Spirituality in Manitoba Métis Communities is Fiola’s second book on the topic. Her first book, Rekindling the Sacred Fire: Métis Ancestry and Anishinaabe Spirituality, examined the individual connection Métis people in the Winnipeg area had to ceremony.

It’s a “complex question,” says Fiola, when trying to determine which comes first, the individual relationship with spirituality or the community relationship.

It’s a reconnection Fiola understands personally. She was raised as a Catholic and grew up without Métis ceremony or spirituality in her Ste. Genevieve, Man., home. It wasn’t until she went to university and had access to Elders, a sweat lodge on campus, and Indigenous programming that she had the opportunity to explore and reconnect with her Métis side.

“When you think about the devastation that has been brought upon Métis and First Nations as a result of missionary schools, day and residential schools, (and) today to have found my way back to ceremonies through higher education is certainly ironic,” said Fiola.

Fiola’s story of growing up without Métis spirituality is not unique.

“Due to the legacy of colonization, many Métis individuals and families and communities have become disconnected from our own stories, our own history. Even though the community that you’re from might have a history of ceremonies happening … today not many people in your community might be aware of that,” she said.

Much of that lack of awareness, she believes, comes from community leaders not wanting to admit that they practise ceremony or spirituality.

“It breaks my heart when I have come across Métis leaders…in our community that I have personally participated in ceremony with, but I know they’re quiet about it … (because) they don’t want other Métis to find out,” she said.

There are many reasons why Métis, leaders and others, are not vocal about their participation in ceremony.

The intergenerational impacts that come into play along with colonization are numerous. There is more than a century of Indigenous people being sent to residential schools, days schools, the 60s scoop, the millennial scoop and foster care where they were forced to disconnect from ceremony.

There’s also the impact of Sect. 35 rights, which has caused Métis to divorce themselves from any similarities they hold with First Nations when it comes to culture, language and spirituality.

“Métis people have had to fight so long for recognition from the Canadian government that we are (a wholly distinct) Indigenous people because the government did not want to recognize and honour our rights,” says Fiola in her book.

Because of all these factors, she says, divisions exist in Métis communities pitting those who practise ceremony against those who are staunch Catholics.

“I think it’s going to become increasingly difficult for Métis people to discount all of these Métis experiences of people who go to ceremonies,” she said.

One of Fiola’s surprise discoveries in her research was learning about the spirituality of Métis leader Gabriel Dumont. He was a firekeeper for a sweat lodge and a pipe carrier, made use of traditional medicines like tobacco, and smudged at Riel’s grave.

But it is the story of the sweetgrass-braided cross that Dumont always carried that stands out to Fiola as “a really cool example of syncretism, a blend of traditional Indigenous spirituality and Christianity.” She hopes as more Métis people understand this aspect of Dumont it will “soften their hearts” and result in less resistance to ceremonies and spirituality.

Ideally, Fiola says, her hope is that understanding of Métis spirituality will result in a continuum that sees Christianity on one end and Métis spirituality on the other. And in between, like Dumont’s sweetgrass-braided cross, there would be “an infinite blend of both in the centre that Métis spirituality includes ceremonies in its own right, historically and contemporarily.”

Fiola employed what she refers to as a Métis- and community-centred approach to her work. All her community researchers had pre-existing connections to their Métis communities and Fiola and the researchers allowed participants to stray from the pre-determined questions in order to fully share their stories. Participants were also allowed to review transcripts and quotes for accuracy and she “addressed any modifications they requested.” Fiola participated in ceremony throughout the project.

A third book is planned as part of the “larger research journey” and will broaden the scope of the research on ceremony and spirituality focusing specifically on the three Prairie provinces which comprise the major portion of the Métis homeland.

Fiola uses the definition of Métis that was accepted by the Métis National Council (MNC) in 2002.

Fiola, who is Red River Métis, anticipates “some implications” in dealing with other Métis people and Métis scholars in Saskatchewan and Alberta as the Manitoba Métis Federation recently pulled its membership from the MNC.

To counter that possible fall out, Fiola will be collaborating with Métis assistant professor Paul Gareau at the University of Alberta and the two will “navigate what’s currently happening in our (Métis) Nation in a sensitive and respectful way.”

An Elders Council will be created to guide the process and Elders will participate in the information and story gathering that will be carried out in at least one historical Métis community in each Prairie province.

Returning to Ceremony, Spirituality in Manitoba Métis Communities was published in October by the University of Manitoba Press. It can be purchased in local book stores or online.