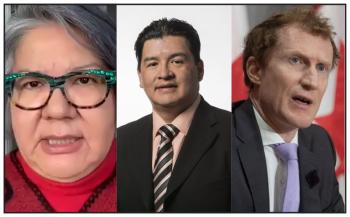 As Assembly of First Nations National Chief RoseAnne Archibald grieved with survivors when the locations of 54 possible burial sites at two former residential schools in southeastern Saskatchewan were announced, she said the federal government needed to do more.

“We need to see some kind of process. Every time we recover our children, what do we do?” asked Archibald, who joined via Zoom the Feb. 15 announcement made by the Keeseekoose First Nation.

“I’ve asked, actually, that every time we make a recovery that we lower the flags again in honour of these little ones. We need to see actions that show the recognition of the horrors that our people have gone through and continue to go through,” she said.

They were lowered upon the locating of 215 unmarked graves at the site of the former Kamloops Indian Residential School at Tk’emlúps te Secwe̓pemc in British Columbia on May 30. They were raised prior to Remembrance Day following talks with the AFN. They were lowered again on Nov. 8 to mark Indigenous Veterans Day and on Nov. 11 for Remembrance Day. Since then, the flag has flown full-mast.

Canada has committed to lowering the flag to half-mast every Sept. 30 to mark the National Day for Truth and Reconciliation.

“When we make these recoveries, that’s proof. That’s long overdue proof that genocide has occurred in Canada. And what’s really difficult about this, is that the recovery of our children is just beginning,” said Archibald.

That work was guided by project manager Ted Quewezance, who is also former chief of Keeseekoose First Nation and a residential school survivor.

The findings impact members of Keeseekoose as well as Cote and Key First Nations whose children went to those schools.

“Every announcement of residential schools, residential gravesites retraumatizes us survivors and our families and our communities. Survivors want closure and healing, but we also know we need to share our story,” said Quewezance.

Archibald also called for the federal government to go beyond its commitment to fund the search of sites.

Last August, Canada announced $83 million, on top of the 2019 budgeted figure of $27.1 million, to research and locate burial sites and to commemorate the children lost.

Archibald called for a healing fund, which would be available to both First Nations and non-Indigenous Canadians.

The Aboriginal Healing Foundation, which was created in 1998 to support Indigenous-directed healing initiatives for survivors, was extended in 2007 with money through the Indian Residential School Settlement Agreement. Funding ran out in September 2014.

“Many of our allies out there have said to me how devastated they are every time we make these recoveries, they want healing as well. They need healing as well,” said Archibald.

Canada also announced last August an additional $107.3 million for mental health, culture and emotional supports for residential school survivors, their families and those impacted by federal day schools. The funding also included the continuation of the Indian Residential School Crisis Line for Survivors and their families.

“All levels of government have to work with urgency and together with First Nations to rebuild, to recover and to heal. We need to see real action,” said Archibald.

AFN regional chief for Saskatchewan Bobby Cameron, who is also chief for the Federation of Indigenous Sovereign Nations, also called on the federal government to invest in healing work.

“If they can spend x-amount of dollars building these residential school sites, they can spend the same amount building healing and wellness centres right at those sites,” said Cameron.

Also last August, the federal government committed $100.1 million over two years for work directed by communities in regards to residential school buildings, including their demolition, rehabilitation or construction of new facilities.

He called the results of the search “devastating” and said it spoke to “Canada’s ongoing shame.”

While Miller did not address funding for healing centres or lowering the flag, he told survivors, “Canada will continue to support you on your journey.”

A spokesperson for Miller’s department speaking after the announcement at Keeseekoose First Nation did not address Windspeaker.com’s question about whether or not Miller was engaged in discussions about lowering flags after every residential school site grave finding was announced.

Instead, Justine Leblanc said in an email that further engagement with the National Centre on Truth and Reconciliation and the Survivors Circle had resulted in Canada committing to raising the NCTR Survivors Flag indefinitely at Parliament Hill.

“We are working to confirm plans in the coming month,” said Leblanc.