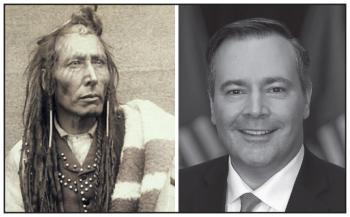 “We want to respectfully listen to First Nations. There are concerns. We want to address those in good faith and that’s exactly what the current consultations are about.” — Premier Jason Kenney on the proposal to establish a provincial police force
By Shari Narine
Local Journalism Initiative Reporter
Windspeaker.com

A memorial on the grounds of the Alberta legislature “forever to remember the victims of the Indian residential school system” has been promised by the United Conservative Party government in its Speech from the Throne delivered this afternoon by Lt. Gov. Salma Lakhani.

Premier Jason Kenney said no dollar figure had been committed to the project, but Indigenous Relations Minister Rick Wilson had attained agreements-in-principle from various ministries to contribute to the memorial.

“We want first, respectfully, to hear what Indigenous communities think we should do, what kind of memorial it should be and then we can start to scale the budget,” said Kenney. “So we … haven’t fixed a budget at this stage because we want to finish the consultations.”

Lakhani opened her remarks by recognizing the “special relationship with the Indigenous Peoples … (and) rededicating ourselves to the spirit of the treaties and to the essential work of reconciliation.”

She then recognized Queen Elizabeth II for 70 years of “selfless service” and announced the creation of 7,000 medals to be awarded to honour Albertans during the Queen’s platinum jubilee.

Lakhani quoted the Queen, who spoke during Alberta’s centennial in 2005, “Your First Nations peoples inhabited the prairies over 10,000 years ago, living in harmony with nature – then, as they do now. By the 1800s, these first citizens, along with the Métis, were joined by explorers, homesteaders and railway workers from all over the world.”

Lakhani closed by saying the minister of Indigenous Relations would be conducting consultations with Indigenous communities to establish the memorial on the grounds of the legislature.

The colonization of Indigenous people in Canada was one of the factors that led to the creation of residential schools.

The province was home to the most Indian residential schools in the country, claiming nearly one-fifth of the 134 recognized by Canada in the Indian Residential School Settlement Agreement.

Unmarked graves at former residential school sites have yet to be uncovered in Alberta although work is underway at some.

Following the discovery of these unmarked graves in the west, more than 50 Catholic and Christian churches were destroyed or damaged by arson, the majority of those in Alberta. In response, the UCP government created the Security Infrastructure program to upgrade security for vulnerable community facilities targeted by hate crimes, including mosques and synagogues. Lakhani said funding for this program will more than double.

Lakhani said the government will be recognizing the province’s past in other ways, including renaming the Terrace Building on the legislature grounds after Chief Poundmaker “to memorialize prominent Alberta historical figures.”

“That will be a wonderful tribute to one of the great chiefs who was a great voice for reconciliation and a bridge between First Nations and the pioneers of the European communities that came to this part of the world,” said Kenney.

Lakhani also noted that a bill will recognize ammolite, “the source of the sacred Buffalo Stone, or Iniskim in the Blackfoot language,” as Alberta’s official gemstone.

Consultations “on the prospect” of an Alberta provincial police force will be completed, said Lakhani.

When the concept of an Alberta provincial police force was introduced in 2020 Indigenous leaders were opposed. The report commissioned by the Alberta government that moved the process forward stated that only “limited discussion” had been held with First Nations and Métis groups.

“We want to respectfully listen to First Nations. There are concerns. We want to address those in good faith and that’s exactly what the current consultations are about,” said Kenney.

He also noted that Indigenous representation would be guaranteed on the police commission providing direct input into governance and oversight.

The speech also focused on work that will be undertaken by the government to address vulnerable populations. This includes acting on recommendations from the Human Trafficking Task Force, which “will complement” recommendations from the joint working group on missing and murdered Indigenous women and girls, and amendments to the Missing Persons Act, which will provide new tools to find victims of human trafficking.

Emphasis was also put on the government’s strategy to expand access to broadband Internet for Indigenous, rural and remote communities. That work has already gotten underway with $300 million.

Other highlights of the Throne Speech included a plan to create more jobs; diversify Alberta’s economy; and build health-care capacity.

The last Speech from the Throne was delivered in 2020.

Finance Minister Travis Toews will lay out the province’s budget on Thursday.

The legislature is to sit until the end of March.