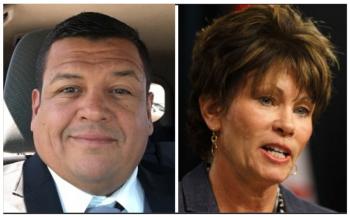 “As First Nations we are part of the solution here in Canada. It’s time that the governments work with us, know we are very smart and resilient people. We know how to create that balance that Canada is looking for.” — Frog Lake First Nation Chief Greg Desjarlais
By Shari Narine
Local Journalism Initiative Reporter
Windspeaker.com

The Alberta government is allocating $100 million in funding from the federal government in period six of the Site Rehabilitation Program (SRP) to reclaim wells in and around First Nations and Métis Settlements.

“We’re hopeful one day again we can gather medicines and we can have our children ride through these fields on their ponies,” said Frog Lake First Nation Chief Greg Desjarlais.

Desjarlais was a virtual participant in the joint announcement that was made Feb. 12 by Alberta Energy Minister Sonya Savage and Natural Resources Canada Minister Seamus O’Regan, who also joined virtually.

Savage announced that the federal government was providing another $400 million for periods five and six for well, pipeline and site closure efforts in the energy sector. One quarter of that funding will be provided to Indigenous communities for community-specific allocations. First Nations will receive $85 million and Métis Settlements will share in $15 million.

“For the First Nations, it’s bigger than the employment. We’re creating another generation of hard workers where the children can see mom and dad going to work. That’s important,” said Desjarlias, who is also a board member with the Indian Resource Council.

“This also reduces the liability that many, many oil companies swept through our First Nations and became profitable. But today is today and we’re thankful for today. Also for the Métis settlements, our brothers, we’re able to clean up these wells and return the land to its natural grass state,” he said.

The SRP was launched in May 2020 with the Alberta government directing up to $1 billion of federal oil and gas COVID-19 economic stimulus over two years.

Savage said the program served a number of purposes, including creating much needed work in the hard-hit oil field sector and restoring the land.

She said the details of this round of funding were developed with an Indigenous roundtable comprised of representatives from Indigenous communities, Indigenous businesses, and the Indian Resource Council. The program also includes Indigenous business incentives which have contributed to growing Indigenous participation in the program. There is also a dedicated liaison to answer questions from and provide support to Indigenous companies during the application process.

“We will continue to work closely with our Indigenous partners through the SRP and other energy initiatives to ensure that they, like all Albertans, are in a position to benefit from our economic recovery efforts,” said Savage.

Desjarlais said the program would allow member-owned companies and member joint ventures to provide “boots on the ground.”

One such joint venture is with Pimee Well Services, owned by six First Nations, including Frog Lake in northeastern Alberta.

“As First Nations we are part of the solution here in Canada. It’s time that the governments work with us, know we are very smart and resilient people. We know how to create that balance that Canada is looking for,” said Desjarlais.

Elizabeth Aquin, interim president and CEO of Petroleum Services Association of Canada (PSAC), also a virtual participant in the announcement, applauded both levels of government for their commitment to oil field workers and their quick action to help the struggling industry.

She also underscored PSAC’s commitment to the Indigenous community noting that the PSAC had an Indigenous representative on its board of directors and Indigenous companies among its members.

“The oil and gas industries understand the importance of economic opportunities for Indigenous people and communities as well as the restoration of lands and continues to build meaningful relationships. PSAC members look forward to continuing to work with Indigenous companies through this program and others,” said Aquin.

As of Feb. 12, $310.3 million of grant funding has been allocated to 633 Alberta-based companies for the first four periods of the program. To date, the program has employed 1,500 people, but is expected to generate 5,300 direct jobs and lead to indirect employment.

O’Regan said Alberta’s announcement was the third this week in the west that provided opportunities for Indigenous communities in the oil and gas sector using federal funding.

On Feb. 11, British Columbia announced its second round of funding for cleaning dormant oil and gas wells. With just under $100 million to be allotted, field service workers will be matched with sites nominated for cleanup by Indigenous communities, local governments and landowners.