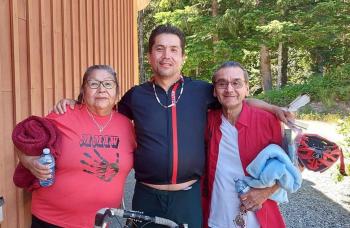 “I rode with a heavy heart and more purpose.” — Roy Jack
By Odette Auger
Windspeaker.com

Roy Jack of Ahousaht First Nation began 2,000 kilometres of cycling at the beginning of August. He’s raising funds to battle childhood cancers with the Great Cycle Challenge. He hopes to raise $10,000.

Jack completed the first 500 kilometres, riding from Port Hardy to Tofino on Vancouver Island, B.C. on Aug. 1. He will soon do a 1,200 kilometre ride from Edmonton to Vancouver.

The Great Cycle Challenge was established in 2016. Cyclers across Canada have joined the annual August challenge collectively biking 12,580,838 kilometres and raising $21,612,147 toward treatment and research.

Jack joined the challenge the year he turned 40, and this will be his fifth challenge. Over the past four years, he has biked 5,489 km, raising $6,566.

As a teenager he did a lot of cycling with his brother Reginald. It was just a good way to get around.

When he turned 40, he wanted to improve his fitness and increase activity. He turned to cycling, and downloaded an app to track his distance. After a year, he decided to use those kilometers to help raise funds with the Great Cycle Challenge.

Jack is inspired by a favourite Bob Marley quote, which goes “The people who are trying to make this world worse aren't taking a day off. How can I?” He uses the quote daily to remind himself why he’s donating all his weekends and vacation days to cycle.

This year, Jack has added other motivations to propel his rides. He’s using his passion for cycling not only to raise funds for cancer, but also to bring awareness to the issue of missing and murdered Indigenous women and girls.

He knows the fear, worrying about loved ones, and he knows the statistics.

Jack focuses his mind on this as he rides, he said, carrying the thoughts of lost family with him.

“I rode with a heavy heart and more purpose,” said Jack.

Jack said he receives messages from across Canada and even from as far south as New Mexico from people thanking him for bringing awareness to MMIWG.

“There's a lot of stories about my family members, people close to me that have been almost abducted,” said Jack.

“It brings a lot of stories to me and anytime someone tells me their story, it’s touching. Especially when they tell me that it's a part of their healing to know what I do; that someone cares.”

And he recently dedicated a training ride— 215 kilometres, with 215 stops— to honour the first of many hundreds of recovered graves of children at residential schools. He stopped 215 times to commemorate the 215 unmarked graves located at the former Kamloops residential school to hang orange t-shirts, one for each child. His last stop was at the site of the former residential school in Port Alberni. Hundreds of people greeted him at the finish line.

“The last two years, my mom and dad Faith and Norm Jacob have come with me on every major ride. And they just follow me, to just make sure that I'm safe on my ride.”

Supporters have fundraised to help him afford back-up bike parts and for other expenses.

Jack said his cycling has been part of his strategy to deal with his own mental health concerns.

“I did struggle with abuse from certain people in my life. And there was always the feeling of not being accepted, and (being) lonely.”

Profound depression set in and that led to drug and alcohol misuse at a young age.

Suicidal ideas surfaced on more than one occasion, but he thought about how his loved ones would feel if he took his own life and that stopped him.

Jack explored self help books, counselling and treatment centres. He remembers one book in particular by Louise L. Hay titled You Can Heal Your Life that influenced his outlook.

“What we think about ourselves becomes the truth for us,” writes Hay. “I believe that everyone, myself included, is responsible for everything in our lives, the best and the worst. Every thought we think is creating our future. Each one of us creates our experiences by our thoughts and our feelings. The thoughts we think and the words we speak create our experiences.”

It was with his wife Allana Titian that Jack found a better path, and together they made choices towards living a healthy lifestyle. Jack looks forward to, one day, becoming a speaker on youth empowerment and mental wellness.

With 13 years of sobriety and a strong commitment to issues that impact Indigenous peoples, Jack is moving toward his goals one kilometre at a time.