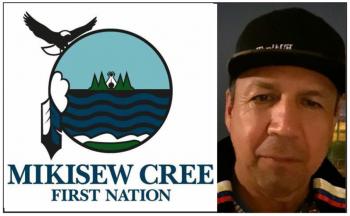 “People want to consider mail-in ballots. It saves a lot of travel and you get a truer picture of an outcome of your vote.” — New Mikisew Cree First Nation Chief Peter Powder
By Shari Narine
Local Journalism Initiative Reporter
Windspeaker.com

Five votes have propelled Peter Powder to the position of chief of the Mikisew Cree First Nation.

The election appeal committee made its ruling in Powder’s favour in a Sept. 4 decision, one day after three appeal hearings took place based on the outcome of the Aug. 27 election for chief and council.

Powder’s election victory was appealed by Sally Whiteknife, one of three people running for the position of chief. Whiteknife’s name was incorrectly recorded as Whitehead on advanced polling ballots. By the time her name was corrected, 27 people had already voted for chief.

Powder argued that his election victory margin was 32 votes and even with the 27 advanced ballots not counted, he still won.

Two other appeals were not upheld, so the Aug. 27 results remained valid.

Councillors-elect Russell Kaskamin and Roxanne Marcel had their candidacies challenged by Doris Tourangeau, who alleged ongoing litigation from a 2003 Canadian Human Rights complaint of sexual harassment she made against Kaskamin. Tourangeau included Marcel in her appeal because Marcel served as chief in 2003.

The appeal committee questioned the relevance of Tourangeau’s grounds for appeal, as well as the evidence presented, stating “the case is from many years ago and appears to be closed and/or not pursued.”

The appeal committee dismissed the claim noting Sect. 6 of the custom election regulations, which states someone is ineligible to run for a position if they have been convicted under the Criminal Code within five years of the election.

Waquan alleged other irregularities, including that councillors-elect Kaskamin and Sherri McKenzie owed money to the band and that people were “improperly present at the polling stations.” These grounds for appeal were dismissed by the appeal committee.

While none of the appeals resulted in changes to the election results, that did not stop the appeal committee from “express(ing) strong concern” that the MCFN customary election regulations be reviewed and amended before the next election. The committee also recommended that other options than appointing a chief electoral officer be considered.

“(This) should be a high priority for the incoming chief and council and should be addressed sooner than later for the benefit of the Nation and its membership,” wrote the committee in its decision.

“I have five priorities that I selected this morning (Sept. 8) when I decided to come in (to the office) and that was at the top of the list,” said Powder.

Changes in the custom election regulations are not only needed to address this series of appeals, he says, but everything that led up to the election.

On April 22, the council-of-the-time passed a BCR postponing the June 20 election until the end of September. It cited the coronavirus pandemic as the reason.

Legal action was undertaken by MCFN members Roy Vermillion and David Tuccaro challenging the postponement. Then on July 7, a Notice of Election was posted for members to go to the polls on Aug. 27.

Powder favours amending the custom election code so council-of-the-day would have less say over changes.

“We want it more clear, more concrete,” he said.

He notes that the election process could be changed to have a law firm carry out the duties a chief elector officer is charged with.

“People want to consider mail-in ballots. It saves a lot of travel and you get a truer picture of an outcome of your vote,” said Powder.

Powder says Elders and community members will be consulted on the new custom election code and is uncertain as to how long the process will take.