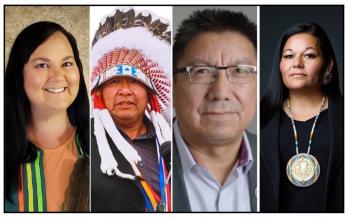 “I know many of our chiefs have already expressed the AFN doesn't necessarily need to be at every table. The job of the Assembly of First Nations is to facilitate those processes and then get out of the way.” — Alvin Fiddler
By Shari Narine
Local Journalism Initiative Reporter
Windspeaker.com

A common pledge by candidates running for the position of national chief of the Assembly of First Nations in any election year is to revisit the structure and operation of the national organization.

This year’s election, slated for July 7, has garnered the same commitment from all seven candidates.

RoseAnne Archbald, Reginald Bellerose, Lee Crowchild, Alvin Fiddler, Kevin Hart, Cathy Martin, and Jodi Calahoo Stonehouse are each adamant the AFN is not a rights holder but an advocacy body.

“Lately, the AFN has been kind of diverting more towards a different level of government. They’re delving into legislation and … when you start doing that, you're risking a lot of things,” said Martin.

“The biggest mistake both the provincial and federal governments make, they're trying to paint us all with the same brush, and delving into legislation kind of caters to that. We are all individual nations with individual needs, quite diverse across this country,” said Martin, an elected member for the Listuguj Mi'gmaq Government.

The year after Perry Bellegarde became national chief in 2014, the Liberals won the federal election and Cabinet ministers became regular attendees at the AFN’s annual general assemblies. However, ministers spent more time addressing chiefs and less time answering their questions from the floor. This became an issue with chiefs. They directed Bellegarde that things needed to change, said Bellerose, former chief of the Muskowekwan First Nation, Sask.

“I would like to encourage the Cabinet ministers and government to come and sit and listen to the chiefs… Not just talk at them. Listen to what the chiefs are saying, and if you take a whole day I’m pretty sure you’d learn a heck of a lot from the chiefs.”

Opening doors to allow leaders “direct dialogue” with federal officials and supporting the work undertaken by First Nations is a role the AFN should play, says Fiddler, who serves as grand chief for Nishnawbe Aski Nation.

“I know many of our chiefs have already expressed the AFN doesn't necessarily need to be at every table. The job of the Assembly of First Nations is to facilitate those processes and then get out of the way,” he said.

“I would say that there is a centralized way that the AFN does act right now and that authority—I wouldn't call it power—that that authority has to be really directed by the regions,” said Archibald, who as former Ontario regional chief has sat at AFN’s executive table for the past three years.

“We definitely need to get back to what the original intent of the Assembly of First Nations was and that was, of course, protecting treaty and inherent rights and advocating for such,” said Kevin Hart, former Manitoba regional chief, who has been at the AFN executive table since 2015.

The last amendments to the charter occurred in December 2020. They, like the amendments that occurred in 2019, were mostly housekeeping, such as changing the name of the Elder Council to the Knowledge Keepers Council and adding a Veterans Council.

Perhaps the more substantial procedural amendments came in 2019, which required the national chief and the regional chiefs to take an oath of office and establishing that no motion passed by a chiefs’ committee would bind the executive committee or the First Nations-in-Assembly.

In December 2019, the plan was to bring more substantial work on charter renewal forward to the chiefs at the July 2020 annual general assembly. However, that AGA was cancelled due to the coronavirus pandemic. The December 2020 AGA went virtual also because of COVID-19.

One big ticket item that the chiefs’ committee for charter renewal was supposed to raise was on proportional representation.

“There are a lot of chiefs, especially in southern Alberta, that want proportional representation. That's a pretty big thing,” said Crowchild.

He points to the Kainai Nation, which has about 13,000 members, but only gets one vote at the AFN, as do the British Columbia Nations that may only have 35 people.

“We will talk about proportional representation. Maybe that model doesn't work either, because you don't want to dismiss B.C.  There's a lot of votes there,” said Crowchild.

BC has 198 distinct First Nations.

Martin says she would like to extend a place in the AFN to traditional and hereditary chiefs. Right now only elected chiefs are part of the AFN.

“From time immemorial we had our own leadership systems and it still exists today parallel to the elected leadership. It wasn't until the implementation of the Indian Act that this divide had arisen,” she said.

Archibald wants to see two arms created within the AFN: one would be a strong administrative board and the other a national leadership council, which would be the political body “that does that outreach to regions (and) it brings all those issues forward to the national level to see where we can work together.”

“The Assembly of First Nations is about individual First Nations coming together and local leadership is the foundation of the organization and … the rights holders who elect the chiefs and council are actually the most important people in the whole political system. But the problem is there's just a big disconnect between rights holders and the national chief,” she said.

Other substantial issues to be examined for the charter are defining the term “First Nations” and the role of the Confederacy of Nations, which is mandated, in part, with ensuring the implementation of decisions made in between assemblies.

Fiddler says changes should also be about making the AFN “more inclusive for everyone.”

That work began last December when intense discussion among chiefs resulted in the passing of a resolution that established “an independent, fair, and impartial investigative review … to end sexual orientation and gender-based discrimination and all other forms of violence, including sexualized violence, lateral-violence, bullying and cyber-bullying” in the AFN.

“We're at a pivotal time where we can start to refocus, reform and re-imagine our governance with decentralized authority in a way that really lifts our sovereignty and gives the power back to our First Nations,” said Stonehouse, a councillor with the Michel First Nation in Alberta.

“I think we can do better. I think there's room for improvement and we have to make sure we're not taking partisan positions, and that we are empowering our chiefs,” she said.

“The chiefs in assembly make that decision and we build a system that's going to make our chiefs the most successful,” said Stonehouse.