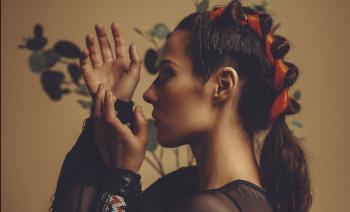 ANYMA’s new single If God Had A Boat was released today, June 18.

“What I'm realizing right now is that love is always stronger than any fears that we have… and that the courage that we must dig deep to find in ourselves is worth it.” — ANYMA
By David Owen Rama
Local Journalism Initiative Reporter
Windspeaker.com

During those times when it feels like we’re sinking within a dark sea of crippling grief, all of us, one way or another, seek out something we can cling too in the desperate attempt to keep our heads above the turbulent emotional waters that threaten to pull us under.

For Wyandot singer/songwriter ANYMA, music and nature have always been her life-preservers.

Born and raised in Wendake, Que., her mother a dancer/choreographer and her father a musician, producer, and cultural chief of their community, ANYMA was encouraged to explore her creativity from a very young age.

“I have pictures of me, when I was like three years old and I already had like a fake microphone in my face,” ANYMA said.

“My father was a producer and he had a show and he was a musician. So it was kind of easy for me to just slip into his own passion to discover myself in this art.”

Her father’s “show” was called Ozalik, a multi-disciplined piece of musical theatre presenting a modern interpretation of the mythology of the Huron-Wendat Nation. Incorporating live music, dance, theatre, and circus performance, Ozalik ran for several years in Quebec and ANYMA would eventually become one of the dancers in a cast of 20 performers.

Her father was also responsible for nurturing his daughter’s profound connection to the natural world, and as an adult ANYMA admits that she has special places she retreats to near her home where she goes to ground herself and meditate.

When ANYMA was young her father would turn to the natural world to teach his daughter valuable life lessons.

“He would bring me to this big tree in the woods and he would say, this is the chief and you apologize,” she recalled.

“Being really young, my father taught me that the trees were bigger than us and that they were the teachers, right? So, in a way, thinking like this made me respect the planet Earth so much, and that these trees are greater than us, and that they possess this spiritual energy to help us heal.”

In 2018 ANYMA’s father passed away, and it was this loss, in addition to other painful experiences, that pushed the artist to seek refuge both in nature and through her music.

ANYMA radiates an energy that is both brave and honest as she explains how dark things got for her after her father’s passing.

“I was going through a lot of anxiety and depression when my father died and I was overwhelmed by my emotions. I did not want to stay on Earth, and I wanted to leave.”

ANYMA turned to songwriting to save herself and heal her pain. The compositions that bloomed from this healing process form the contents of her debut EP Humans, which will be released later this summer.

Coming out ahead of the Humans EP is the first single called “If God Had A Boat”. Making its debut on June 18, the song is a gorgeous soundscape layered with percussion, guitars and natural sounds swirling within thick surging waves of electronic pulsations, a stunning backdrop showcasing ANYMA’s heartfelt poetry and her unique and ethereal voice.

When asked if writing the song helped to bring her back to the world ANYMA is quick to confirm how beneficial the songwriting process was for her state of mind.

“Just releasing the words and letting it all out made such a huge difference,” said ANYMA. “To be honest with myself, through music and through the melody just helped me release the emotions and I cried over writing the song.”

ANYMA is excited to be releasing new material after her debut 2020 single “Circus” brought the musician some unexpected good fortune, a chance to work and perform with an actual circus.

Impressed by her background as a dancer and performer in her father’s production of Ozalik, her gorgeous voice, and her songwriting skills, ANYMA was approached to join the Quebec circus troop Flip Fabrique as the company’s designated singer and composer.

It’s a great opportunity for the musician, which will see her performing with the troop beginning in January 2022. Remaining open to the opportunities that may arise once Humans is released, ANYMA is thrilled to be showcasing her voice and her compositions through the Flip Fabrique experience.

“It's kind of like putting a bit of who I am into (Flip Fabrique’s) vision, so it's really interesting, and it helps me to evolve my own art, I think.”

By pushing through the emotional pain and allowing herself to process the seemingly overwhelming grief through her musical process, ANYMA found that she was able pull herself up from the crippling depths of despair and manifest a resurgence of beauty and new opportunities back into her life.

To stream or download ANYMA’s new single and view the powerful new video for If God Had A Boat, you can visit her website at ANYMA | Official Website (anymamusic.com).