Young players held up as examples of good sportsmanship 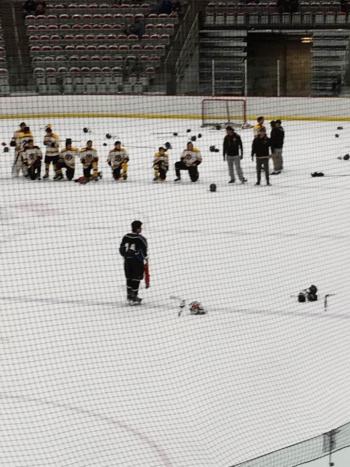 Young sportsman Tayson Desjarlais stays on the ice for the medal ceremony, despite coach's ordes. Photo by Olivia Daniels

“Some of the boys said they wanted to stay on the ice but they were told to get off. That’s a prime example of being a follower.” ~ Vern Desjarlais

A powerful photo from an Indigenous youth hockey tournament has been shared around on social media the past few days.

The photo shows one teenage male hockey player lined up on his blueline for a post-game medal ceremony. At the other end of the rink are all the members of the championship squad that had just won the game.

The photo was taken following the Bantam boys’ championship match at the Alberta Treaty Hockey Championships, which concluded on Sunday in Calgary.

The Tsuu T’ina Chiefs edged the Frog Lake Thunder 3-2 in the final.

According to many accounts, after the game, the second place team’s head coach huddled the players together and instructed them to leave the ice and skip the medal presentations.

“But I’m not sure why he did that. I can’t answer for him or speak for him.”

The boy pictured in the photo is Desjarlais’ son Tayson. What the photo doesn’t show is that Vern Desjarlais and his nephew, goaltender Michael Marty Jr., also stayed on the ice in a show of sportsmanship to the winning team and to receive medals for Thunder.

Desjarlais said the head coach would have known an on-ice medal ceremony would be staged.

“That’s not his first rodeo,” Desjarlais said. “He knows the procedure.”

Members of Thunder were obviously hoping to win the tournament, especially since they had beaten the Chiefs a day earlier by a 3-2 count.

After the medal presentation Desjarlais said he returned to the dressing room with the two players who had remained on the ice. They found the head coach giving his players a tongue-lashing for their performance in the final.

Desjarlais said the head coach asked him if he had anything to add. Desjarlais did address the club and expressed his disappointment for all those who didn’t remain on the ice, adding he had never witnessed anything like that throughout his coaching career.

Desjarlais said the head coach did not make any further comments afterwards.

“He understands he was wrong,” Desjarlais said. “He was upset. He had nothing to say after that.”

Head Coach Joe Dion was unavailable for comment prior to Windspeaker’s press deadline.

Other than the fact Thunder lost the final, Desjarlais said he’s not quite sure why the head coach was so upset. He doubted it was because of the officiating in the contest.

Desjarlais said some of the team’s members told him they were simply following their head coach’s instructions and that is why they skipped the medal presentation.

“Some of the boys said they wanted to stay on the ice but they were told to get off,” he said. “That’s a prime example of being a follower.”

Desjarlais praised his son and nephew for sticking around.

“Do not follow if you know it’s wrong,” he said.

What made the players’ actions even more inspirational was the fact that Marty Jr.’s father had died less than two weeks ago.

Desjarlais said he had previously coached with Dion two years ago, at the same tournament at the Peewee level.

Though disappointed with how Dion acted, Desjarlais said he would not rule out coaching with him again in the future if the opportunity did arise.

As for Tayson, Desjarlais said he has read numerous comments online praising him for sticking around for the medal ceremony.

“It makes me feel good about myself with what people are saying,” he said.

The younger Desjarlais said he has been playing hockey for about nine years and has never been involved with another incident such as this.

He said he tried to convince another teammate to also remain on the ice. He said he grabbed that teammate’s arm but the player skated off.

Tayson Desjarlais said he didn’t take the loss in the championship game that hard. In fact, he was content with his medal.

“We walked away with something,” he said. “Silver is nice. It’s something.”

Though he has been playing hockey for close to a decade, the younger Desjarlais said he was rather excited about receiving his medal. He believes it is only the third medal he has ever won.

And the Grade 9 student has no regrets about his actions. If the situation ever arises again where a coach asks his team to leave the ice prior to a medal ceremony, he knows what he’ll do.