World champion wrestler has Olympics in her sights 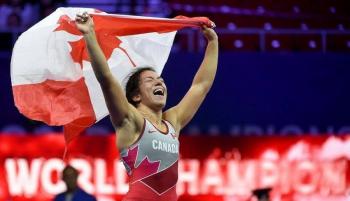 “Once the whistle blew and we were actually wrestling, I had so much fun and just tried to let my body do what I’ve trained to do and listen to my coach.” — Justina Di Stasio
By Sam Laskaris

Though she is a recently crowned world champion, Justina Di Stasio has already set future goals.

The 25-year-old wrestler, a member of Manitoba’s Norway House Cree Nation, is now setting her sights on capturing future world titles and also on becoming an Olympian, as early as 2020.

Di Stasio won the gold medal in the women’s 72-kilogram category at the world wrestling championships, which concluded Oct. 24 in Budapest, Hungary.

For Di Stasio, who lives in Vancouver, this marked her first gold medal at the world championships. She had earned a bronze medal in her 75-kilogram category at the 2017 world meet.

“This world title is something I have been working towards for a very long time, and is very high up there for my personal accomplishments,” Di Stasio said. “It’s an incredible feeling and so motivating because I want this to happen again.”

Di Stasio’s wrestling resume also includes gold medals at the 2015 and 2017 Pan American Championships and a silver medal from the 2015 Pan American Games.

Di Stasio travelled to Budapest with the sole goal of returning with a gold medal.

“I went there to win,” she said. “I trained harder than before, which I think is crucial to feeling confident at the world level. I listened to my coaches and my training partners and they pushed me at practice to be prepared for whatever would happen at the tournament.”

Though she is the one who performed well on the mat, Di Stasio said others also deserve praise for her world championship.

“It was such a hard summer and I couldn’t have prepared and had the expectations I did for myself without my support system,” she said. “That’s why I was able to set and achieve this goal.”

Di Stasio had four matches over two days at the world meet. She defeated Mongolia’s Nasanburmaa Ochirbat 4-2 in the gold-medal battle.

Di Stasio, whose mother Fiona is Cree, said all of her contests were tough ones.

“They were all uniquely challenging because the nerves are at a high each time you walk out there,” said Di Stasio, whose father Tony is Italian. “During the final was when it was hardest to control my excitement because I had never been in a senior world final before.”

Di Stasio, who had three of her matches the day before the final, tried to get some rest before the gold-medal contest.

“I tried to nap during the day and every time I closed my eyes I could only see wrestling,” she said. “Once the whistle blew and we were actually wrestling, I had so much fun and just tried to let my body do what I’ve trained to do and listen to my coach. And I am so glad with how it all worked out.”

Di Stasio is also hoping things work out for her and that she will get to represent Canada at the 2020 Summer Olympics in Tokyo.

Results from Canadian championships and national Olympic trials in 2019 will help determine which wrestlers advance to Tokyo, provided the country has also secured spots for its athletes through other qualifying procedures.

Di Stasio is confident she has what it takes to become an Olympian.

“I love my chances,” she said. “Looking back at the training I did leading up to worlds, I see improvements as well as things I need to continue to improve. I have just over a year to keep getting better. So I think that process oriented outlook helps to keep me calm and give me my best chance to make the Olympic team for 2020.”

Besides continuing to wrestle herself, Di Stasio is also gearing up for her second year of serving as an assistant coach with the women’s wrestling team at British Columbia’s Simon Fraser University, her alma mater.

“It’s been one of the best choices I’ve ever made,” Di Stasio said of her decision to accept the coaching gig. “I am learning so much about this sport and the girls on the team are so inspiring and fun to work with.”

Di Stasio added she is getting a different perspective on the sport through coaching.

“It is amazing to see them succeed, learn and grow as athletes and as women,” she said. “To be a part of someone else’s wrestling journey is something I feel so privileged to do because through the wins and losses you see vulnerability. And then you see them grow and learn how to handle things. I love watching that happen.”