What are they doing now? Updates on Larocque, Alexis, Shattler, Dewar and Boudrias 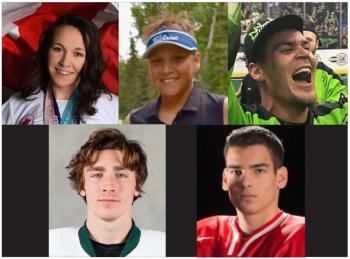 Sports newsmakers are continuing to shine in their athletic pursuits and are hoping to make headlines this year.
By Sam Laskaris
Windspeaker.com Contributor

Indigenous athletes made their share of headlines in 2018 for their local, provincial, national and, for some, international efforts.

Many of those newsmakers who were featured in Windspeaker.com stories during the past year are not resting on their laurels now. In fact, they are continuing to shine in their athletic pursuits and are hoping to make headlines this year.

An update on all of these stellar Indigenous athletes follows:

The past year was certainly a memorable one for Larocque, who lives in Brantford, Ont. Larocque, who is Metis, was a member of the Canadian women’s hockey squad that captured the silver medal at the Pyeongchang Olympics.

For Larocque this was her second Olympic experience. She made history in 2014, becoming the first female Indigenous hockey player to compete at the Olympics, helping Canada win the gold medal at the Sochi Games in Russia.

She also helped the Markham Thunder win the Canadian Women’s Hockey League championship this past March. And in the fall she was named as the recipient of a Tom Longboat Award for being the country’s top female Indigenous athlete.

Besides continuing to play for the Thunder this season, Larocque is hoping to represent Canada in an upcoming three-game series against the United States, as well at the 2019 world women’s hockey tournament this April in Finland.

Larocque also continues to be a part owner of Stoke Strength and Conditioning, which runs hockey camps, on-ice development for associations, as well as small group and private sessions.

Alexis, a member of the Alexis Nakota Sioux Nation, was profiled in Windspeaker.com this past July after taking top honors in the Mid Amateur category at the Alberta women’s amateur golf championships.

The Mid Amateur division was restricted to those 25 and over. Alexis was 29 when she won the tournament.

Since then Alexis, a once promising junior star, has moved to Florida to concentrate on her golf career. She’s hoping to eventually become a regular on the top women’s circuit, the Ladies Professional Golf Association (LPGA) Tour.

Alexis moved to Florida this past October. She’s currently living in Jacksonville and is a member of the Windsor Parke Golf Club.

While honing her skills in the sunny south, Alexis has been participating in various National Women’s Golf Association tour events.

Starting in March she’ll also enter tournaments on the Women’s All Pro Tour.

Shattler was featured in Windspeaker.com this past June after he was named the most valuable player in the National Lacrosse League’s playoffs.

Shattler, a member of the Wiikwemkoong Unceded Territory on Manitoulin Island in Ontario, helped the Saskatchewan Rush win the 2018 NLL title. And he was selected as the league’s playoff MVP after netting 15 points (eight goals and seven assists) in four post-season games.

For Shattler, who is now 34, the 2018 campaign was his first in a Rush jersey. He had spent the previous 11 seasons with the Calgary Roughnecks, winning an NLL championship in 2009.

As for this season, Shattler is not showing any signs of slowing down. He is still considered one of the NLL’s top offensive talents.

In the first two Rush contests this season he’s earned six goals and two assists. This includes Shattler’s performance of four goals and one assist in the Rush 16-12 victory over the expansion San Diego Seals this past Saturday.

Dewar, a 19-year-old forward from The Pas, Man., is continuing to showcase his skills in the Western Hockey League.

Dewar is one of two Indigenous players selected by the Minnesota Wild in the 2018 National Hockey League’s Entry Draft this past June. He was chosen in the third round, the 92nd pick over-all.

The Wild drafted Dewar after he averaged a point per game – 68 points including 38 goals in 68 games – last season with the Washington-based Everett Silvertips.

As for this season, Dewar, who is now the Silvertips’ captain, he has taken his game up a notch. He is one of the WHL’s top 10 scorers as he has racked up 55 points (29 goals and 26 assists) in his first 38 matches.

Dewar also suited up for Team WHL in a recent two-game series league stars had against a visiting Russian squad. He had two assists in those contests.

Boudrias, who is Algonquin, was the other Indigenous player chosen by Minnesota in last June’s NHL draft.

He was the Wild’s sixth-round pick, 179th overall.

The Minnesota franchise drafted him after he averaged a point per game during the 2017-18 campaign with the Quebec Major Junior Hockey League’s Gatineau Olympics.

Boudrias was credited with 60 points (28 goals and 32 assists) in 60 regular reason outings.

Boudrias also started the 2018-19 campaign with the Olympiques. Once again he was averaging a point per game, earning 30 points including 15 goals in his first 30 matches.

But he’s had a change of scenery since then. Boudrias, a towering 6-foot-5 forward, was traded to the QMJHL’s Cape Breton Screaming Eagles last month. Boudrias had one assist in his first five games with the Screaming Eagles.