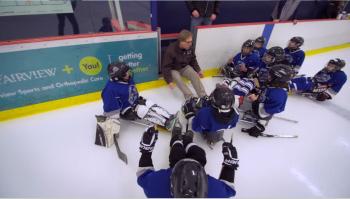 A scene from The Tournament by Sam Vint

“It was going to travel to festival screenings globally. But that all went away in two weeks.” — Métis filmmaker Sam Vint
By Sam Laskaris
Local Initiative Journalism Reporter
Windspeaker.com
WINNIPEG

But like many others, the Winnipeg resident has been forced to adapt to the times because of the COVID-19 pandemic.

As a result, The National Film Board of Canada is having its world online premiere of Vint’s latest film, The Tournament, today (Wednesday).

The 22-minute film focuses on the Manitoba Sledgehammers, a youth sledge hockey team as it participates at a tournament in Wisconsin.

Sledge hockey is an adaptation of hockey. Players utilize mini hockey sticks to navigate on the ice, as well as shoot and pass the puck.

The Sledgehammers’ roster includes Vint’s son Isaac, one of the principal characters in the film, who is now nine. Vint’s 13-year-old daughter Cooper is also on the squad.

“It was supposed to do the festival season for a year,” Vint said of his film.

But in mid-March, when COVID-19 began spreading in earnest across Canada, discussions began to take place on alternative methods to get the film out.

“It was going to travel to festival screenings globally,” he said, adding his movie had been accepted into film festivals in New Zealand and Germany. “But that all went away in two weeks.”

Vint is content The Tournament, his fifth film, is out online now.

The link to the film is available for free here: https://www.nfb.ca/film/tournament-the/

The movie can also be seen through the National Film Board of Canada’s website as well as its YouTube channel.

The tournament follows the Sledgehammers as they participate at a tournament in the Minnesota city of Blaine in March of 2018.

Besides showing the Sledgehammers in action on the ice, the movie also features dressing room scenes where team members trash talk their opponents, much like any squad would do.

Also featured are scenes with the club throughout their weekend getaway, including scenes with players enjoying some leisure time in their hotel pool as well as at a post-game pizza party.

“This isn’t a film about disability but rather a film about adaptability, mindset, attitude, being resilient, using teamwork, competitive spirit and determination,” Vint said. “It’s a great example of diversity and inclusion.”

Vint said his son was not originally pencilled in as the lead character of the film.

“We discussed it for a couple of years,” he said. “We had other people in mind who were going to be the focus but then they aged out.”

The Sledgehammers’ roster features those who are 17 and under.

Vint said over the years two others had been seriously considered to be the focus of the film.

Individuals with physical challenges as well as able-bodied athletes compete on the team.

Isaac Vint was born with spina bifida and uses a wheelchair. He was introduced to sledge hockey at the age of four.

His sister is able bodied and has been a member of the Sledgehammers since she was nine.

When former members of the Sledgehammers were no longer eligible to compete for the squad, Vint said it quickly became evident his son would be a good fit to be the film’s focus. “He’s outgoing and very loud,” he said. “He’s great for TV and he loves to talk. It was easy to focus on him,” he said.

As is evident from the film, the youngster was more than a willing participant and eager to ham it up for the cameras.

“It was pretty fun,” said Isaac, who is finishing up his Grade 4 studies at Ecole Luxton, a French immersion school in Winnipeg.

The youngster, who lists his hometown Winnipeg Jets as his favourite National Hockey League squad, said he was a bit surprised at how much filming was done.

“They taped everything I said,” he said, adding he was glad certain parts were edited out.

The Tournament follows the Sledgehammers as they square off against other sledge hockey teams dubbed the Minnesota Wild, Colorado Avalanche and Wisconsin Skeeters.

And what was the highlight of that event for Isaac?

“Just being there with my friends and playing,” he said.

The Sledgehammers are the only youth sledge hockey team in Winnipeg. Their season traditionally runs from September through March.

The club primarily stages practices and scrimmages. In recent years the squad has also been travelling to a tournament once a year.

When possible, the Sledgehammers also schedule exhibition contests against local hockey teams, who agree to take part in a sledge hockey match.

Over the years Vint has had numerous research, sound and camera roles in the film and television industry.

The 49-year-old is now focusing his efforts on writing and directing documentaries, including Alice & Kevin, a film about a mother who is fighting for services for her disabled son in a remote Indigenous community.