Wacey Rabbit coming back to Turtle Island for the upcoming season 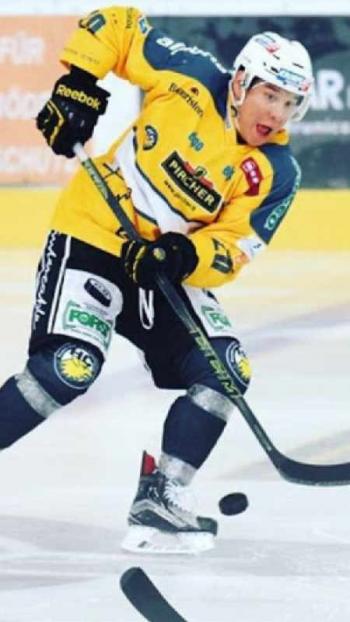 “I was trying to get a deal done in Europe, but those were more steps sideways than forward.” —Wacey Rabbit

Wacey Rabbit will indeed be back playing hockey in North America this coming season. He’s just not quite sure where yet.

The 30-year-old, who is a member of Alberta’s Blackfoot Nation from the Blood reserve, has spent the past five years playing pro hockey abroad.

For starters, he toiled three years in Norway, followed by a season in Japan. Rabbit then suited up for a squad in Italy this past season.

Though he will be playing in North America for the 2017-18 campaign, there is a good reason Rabbit isn’t 100 per cent certain of the exact location.

He has received an invitation from an American Hockey League (AHL) squad to attend its training camp.

In an interview with Windspeaker on Wednesday, Rabbit, who lives in Calgary during the hockey off-season, said he cannot reveal the name of the club yet. He’d prefer to wait until the squad makes an announcement first.

Rabbit is scheduled to report to the team’s training camp during the third week of September.

Even if Rabbit does not end up sticking with the AHL franchise, he has a deal in place to suit up for that organization’s East Coast Hockey League affiliate.

“I was trying to get a deal done in Europe,” Rabbit said. “But those were more steps sideways than forward.”

One of the opportunities Rabbit explored was with a team in Poland. He had looked into the possibility of eventually playing with the Polish national men’s team.

In order to be eligible to play for the Polish squad, Rabbit would first have to play two seasons in the country’s domestic pro league.

Discussions about possibly playing for the Polish national team arose because one of Rabbit’s hockey contacts, Ted Nolan, an Ojibwe who is a former NHL player and coach, was recently hired as the head coach.

Though Rabbit was offered a contract by a Polish team for this coming season, he was hesitant to accept it, especially when that squad had some off-season personnel moves.

“You have to be careful with some of those places in Europe because you can spend all season chasing to get your money,” Rabbit said.

Besides, Rabbit was keen to return to play in North America. When he first went to Norway, the plan was to stay abroad for just one season.

Rabbit had played for the AHL’s San Antonio Rampage during the 2011-12 season.

“After my year in San Antonio I think I kind of jumped the gun early and went to Europe,” he said.

Fearing there would be an NHL lockout in 2012, Rabbit felt numerous NHLers would end up playing for AHL clubs that fall. And he felt the trickle-down effect could potentially leave him without a spot on an AHL team.

So, while exploring his European opportunities at the time, he accepted the chance to head to Norway when he was offered a contract there. An NHL lockout did materialize that September, which lasted until January of 2013.

Another reason why Rabbit was keen to return to North America is because he’ll be closer to family. His father Marvin has not seen him play a pro game since he was in San Antonio. His mother Marlene though had travelled to Norway one winter to visit him and see him play during the Christmas holidays.

Rabbit had also explored the possibility this summer of playing pro in England for the upcoming season.
Though he opted not to take that route, he’s confident that in a few years he will finish off his playing days by suiting up for a squad in England.

While playing pro in England there’s also the opportunity over a two-year period to return to school and earn a Masters degree.

“I think there’s four or five teams offering that,” he said.

As long as he remains healthy and productive, Rabbit is playing to play pro until he’s at least 34.

Though he has not played a single game in the National Hockey League yet, Rabbit has not completely abandoned that dream.

Besides, if he does end up playing for an AHL squad this season, he’ll be just one step away from being possibly called up to play in the NHL.

“That’s why I wanted to come back to North America and give it one last kick at the can,” he said. “As long as my body is willing, I’ll always have that dream to play in the NHL.”

As inspiration, Rabbit only needs to look at the career of one of his former San Antonio teammates, Bracken Kearns. He didn’t play his first NHL game until he was 30.

Kearns, who is now 36, has played a total of 42 NHL games and signed a contract with the New Jersey Devils in July.