Virtual NAIG to engage athletes across the country 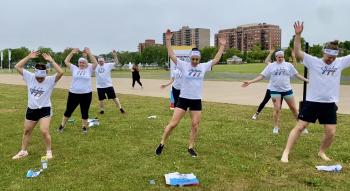 NAIG staff during the taping of a workout for virtual NAIG. Photo by Paul Forrest

“We want people to feel welcome to contribute. And we want to engage with all the participants that would have been coming.” — Fiona Kirkpatrick Parsons
By Sam Laskaris
Local Journalism Initiative Reporter
Windspeaker.com

The show must go on even during a pandemic.

That’s the thinking of organizers of the North American Indigenous Games (NAIG), a multi-sport competition that was originally scheduled to be held this month in Halifax.

Due to COVID-19 concerns, however, officials announced in late March that they would be postposing this year’s Games until July of 2021. The plan is for Halifax to host next year’s competition.

For the past couple of months, however, Games’ officials have been busily preparing for a virtual event, dubbed NAIG at HOME, which kicks off on Saturday and continues until July 18.

The event will include virtual competitions and activities as well as informative panel discussions.

“People are excited,” said Fiona Kirkpatrick Parsons, the chair of the Halifax-based NAIG. “It’s actually overwhelming. Every delegation is so stoked to connect with the athletes and be a part of this.”

Representatives from 26 teams (provinces, territories, states or regions) from across Canada and the United States typically take part in NAIG. Before it was postponed, more than 5,000 participants had been expected to show up in Halifax.

It’s unknown, however, how many will take part in NAIG at HOME.

“It’s not a replacement for the Games by any means,” Kirkpatrick Parsons said. “It’s a way to bring our youth together and have some fun.”

Kirkpatrick Parsons said while NAIG at HOME has been a focus in recent weeks, organizers are also still working on organizational details for next year’s NAIG.

NAIG at HOME is not only for those athletes who had qualified to compete at this year’s Games.

“Anybody that wants to can be involved,” said Kirkpatrick Parsons.

The only activity that requires registration is a virtual walk/run that will be staged on Sunday and can be completed by July 17.

Participants can choose between a 2-kilometre, 6-kilometre or 10-kilometre route.

Registration is only required so officials can keep track on the number of individuals who take part.

Though the official kickoff for NAIG at HOME will be Saturday, the event does technically begin today (Friday) with a virtual marketplace.

“It’s an opportunity for artists and vendors from across Turtle Island to participate in a virtual marketplace,” she said.

As of Thursday, a dozen vendors had registered to be part of the virtual marketplace. Those who browse and are interested in purchasing items will be directed to the personal websites of the vendors.

A virtual Mawio’mi (powwow) begins today (Friday) and continues for the week. Individuals are asked to send in dancing, singing and spoken word videos which will then be shared through various social media networks.

“We want people to feel welcome to contribute,” said Kirkpatrick Parsons. “And we want to engage with all the participants that would have been coming.”

Saturday’s official NAIG at HOME launch will include greetings from various representatives.

A week-long BINGO game will also be launched tomorrow. A total of 20 activities will be listed on the BINGO cards.

These activities will include various athletic challenges or exercises. Getting outdoors to enjoy some nature is one of the easier activities to take part in.

Those taking part in the BINGO game are asked to take pictures of their activities and tag organizers on social media. Those who complete a line or a full BINGO card will be eligible for some yet-to-be-announced prizes from organizers.

NAIG at HOME will also include a handful of panel discussions, which people can tune in for.

An Indigenous Mental Health panel will be held on Tuesday (July 14) at 7 p.m. (EST).

“Of course, (mental health) is a critical part of sports performance,” said Kirkpatrick Parsons. “I think that will be a really important one.”

Horn-Miller, a Mohawk from Kahnawake, Que., was the co-captain of the Canadian women’s water polo squad at the 2000 Summer Olympics held in Sydney, Australia.

Another panel scheduled for next Friday will be dubbed Coaches & Captains: Supporting Good Mental Health.

There will also be a panel on Thursday for athletes transitioning to coaching.

The NAIG were first held in 1990 in Edmonton. The Games have been held eight other times since then, most recently in 2017 in Toronto.

The Games have been staged primarily in Canadian locations. NAIG has been held just twice in the United States, in the Minnesota city of Blaine in 1995 and in the Colorado capital of Denver in 2006.