Trey Lewis put education first but hockey is calling him back 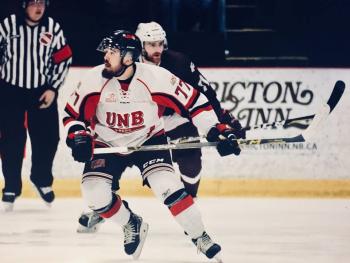 “He is a guy that will bring some added grit to our team and a boat load of character. He's a winner.” — Blaze coach Danny Stewart

Now that he’s mere weeks away from completing a Business degree, Trey Lewis believes the time is also right to begin his professional hockey career.

On Tuesday it was announced that Lewis, a 25-year-old Mi’kmaq defenceman, had signed a deal with the Coventry Blaze in the United Kingdom-based Elite Ice Hockey League (EIHL).

The 11-squad EIHL is the highest level of pro hockey in the U.K.

There was speculation Lewis, a member of New Brunswick’s Elsipogtog First Nation, could have turned pro as many as five years ago.

Back in 2013 he was the co-captain of the Quebec Major Junior Hockey League’s Halifax Mooseheads that captured the Memorial Cup, the top prize in Canadian junior hockey circles.

But instead of turning pro then – probably in a North American minor league circuit – Lewis opted to use up his final season of junior eligibility and then continue his academic/athletic pursuits at the university level.

“Throughout my junior career I was thinking about the path I would take,” said Lewis, who lives in Aldouane, a community located mere minutes from his First Nation. “I didn’t want to play pro (right after junior) and then retire after a few years and then have nothing else under my belt.”

Lewis returned to the Mooseheads after their Memorial Cup championship season and began the 2013-14 campaign as one of Halifax’s overage players. But since clubs can only dress a maximum of three players that have already turned 20 once the season commences, Lewis was deemed expendable after appearing in 11 contests with the Mooseheads.

He finished his junior career with the New Brunswick-based Miramachi Timberwolves, a Junior A club in the Maritime Junior Hockey League.

Lewis, a stay-at-home blueliner, then entered the Canadian university hockey ranks. He spent two seasons at Nova Scotia’s St. Francis Xavier University before transferring to the University of New Brunswick in 2016.

Since he transferred schools, Lewis was not eligible to play university hockey during the 2016-17 season. Instead he toiled for the Elsipogtog Hawks, a Senior men’s hockey squad.

As for this past season, Lewis was a member of the University of New Brunswick club that captured an Atlantic University Sport title and placed third at its national championship.

Lewis still has two seasons of Canadian university hockey eligibility remaining. But he doesn’t plan to use that eligibility since he is taking three courses now and will complete his university degree in mid-August.

Lewis, who has never travelled to Europe before, is expected to head to England to prepare for the Blaze season a couple of days after he finishes his schooling.

He’s had to weigh his offers before agreeing to sign on with the Coventry franchise.

“I had another offer from a team in Scotland in the same league,” he said. “And I had an offer from one team in Norway and a team in the ECHL (formerly East Coast Hockey League).”

The entire EIHL experience will be totally new to Lewis.

“I haven’t seen any highlight clips (of the league),” he said. “I’m just going from what other guys have told me.”

Lewis said the level of play in the EIHL is comparable to the North American-based ECHL, considered the second best minor pro hockey league on this continent.

Blaze coach Danny Stewart is thrilled his squad was able to sign Lewis to a deal.

“We are very happy to get Trey signed up next season,” he said in a news release issued by the club. “He is a guy that will bring some added grit to our team and a boat load of character. He's a winner. I've heard nothing but good things about his commitment to whatever club he's been a part of.”

Stewart believes it won’t take long for Blaze supporters to take a liking to Lewis.

“I think our fans in Coventry are going to love this guy, his compete levels will be second to none,” Stewart said.

The Blaze is one of six franchises based in England that will compete in the EIHL this coming season. The others are Guildford Flames, Manchester Storm, Milton Keynes Lightning, Nottingham Panthers and Sheffield Steelers.

The three clubs from Scotland in the loop are Braehead Clan, Dundee Stars and Fife Flyers.

Lewis inked a one-year deal with the Blaze. But he’s aiming to play a handful of other pro seasons before he starts putting his Business degree to use.

“I’m hoping to play three or four more years of high-calibre hockey,” he said. “Hopefully my body holds up.”