Trade from Broncos to Cougars brought RBC Cup into focus 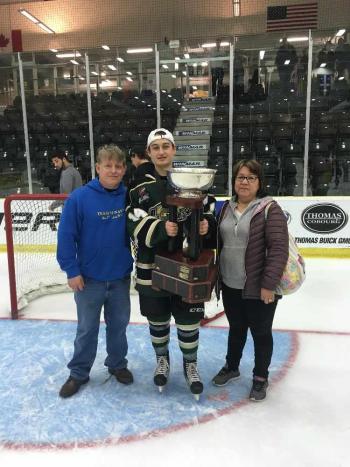 Daniel McKitrick, a 19-year-old right winger, is believed to be the first Inuk and the first person raised in Nunavut to win the RBC Cup

A mid-season trade turned out to be much better than Daniel McKitrick could have imagined.

McKitrick, an Inuk who grew up in the Nunavut community of Coral Harbour, started the 2016-17 season with the Saskatchewan Junior Hockey League’s Humboldt Broncos.

But then the Ontario Junior Hockey League’s Cobourg Cougars acquired McKitrick’s playing rights this past December. He had no qualms about heading to another club in another league and another province.

That’s because McKitrick knew he would be suiting up for a team that would challenge for a national title. As hosts, the Cougars were awarded an automatic berth into the five-squad RBC Cup tournament, the national Junior A championship.

As it turned out, Cobourg not only hosted the tournament. But it also ended up winning the event, which concluded this past Sunday.

McKitrick and his teammates edged the Alberta Junior Hockey League’s Brooks Bandits 3-2 in overtime in the championship final.

McKitrick, a 19-year-old right winger, is believed to be the first Inuk and the first person raised in Nunavut to win the RBC Cup, which has been awarded annually since 1996. Prior to that the national Junior A champs were presented with the Centennial Cup.

McKitrick actually arrived in Cobourg via what ended up being a three-team trade, which also involved the SJHL’s La Ronge Ice Wolves.

“I wasn’t expecting a trade,” McKitrick said. “And I didn’t ask for it. But some guy that got traded from La Ronge didn’t want to go to Cobourg.”

The individual who balked at reporting to the Cougars was Tristen Elder. Cobourg in turn traded his rights to Humboldt and acquired McKitrick.

“I was rather excited about the opportunity,” said McKitrick, whose mother Leonie is Inuk. “I wanted to go to Cobourg because I knew they were going to be hosting the RBC Cup.”

The Cougars though were not successful in winning an OJHL crown. That quest came to an end on April 6 when the Trenton Golden Hawks swept Cobourg 4-0 in their best-of-seven conference semi-final series.

That meant the Cougars had to wait 37 days between their final playoff game and the start of the RBC Cup tournament.

Despite being the hosts, the Cougars were considered underdogs heading into the national tourney. That’s because the other four entrants had won their own leagues or had success in regional qualifying events across the country.

Besides Cobourg and Brooks, the others that competed at the RBC Cup were the Golden Hawks, the British Columbia Hockey League’s Penticton Vees and the Quebec Junior Hockey League’s Terrebonne Cobras.

McKitrick said his side was not concerned about its lengthy break prior to the nationals.

“We practised pretty hard,” he said. “Going into the tournament we went in there thinking that we were going to win it. And that’s what we did.”

The Cougars finished atop the tournament’s round-robin standings by winning three of their four contests. Cobourg then earned a spot in the championship match by beating Penticton 3-1 in their semi-final, thanks in part to McKitrick who scored a goal in that outing.

The Bandits were hoping they’d be the ones celebrating following Sunday’s final. Brooks held a 2-1 lead in the late stages of the third period. But the Cougars sent the game into OT by scoring with 67 seconds remaining in regulation time.

McKitrick said his club remained upbeat, even as they were trailing and the third period was coming to an end.

“We’ve come back so many times all year,” he said.

McKitrick, who is hoping to eventually play at the university or college level in the United States or Canada, has one season of junior eligibility remaining. He’s not sure where he will end up playing next season.

McKitrick had yet to discuss his future with the Cougars’ brass in the days following their national title. But since it will be his final junior campaign, he wants to play on a competitive squad.

That might mean asking for a trade out of Cobourg, a club which is expected to lose several of its key stars off its championship team.

“I think it’s a bit too early for that,” he said. “I’ll see in the summer what is going on. I might go somewhere else. But I’ll take it one day at a time. We’ll have to see what happens.”

Cougars’ general manager Brent Tully said his team’s rebuilding job might not be as challenging as some expect.

“Potentially we could have four defencemen and five or six forwards coming back,” he said. “You look at it that way and it’s not as big a rebuilding job as it might appear to be.”