Tournament turns into a festival of basketball 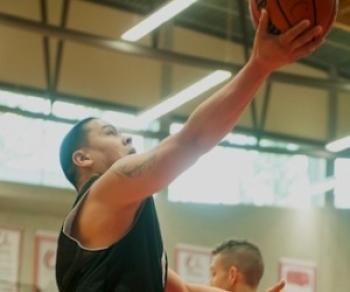 It certainly didn’t take long for a West Coast basketball event to grow from a small tournament to a Native hoops festival. In 2014, Vancouver’s Native Education College staged an inaugural basketball tournament in order to give its school teams an opportunity to play against some other squads.

It certainly didn’t take long for a West Coast basketball event to grow from a small tournament to a Native hoops festival.

In 2014, Vancouver’s Native Education College staged an inaugural basketball tournament in order to give its school teams an opportunity to play against some other squads.

That event, which was held at the Musqueam Indian Band gym, attracted 17 squads from across British Columbia.

The tournament grew to 20 teams, including three from Alberta, in 2015, so organizers opted to move the event to Burnaby’s Simon Fraser University to utilize its four gyms, as opposed to the lone gym at Musqueam.

As for this year’s event, held May 20 to May 22, it was once again staged at SFU. And the event experienced significant growth as organizers capped the number of entrants at 32 teams. The participating squads included two from Alberta and one from the state of Washington.

“All the feedback we’ve had is that was a really positive environment,” said festival director Claire Askew.

She was also glad to see the festival reach its maximum capacity this year, a couple of months before the event kicked off.

“It was a huge increase for us,” Askew said. “And we had about 15 teams on the waitlist.”

Askew believes one of the reasons so many squads are interested in this event is because the tournament registration fee is rather low. Clubs only paid a $200 entry fee.

“We wanted to make it affordable for all the teams, but especially for the out-of-town teams because their expenses were so high,” said Askew, who also co-ordinates a NEC athletic and cultural program called the Wellness Warriors.

The host NEC entered three teams in the festival. One of these clubs ended up winning the co-ed division.

Teams from Ahousaht took top honors in both the girls’ and boys’ youth divisions, for those players under 18. The Maaqtusiis Ma’as won the girls’ category while the Maaqtusiis Hoyas took home the boys’ title.

Other winners included a Vancouver side dubbed Vancity, which captured the men’s division, and a team called People Of All Nations, which won the women’s category. Also, North Vancouver’s Txayusem emerged victorious in the masters division, which was for players 35 and over.  The masters division was open to both sexes, however, only men took part.

The festival also included a pair of free basketball camps for Aboriginal youth. Steve Hanson, the head coach of the SFU varsity men’s squad, was among those instructing at the camps.

Others that were helping out at the camps included players from both the SFU women’s and men’s teams.

William Lindsay, the director at SFU’s Office for Aboriginal Peoples, is hoping the fact the festival was held at the university will have a lasting and inspiring effect on some of the participants.

Lindsay, who is Cree, certainly has fond memories of visiting a post-secondary school in his early teens. When he was 13, Lindsay’s school had a field trip at the University of British Columbia.

“Over 40 years later I still distinctly remember that day,” said Lindsay, who was so inspired being in a university setting that he went on to become a college professor and has worked at both UBC and now SFU.

Lindsay was pleased that through this festival numerous Aboriginal players were introduced to a university campus he now works at. He saod one of SFU’s cornerstone philosophies is community engagement.

“Having this tournament here is an endeavour of that community engagement,” he said.

Organizers were able to run this year’s festival in part because they attracted 17 different sponsors. But Askew said all of these sponsorships were for this year only. And she’s not sure how many organizations will continue their sponsorships.

In order for the festival to be held again and for it to continue to grow, Askew said organizers need to track down some more money, hopefully including a major sponsor.

“We’re trying to get a substantial source of funding,” she said, adding organizers would like to increase the number of competing squads to at least 40 in 2017.