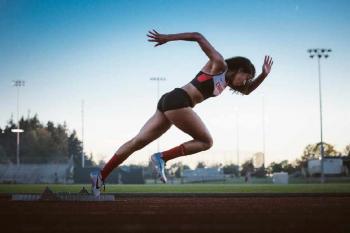 Joy Spear Chief-Morris received some good news during her recent relocation. The 23-year-old hurdler, a Blackfoot from Alberta’s Blood Tribe, moved to California this past week in order to train with the Santa Barbara Track Club.

This past Friday Spear Chief-Morris received a phone call informing her that she will be receiving a Tom Longboat Award, as she has been chosen the female athlete of the year by the Aboriginal Sport Circle (ASC).

The ASC, the national governing body for Aboriginal sports in Canada, has picked James Lavallée, a Métis kayaker from Winnipeg, as its Aboriginal male athlete of the year. See our story here: http://www.windspeaker.com/news/windspeaker-news/kayaker-gets-the-nod-for-this-years-tom-longboat/

Both selections were publically announced on Monday.

Spear Chief-Morris and Lavallée will receive their awards on Nov. 9 in Toronto. They will be honoured in conjunction with Canada’s Sport Hall of Fame induction ceremony.

“For me it’s a nice recognition for financial reasons because it comes with (a $1,500 award),” Spear Chief-Morris said of her accolade. “I’m training full-time and I don’t have a lot of funding. It’s also a great honour to be recognized as an Aboriginal athlete in Canada.”

The ASC will be covering expenses for Spear Chief-Morris and one guest to attend the ceremony in Toronto. She will be taking her mother Wilma, who lives in Lethbridge, Alta.

Spear Chief-Morris, who is hoping to represent Canada at the 2020 Summer Olympics in Tokyo, opted to continue her training in the U.S.

“I was looking for a change in my training environment,” said the 100-metre hurdles specialist.

She’ll be training alongside many elite American athletes who are also part of the Santa Barbara Track Club.

While in California, Spear Chief-Morris plans to train six days a week, four hours per day. She also plans to earn some money working as a nanny and also doing some other odd jobs.

Spear Chief-Morris was born and grew up in Lethbridge.

After her high school days were complete, she enrolled at the University of British Columbia in Vancouver where she was a member of the school’s track and field team.

But after two years at UBC she transferred to Western University in London, Ont. She spent three years at Western, completing her degree this past spring in History and First Nation Studies.

Spear Chief-Morris also starred for the Western Mustangs’ track and field squad during her Western days.

During the past three years she won eight medals at Ontario University Athletics meets. And she also captured seven medals at national U Sports (formerly Canadian Interuniversity Sport) competitions.

Spear Chief-Morris was also an academic all-Canadian during all five of her university years.

It is believed that the national Aboriginal awards were last handed out in 2010. They had been an annual tradition within the ASC since the organization was founded in the late 1980s. But the ASC had been inactive the last half dozen years or so since its funding was cut off by Sport Canada.

Though the ASC had not been functioning due to a lack of funding, all 13 provincial or territorial Aboriginal sports organizations across Canada were still up and running.

The ASC was revived earlier this year when Sport Canada once again began offering some funding, to the tune of $800,000 annually.

With the ASC back in business now it was able to once again start handing out its Tom Longboat Awards.

The awards are named in honour of the legendary runner from Six Nations. Longboat was one of the world’s elite long-distance runners in the early 20th century.

Spear Chief-Morris is uncertain when the next meet she will compete in will be. But she anticipates she’ll be taking part in various competitions in California and in the state of Washington in the coming months along with members of her new club.

She has also set her sights on participating at the world indoor track and field championships, scheduled for next March in Birmingham, England.

Spear Chief-Morris believes the roster for the Canadian squad that will take part in Birmingham will be selected based on those who meet certain qualifying standards.

Spear Chief-Morris has already participated in one major international meet. Back in 2014 she was a member of the Canadian squad that competed in the North American, Central American and Caribbean Athletics Association’s under-23 meet held in Kamloops, B.C.