Sports Summit in Yukon a big hit with participants 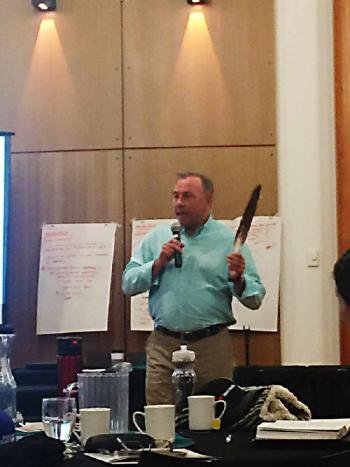 “[Aboriginal Sport Circle] needs to develop Truth and Reconciliation Commission of Canada (TRC) principles and be seen as the leader of the TRC education to the sport and physical activity community.”—Alwyn Morris

The governing body of Aboriginal sports in Canada, which was revived earlier this year, is already making some history. The (ASC) staged its first summit, a three-day event which concluded on Sunday in the Yukon capital of Whitehorse.

“It was a huge success,” said Heather Kaulbach, the ASC’s executive director.

About 80 participants took part in the summit. This included representatives from the various provincial and territorial Aboriginal sports bodies in the country.

Others who attended included officials from national sport and multi-sport organizations, and political figures.

“We had three (Yukon) ministers that came into our sessions and took part,” Kaulbach said.

Gord Reed, the president of the Yukon Aboriginal Sport Circle, is the one who had suggested Whitehorse as the location for the ASC’s inaugural summit.

“We graciously accepted his offer,” said Kalbauch, who works out of the ASC’s office in Ottawa.

Reed, who is also a ASC board member, said he was keen to stage the summit in Whitehorse.

“The reason I really wanted to bring it to Whitehorse was to show off our culture and also demonstrate some sports as well,” he said.

That mission was accomplished. That’s because summit attendees were entertained by a pair of Indigenous dance groups, including the  Dakhká Kwaan Dancers, a nationally recognized award-winning group.

Reed himself is one of the performers of the Dakhká Kwaan Dancers.

A number of Arctic Sports activities, including the Alaskan high kick and one-foot and two-foot high kicking, were showcased. Several of those who attended the summit also stepped up and took part in the activities after they had been demonstrated.

Reed said he had no concerns about people travelling to Canada’s north to attend the summit.

“We have an international airport that services a great number of people,” he said. “And in terms of our meetings, we have a great facility.”

All of the summit events were held at the Kwanlin Dun Cultural Centre. Even when summit participants broke off into separate sessions, there was sufficient space in the centre’s meeting rooms to accommodate those present.

In the past various representatives from the ASC and its various provincial and territorial association had held informal gatherings. But a summit such as the one staged in Whitehorse had never taken place before. Kaulbach wasn’t too concerned about where it was held, but more so that it was indeed staged and ASC officials plan to make it an annual event.

“We will move it around to various communities every year now.”

Kaulbach said staging the summit was important in order to raise awareness that the ASC has been revived and is back in business. She said the ASC is now willing and able to work with others and is keen to forge partnerships.

The ASC had been founded in the late 1980s. But earlier this decade the national organization virtually ceased to exist as it had all of its Sport Canada funding cut off.

But thanks in part to a legacy grant from the 2008 North American Indigenous Games and new Sport Canada funding, the ASC was revived earlier this year.

Former Olympian Alwyn Morris, who is now the ASC president, believes his organization has a key role to play.

“ASC needs to develop Truth and Reconciliation Commission of Canada (TRC) principles and be seen as the leader of the TRC education to the sport and physical activity community,” said Morris, who won a pair of kayaking medals (one gold and one bronze) at the 1984 Los Angeles Olympics. “The TRC will lead the way for new and valued relationship building”.

One of the ASC’s premier events is the annual National Aboriginal Hockey Championships (NAHC). This tournament, for Bantam- and Midget-aged players, has recently been attracting 16 clubs (eight female and eight male), representing provincial or regional areas across the country.

ASC officials are hoping they can also soon start holding national championships in other sports as well.

With the ASC revival earlier this year, the organization has also started to once again present its Tom Longboat Awards.