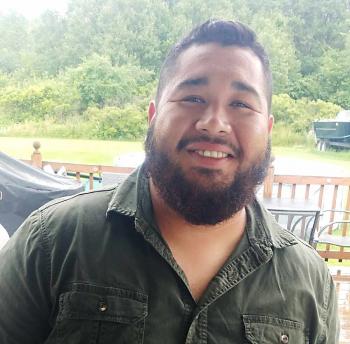 “Las Vegas was the inspiration of the team.”—Holdon Vyse

During his lacrosse career, Holdon Vyse managed to win a pair of prestigious national championships and also a medal at a world tournament, but primarily due to work commitments, Vyse was forced to put his lacrosse gear in storage a few years ago.

Vyse, a 29-year-old who lives in the Six Nations community of Ohsweken, has not suited up for a squad since helping his hometown Six Nations Rivermen capture the Presidents Cup, the national Senior B men’s box lacrosse championship, in 2015.

Vyse, who works six days a week as a heavy equipment operator, feels he could still play at a high level of lacrosse but simply does not have the time available to commit to a franchise. That’s because his job frequently takes him away from home for days, or even weeks a time.

But since he still has a desire to play, Vyse has founded the Six Nations River Rats. The plan is to have that men’s team be a tournament-only squad, travelling to various events.

The River Rats are hoping to compete in their first tourney, the Sin City Box Classic in Las Vegas this coming January. That tournament is scheduled for Jan. 24 to Jan. 27, 2019.

“Las Vegas was the inspiration of the team,” said Vyse, who was a member of the 2009 Six Nations Arrows that captured the Minto Cup, the national Junior A championship. “We’ll focus on that for now.”

Vyse said the idea to form the River Rats spawned from conversations he had with his wife Kylee, who will serve as the club’s manager. The couple have a daughter, Savannah, who turned one in March.

The River Rats will be a self-funded club. Vyse said flights and hotel rooms will cost about $16,000 to have 20 players (18 runners and two goalies) attend the Vegas tourney.

Vyse is hoping though that some local sponsors step up to help cover some of the team’s expenses.

“If we have to we will branch out (to try to find other sponsors),” said Vyse, who won a silver medal with the Iroquois Nationals at the 2011 world box lacrosse tournament in the Czech Republic.

“In a perfect world, we’ll be able to cover everything. We have a few different ideas how to raise money. That’s what we’re working on right now.”

The River Rats had their first informal meeting on Sunday in Ohsweken. A dozen local individuals showed up for that meeting.

“We were just giving them what information we have as of now,” Vyse said.

There has been considerable interest in the club. By sending out messages to former teammates, Vyse has already compiled a list of 50 players who have indicated they would like to play for the River Rats.

That includes a number of players from British Columbia and the state of New York. Vyse’s connections to the west coast stem from the fact he spent two seasons toiling at the Senior A level with the Coquitlam Adanacs.

Though the River Rats will be representing Six Nations, Vyse said the club will not feature just Indigenous players. He estimates 15 of the 50 athletes who have expressed interest in playing for the squad are not Indigenous.

“I don’t want to leave anybody out,” he said.

Vyse added he’s not concerned about the large number of players who have indicated they want to be part of the franchise. That’s because he believes not all of those individuals will be able to travel and compete in all events the River Rats hope to enter.

Vyse himself is already placing a limit on how many tournaments he thinks he could make.

“I’d like to get to three tournaments a year,” he said. “I don’t think I’d be able to play in more than that. But if I could, I would send teams to other events as well.”

Though the Sin City Box Classic is the only tournament the River Rats are currently making plans for, Vyse has looked into others.

“There’s a few tournaments in Michigan and even one in Texas that caught my eye,” he said.

Down the road he’d even like to have the River Rats participate in some European tournaments. He’s found events in England, France and the Czech Republic that seem appealing to him.

As for the name River Rats, Vyse said there’s a special reason he chose that moniker. His late grandmother Anne Logan founded a co-ed softball team in Six Nations called the River Rats that played in the 1970s and ‘80s.

Vyse’s grandfather Willie Logan is also a well-known figure in the community as he designed the Logan Special, a wooden lacrosse stick.