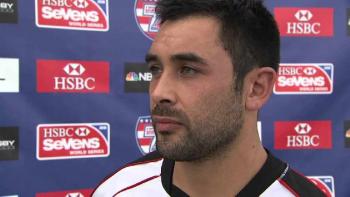 Phil Mack is a member of Toquaht First Nation on Vancouver Island, B.C.

“He’s got a tremendous work ethic. And he has a focus and intensity beyond anything we’ve seen.” — Adrian Balfour, the Seawolves’ CEO and team co-founder

Phil Mack will continue to do double duty, serving as an assistant coach while also playing for a rugby club. But the 32-year-old will be taking it up a notch in 2018 as coach and player for a professional franchise.

Mack has been appointed the assistant coach of the Seattle Seawolves, who will compete in the inaugural season of Major League Rugby (MLR) in 2018. The MLR is expected to feature seven American clubs in its first year.

Coaching and playing for the same team will not be a new experience for Mack, a member of British Columbia’s Toquaht First Nation. This year he was the assistant coach and also played for the BC Bears of the Canadian Rugby Championship. The Bears won the championship in this amateur league this year.

“I know I’m excited to get into something new,” Mack said.

The first MLR season is expected to be relatively short, running from April to June.

Mack, who currently shares a house in Victoria with his fiancé, is expected to head to Seattle at some point in January to prepare for the 2018 season. He will rent a place in Seattle, located in the state of Washington, and come home when his schedule permits.

And Mack isn’t ruling out a return to the Bears, who play a late spring and summer schedule, next year as well.

“If it lines up correctly, it’s something I’d consider doing again,” he said.

Mack will be working alongside a familiar face in Seattle. The Seawolves have hired Tony Healy to be their head coach. Healy, who is from Victoria, was the Bears’ head coach this year.

Besides Seattle, the inaugural season of the MLR is expected to feature six other franchises. They are the Texas-based Austin Elite Rugby, Colorado’s Glendale Raptors, Houston Strikers, Utah Warriors, NOLA Gold from New Orleans and a yet-to-be-named squad from San Diego.

Squads are expected to play an eight-game regular season schedule, resulting in four home games and four away matches per squad. Playoff action will then consist of semi-final contests and a championship final.

Adrian Balfour, the Seawolves’ CEO and team co-founder, said his franchise purposely wanted to bring in coaches from the northwestern part of North America.

“A lot of teams have brought in import coaches,” he said. “We wanted to do something different. That coaching team is phenomenal. You saw what they did with the BC Bears this year having an undefeated season.”

Balfour is hoping the Seawolves will be coached by Healy and Mack for many years to come.

“It’s something we want to stick with,” he said.

“He’s got a tremendous work ethic,” he said. “And he has a focus and intensity beyond anything we’ve seen.”

Balfour is unsure how long Mack will be able to continue his playing career.

“I’m not foolish enough to second guess him,” he said. “But it would be fantastic if he played for more than just one year.”

Mack is also unsure how much longer his playing days will last.

“It’s hard to say,” he said. “But I feel pretty good. It’s just a matter of taking care of yourself and getting the proper maintenance.”

Mack is confident the MLR will succeed. That’s even though another American-based professional circuit, PRO Rugby, which operated in 2015 folded after just one season of action.

PRO Rugby had five franchises in its one and only season. They were based in Columbus, Denver, Sacramento, San Diego and San Francisco.

PRO Rugby had a single investor with a model for a league. Mack believes the MLR is much better suited for success as each club buys into the league and so far more than 100 investors have come forward for the seven announced squads.

Suiting up and coaching the Seawolves will not be Mack’s first taste of pro rugby life.

Back in 2014 he trained with Ospreys, one of the top pro clubs in Wales. Though he never saw any game action with Ospreys he did appear in four matches with Neath Rugby Football Club, one of its top feeder squads.

Mack is also a familiar name in Canadian rugby circles.

Since 2009 he has appeared in 43 games with the national rugby team. He has also suited up for an additional 52 matches with the Canadian men’s rugby sevens side.

For the past several years Mack has also been operating the Thunder Aboriginal Rugby Team, which introduces the sport to Aboriginal youth in communities across British Columbia.

Mack is uncertain whether he’ll be able to devote time to this program in 2018, but said if he can’t there are others in place to keep it operating.