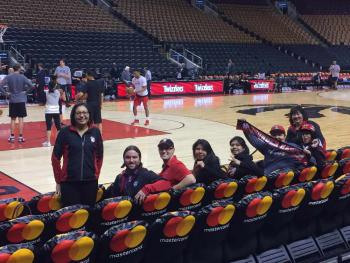 DFC representatives were invited to Toronto. They attended the Raptors’ contest versus the Orlando Magic. Photo by Aaron Guthrie

The school is run by the Northern Nishnawbe Education Council.

A northern Ontario high school for Aboriginal students has received a huge assist from the NBA’s Toronto Raptors.

The school, which is run by the Northern Nishnawbe Education Council, will use some of the money to upgrade its gym and buy new uniforms, shoes and socks for players on its teams.

The grant is one of three annually awarded to basketball, hockey and soccer organizations through the Maple Leaf Sports and Entertainment (MLSE) Foundation.

Aaron Guthrie, the coach of the DMC boys’ team, said his school had also applied for the same grant a year ago. He said MLSE officials told the school to reapply for the grant again as they were seriously considered but not chosen for the funding in 2016.

After tweaking their grant application, DMC officials were successful this time around.

“It was a very nice surprise,” Guthrie said. “But we were hopeful because we were close last year. You don’t know if they say that to everybody though.”

Besides some renovations at the school gym and outfitting the school’s players with some new gear, Guthrie also plans to help out numerous other First Nations in northern Ontario.

“What I’m also really looking forward to is to take the game of basketball into the 25 remote communities that feed into our school,” he said.

Guthrie plans to send basketball kits to those communities in the hopes of growing the sport further.

He’s also hoping to stage a 2018 tournament for prospective DFC students from those remote communities.

“I’d like to do a tournament here next year for Grade 7 and 8 students,” he said.

If this event does indeed come to fruition, Guthrie is hoping DFC students will help out with organizational details and other duties such as coaching and scorekeeping.

“I’d like to have our current students involved in a leadership way,” he said.

DFC currently has an enrolment of about 100 students, from grades 9 to 12.

Besides offering up the opportunity to play some hoops at DFC, Guthrie is hoping to show younger students all that the Aboriginal school has to offer. He’s hoping to alleviate any concerns of those who end up leaving their community in order to attend the high school.

DFC representatives were invited to Toronto and attended the Raptors’ contest versus the Orlando Magic on March 27.

Four students and four staff members made up the DFC contingent.

“They took care of all of our flights, hotels and meals,” Guthrie said. “And we had a private box for the game.”

“As we came in they had personalized jerseys sitting on our seats,” he said.

The DFC reps were also brought down courtside to watch the pre-game warmups.

“He came over and shook everybody’s hands and said hello,” Guthrie said.

Michael Barrett, the executive director of the MLSE Foundation, said the Thunder Bay high school is a model program to support.

“We are passionate about growing sport in the places that need it most across our province,” he said.

Though DFC was established in 2000, it has only had a boys’ basketball team for the past three years.

Because of DMC’s small enrolment, SSSAA officials allow the school to compete in the JV division, even though it also has senior athletes on its roster.

Guthrie said it is tough to maintain any roster consistency on DFC teams.

Guthrie guided his charges to a 3-11 regular season record this season.

Meanwhile, this marked the first year of operations for the DFC girls’ team. The club, like its male counterparts, participates in the SSSAA’s Junior Varsity division despite having some senior-aged athletes.

The squad registered a 1-13 mark in its inaugural campaign.