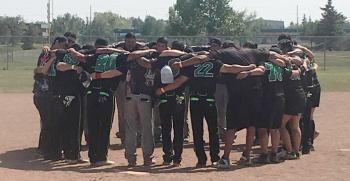 Players from both sides met on the diamond for a group prayer afterwards. Photo courtesy of Kodie Big Plume.

A pair of familiar foes once again squared off in the championship final of the Native World Series.

But the conclusion to the co-ed slo-pitch tournament, which wrapped up on Sunday in Calgary, was one nobody could have predicted.

That’s because following a pair of unfortunate incidents in the championship final, co-champions were declared in the event, which attracted 48 squads, primarily from provinces in western Canada.

The co-champions are teams named Extreme Kaoz and Native Dynasty. Both clubs are from Alberta’s Tsuut’ina Nation, which hosted the tournament.

This marked the fourth straight year the same two squads had advanced to the championship final. Extreme Kaoz entered the 2018 tourney as the two-time defending champs while Native Dynasty had won the 2015 title.

This year’s final though came to an end after less than one inning in the scheduled seven-inning affair.

In the bottom of the first inning Extreme Kaoz pitcher Steve Wagner was hit in the face by a line drive. He didn’t have time to react to the hit.

“Both teams cleared the benches and tried to help out as much as possible,” said Tyler Cutknife, who not only plays but also organizes the Native Dynasty club.

“He was down for about 5-10 minutes. He was conscious and talking. Everybody was just trying to stop the bleeding.”

An ambulance arrived and took Wagner to the Rockyview General Hospital. After some tests, including a CAT Scan and some X-rays, it was determined Wagner not only had a broken nose but also three facial fractures around his right cheek and eye.

After receiving seven stitches Wagner was released from hospital late Sunday night. He’ll need to go back to hospital after the swelling on his face goes down in order to repair his nose and get some plastic surgery.

While the Wagner incident was happening, one of the Extreme Kaoz players, Isaiah Eagletail, had his father collapse near the diamond from heat exhaustion.

“He was able to walk away on his own two feet,” he said.

Following the commotion of these two incidents, members of the Extreme Kaoz side were planning to forfeit the game. But Cutknife wasn’t having any of that.

“It didn’t seem right to accept that,” Cutknife said of the proposed forfeiture. “They didn’t ask to be in that position. How can you continue to play?”

Instead, members of both clubs agreed to be declared tournament co-champions. Players from both sides met on the diamond for a group prayer afterwards.

And they ended up evenly splitting the $10,000, which would have been awarded to the winners and the $5,000 for the second-place finishers. Each squad took home $7,500 in prize money.

A decision, however, still has to be made what to do with the first- and second-place trophies. Since both teams are from the same First Nation, Cutknife said it might make sense to simply display both trophies at the band office.

“We did the right thing,” Cutknife said of the decision not to continue playing the championship final. “It really is just a game.”

Wagner was at the hospital when he heard that the remainder of the match had been cancelled.

“Both teams are very close,” he said. “When I heard they stopped everything, it was something special.”

Wagner assumed the contest would continue on after he was sent to hospital.

“In the back of my mind I thought they would just continue playing,” he said. “An hour later I heard they just shut it down. I couldn’t believe it.”

Wagner, a 41-year-old who lives in Wetaskiwin, Alta., said since he is a pitcher he has had countless other close calls to getting injured before. He estimates a ball is hit back directly at him once every tournament he plays in.

On all previous occasions he had managed to get his glove up, his hand up or duck out of the way. But he wasn’t able to do that on Sunday.

“It was a very well hit ball,” he said. “I couldn’t react fast enough.”

Wagner’s son, 19-year-old Landon Crier-Wagner, witnessed the incident as he too is a member of the Extreme Kaoz squad. Crier-Wagner was playing right field when his father was struck.

Cutknife said in part because of the competitive nature of players from both squads, members of the two clubs were not always on the best of terms.

“In the last two years though things have been great between us,” he said. “We’re leading by example. Everybody looks up to us.”

And no doubt even more so now following Sunday’s decision to be declared co-champs in a prestigious tournament.